Recently Eric Cantor’s Young Guns PAC and those who loyally serve Eric Cantor have received a tremendous amount of negative publicity because of their successful and unsuccessful efforts to slate conservative delegates. Slating is a parliamentary procedure used in local GOP Mass Meetings to remove the rights of delegates (and in this case conservatives) to attend the upcoming GOP conventions and vote for their preferred candidate. It seems that the pressure is getting to them and they are starting to come undone at the seams. 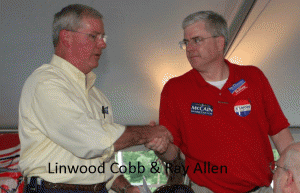 Linwood Cobb is the 7th District GOP Chairman. He has held the position for over a decade and is a close confidant to Eric Cantor’s consultant, Ray Allen. The Bull Elephant has confirmed that Linwood Cobb knew there was going to be an attempt to slate the 3rd District delegates in the Henrico Mass Meeting earlier this week. Mr. Cobb is also fully aware of the successful slating that took place in Virginia Beach against Curtis Colgate.

Despite Linwood’s full grasp of recent current events, Linwood Cobb is twisting the words of Pat Mullins and calling him a liar. You can see from the Facebook thread that Pat Mullins firmly denounced slating taking place anywhere in Virginia. Mr. Cobb calls Pat Mullins a liar for something he never even stated. 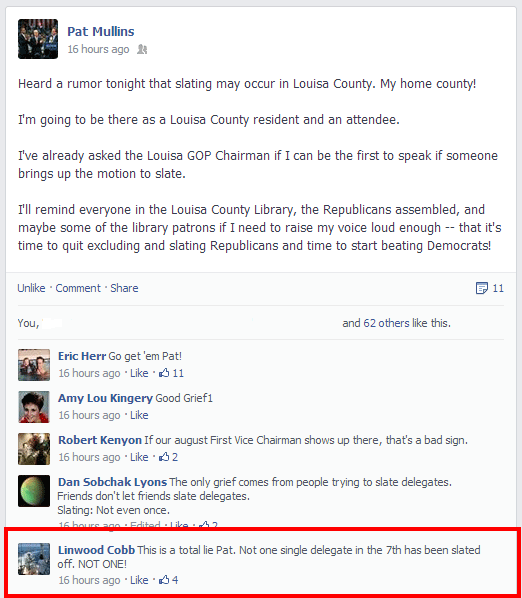 Linwood Cobb should note that Chairman Mullins is not the only elected official to denounce the recent activities of Mike Thomas, Ray Allen and Cantor’s Young Guns. State Senator Bill Stanley, Congressman Rob Wittman, Congressman Scott Rigell and senate candidates Shak Hill and Ed Gillespie are just a few who have publicly demanded that the recent underhanded tactics come to a halt.

Mr. Cobb is an elected member of the Republican Party of Virginia State Central Committee. It is highly inappropriate, not to mention unprofessional, for Mr. Cobb to be calling the GOP Chairman a liar – and doing it on social media no less.

Mr. Cobb is being challenged by Fred Gruber for the 7th District GOP Chairman. The election is scheduled for May 10th at Deep Run High School in Glen Allen.

One final note – no slating took place or was attempted in Louisa County. The meeting was run professionally and they had a good turnout of well over 100 people.

UPDATE: Linwood Cobb has chosen to comment on this post. We want to give him fair hearing and don’t want his statement to get buried in the comment field, so we will post here as well: “I never called Pat Mullins a liar. I was referring to the so called rumor. The rumor was the lie.” ~Linwood Cobb

It is very dangerous to use “total lie” and “Pat” next to each other in a sentence – it looks like an appositive. It gives the wrong impression, especially since the following sentence makes it appear that Mr. Cobb is accusing Mr. Mullins of lying about 7th district slating IN THE PAST, which Mr. Mullins did not state.

It is unfortunate that Mr. Cobb could not convince his friend, Ray Allen, and Eric Cantor’s Young Guns not to slate and exclude in other parts of the state – then people would not be so overly concerned about slating happening elsewhere.