Join The Bull Elephant for blow-by-blow coverage of the unfolding drama in Virginia’s 5th Congressional District, as Jon Berkley and Mark Lloyd square off to succeed Sen. Bill Stanley as Chairman of the District GOP.

REFLECTIONS AND BACK STORY OF WHAT TOOK PLACE TODAY WILL BE POSTED IN A SEPARATE BLOG LATE TOMORROW NIGHT. PLEASE CHECK BACK.

5:48PM It has been confirmed that they had an overvote on Franklin County and the numbers reported in Rappahanock were completely backwards. Raw vote was actually 12 Lloyd and 0 for Berkley. It was reported and counted in the reverse.

3:26PM BREAKING: They wait until most of the crowd leaves and make motion to remove voting privileges of 5th district state central committee members to vote on the 5th District Committee, according to Article 4 Section E of the RPV Party Plan.

Claim was that these state central committeman don’t support their local unit.

Diana Shores makes a point of inquiry of whether or not a quorum was necessary to take a vote. Chairman Marsden said no.

People are confused and don’t understand vote. It was ruled passed by voice vote.

Other candidate who is a student from Liberty University, Bruce Hartwick, withdraws and throws his support behind Mark Lloyd. Stated his disappointment of Campbell County not being seated.

Mark Lloyd gives closing speech. Stated that the Republican Party can not win with subtraction and division. We must add and multiply. We must be united if we want to win.

Point of order made by Berkley supporter as voting starts: it is my understanding that you cannot be District Chair if you are not a member of your local unit. Is Mark Lloyd a member?

Ruled out of order since nominations committee had just approved candidates.

(CAMPBELL Committee slated Lloyd from his unit too)

1:11PM Reports from credentialing: Total 440 delegates are present. Recommended to not seat any delegates from Campbell County.

1:06PM Congressman Hurt has aligned himself with Jon Berkley. 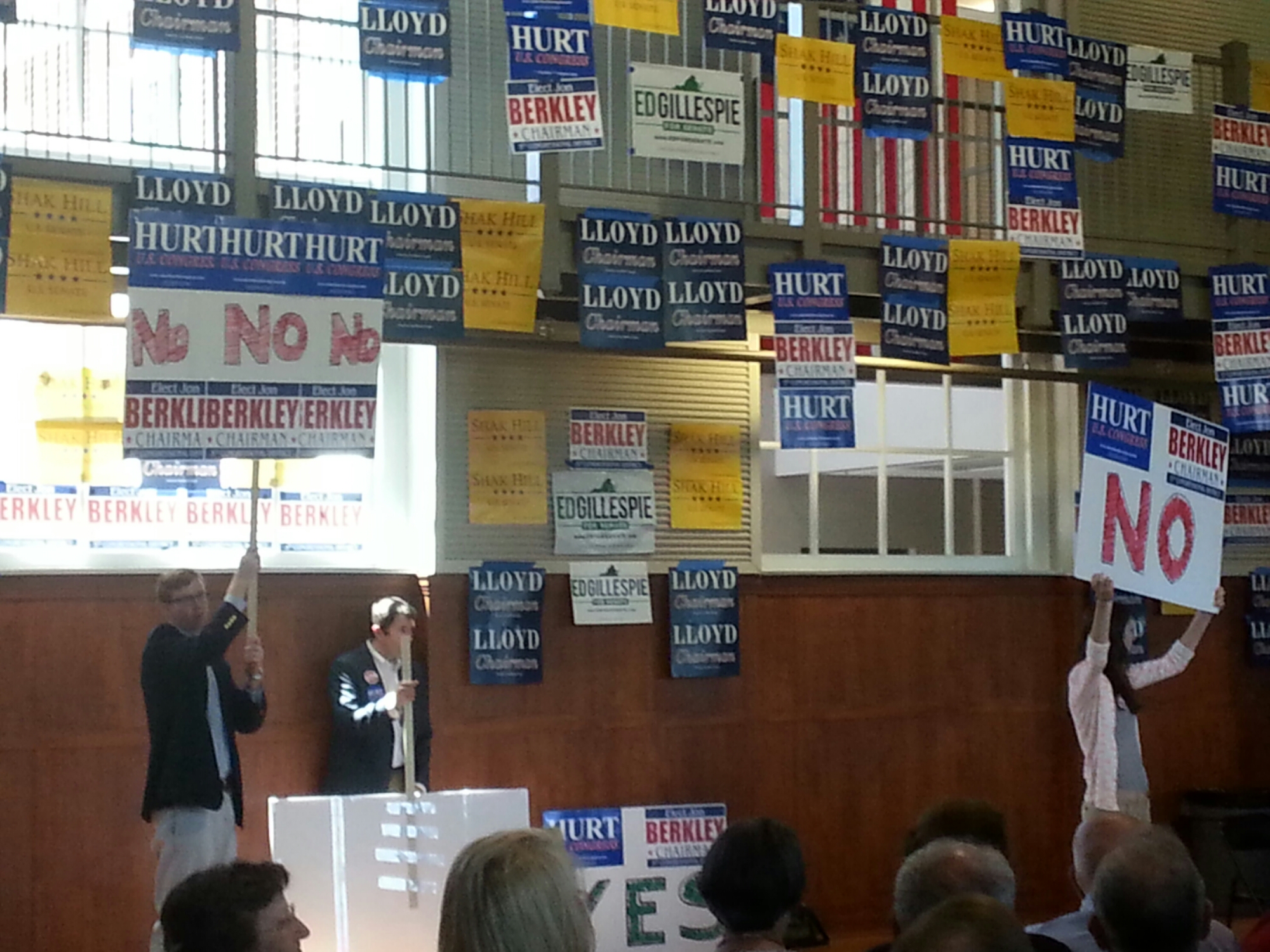 1:00PM Waiting for reports from Rules, Credentials, and Nominations Committee.

12:40PMBerkley approaches me again and threatens me. Tells me, “if you ever decide to run for office again, I can assure you there will be trouble for you.”

12:37PM Rumors are that Berkley people are going to try and get slated Campbell delegates seated.

12:28M Apparently the vote is so extremely close that if Campbell had been seated Sharon Jones would have won. Still awaiting outcome…

12:15PM Jon Berkley approached me and stated that he never had a conversation with Hud Marston to meet at agreed upon time to receive pre-file forms the night of the deadline.

12:11PM Chairman Stanley now declares it will be determined by weighted vote.

12:01AM It looks like Lloyd’s temp chair might have it. Berkley people are now wanting weighted vote count.

11:45AM Nomination of John Marsden for temporary chairman by Berkley’s people and Vance Wilkins by Hurt. Senator Stanley says Vance may not be chairman because he is not a voting member of the 5th. Sharon Jones is now nominated temporary chair by Lloyd’s folks. She is the Secretary of the 5th District committee.

They will do voice vote, then hands and then ballot vote if necessary.

Sidenote: Senator Frank Ruff was going to be the temporary chair for Berkley but backed out last minute.

11:38AM Empty seats of Campbell County. 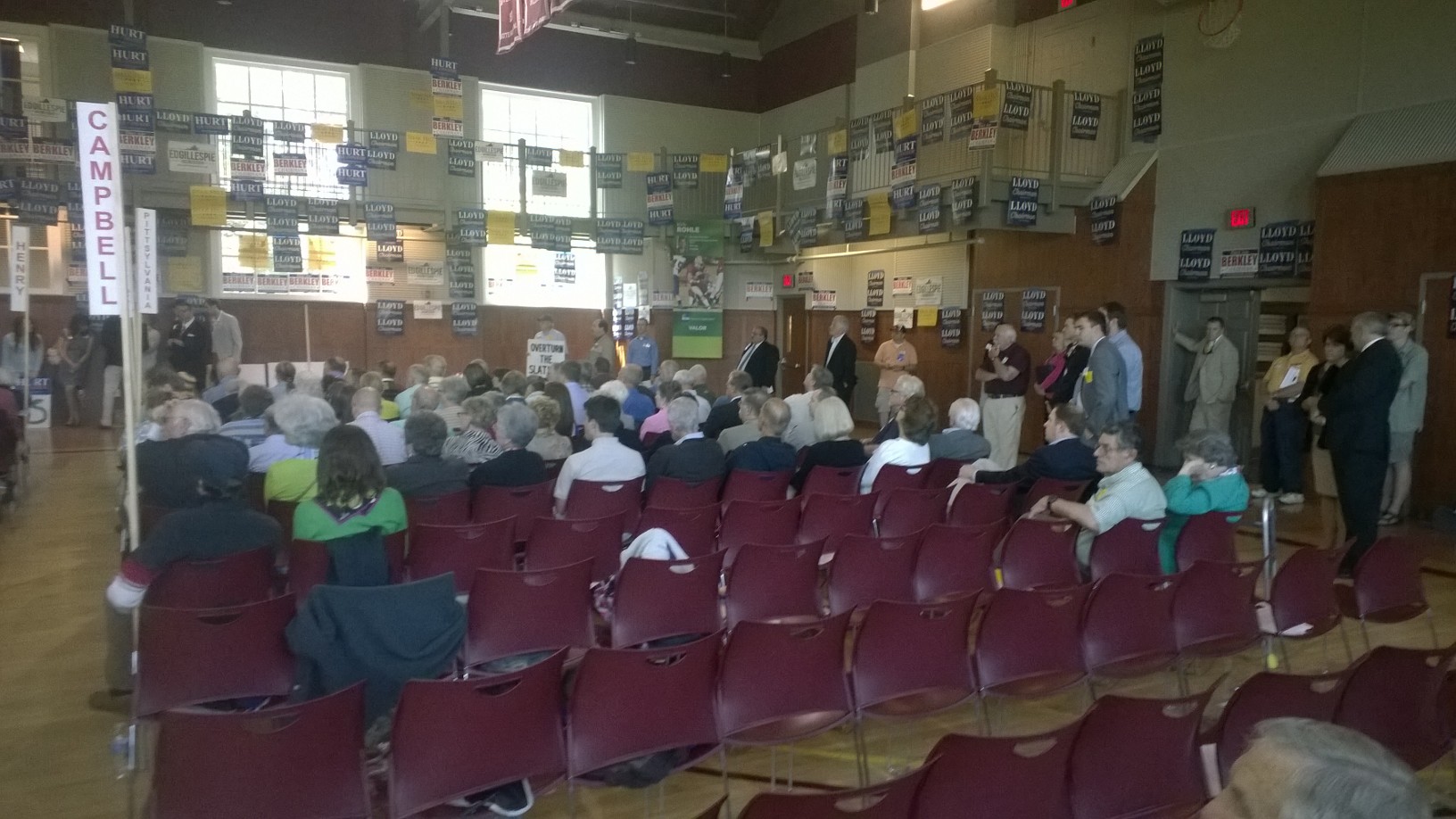 11:34AM Senator Bill Stanley giving his thank you speech and reviewing accomplishments of last couple years.

Talks about Obama and people boo. Senator Stanley says, “by the way, that is the only booing I will allow today.”

Says the infighting, slating and silly shenanigans must stop.

We cannot run the party from the top-down.

Treat each other with kindness and respect. Let’s walk out of here united in purpose.

11:26AMGavel is down. Supporters of Campbell will try to make a motion from the floor to get them seated.

11:06AM It will be very difficult for Mark Lloyd to win without Campbell County, where he was estimated to have a 2-1 advantage. They carry a large portion of the weighted vote. 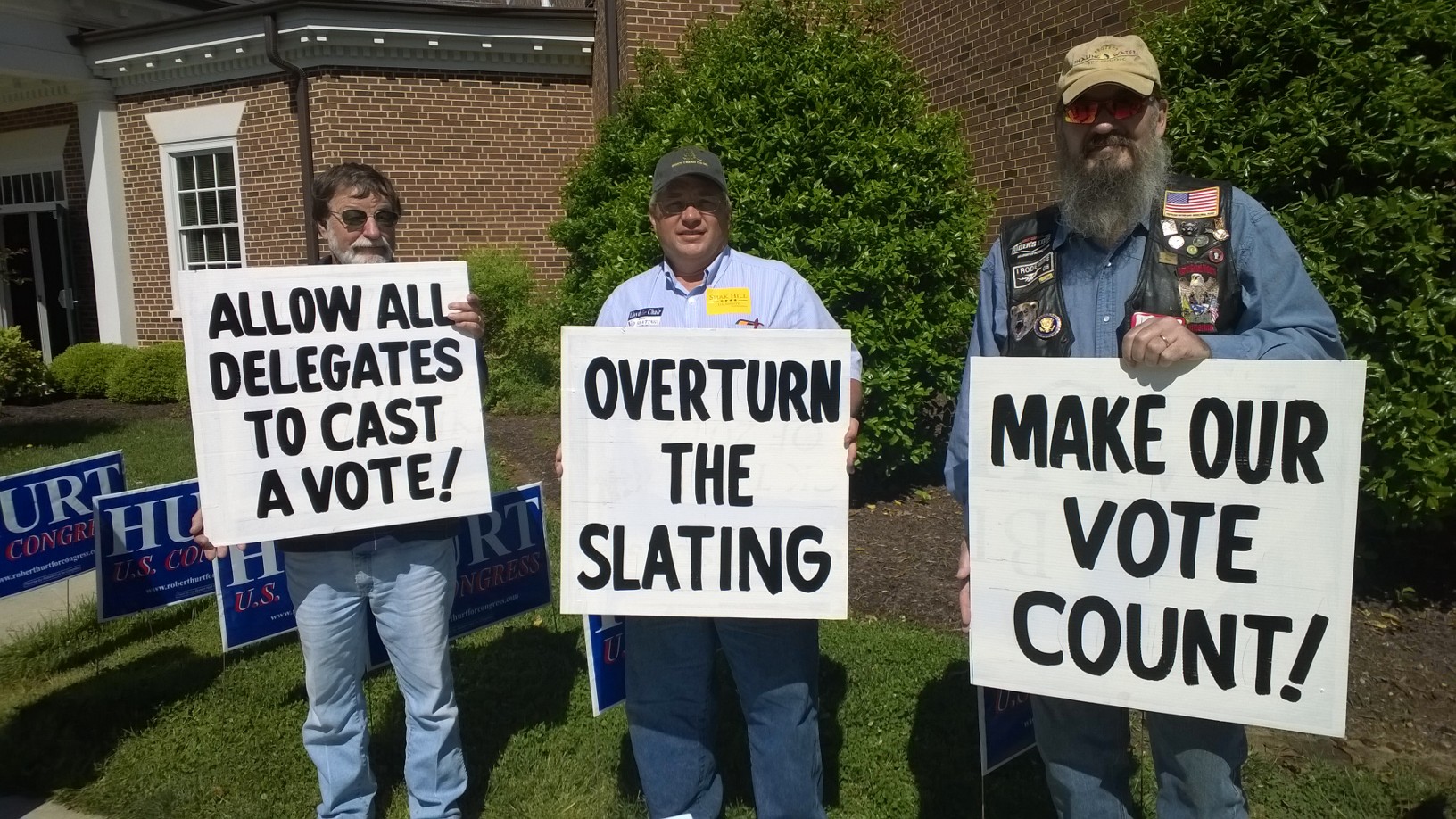 In response to the email below, hopefully you have been checking your email on the ever-evolving issue regarding the seating of delegates at the 5th District Convention tomorrow.  As you may be aware, after the meeting of the 5th District to decide the Campbell County Appeal, I sent to RPV General Counsel  a formal request for a legal opinion regarding the remedy issued by the District Committee, a copy of my formal request is attached. As your chairman, I received a response from Mr. Pat McSweeney, Esquire, General Counsel for RPV, which is also attached (but I believe that you have received this already from RPV).  In accordance with the State Party Plan, this is a binding ruling unless a contrary ruling is made by the RPV Appeals Committee.  An official appeal was filed with RPV of the May 15th General Counsel legal opinion by the Chairman of the Campbell County Committee.  I have now learned that the Chairman of the Republican Party of Virginia, Pat Mullins, will not be calling a meeting of the RPV Appeals Committee prior to our convention.

As stated previously, all current and recognized unit chairman of the 5th District who are present at the 5th District Convention (proxies shall not apply) shall comprise the membership of the Credentials Committee.  I am hereby appointing Mike Hankins, Chair of Lunenburg County, to be the chairman of the credentials committee.  The recording secretary shall be present at the deliberations of this committee to record the proceedings for the compilation of the final report of the committee delivered to the convention body for debate and final consideration.  I am asking all unit chairmen to be present at the convention hall by 8:30 a.m. to begin deliberations. This process may take some time to complete.

I have made previous requests today to the Campbell County Chairman to bring all of these forms to the convention.  I have not received a response.  Therefore, as Chairman, I also order the Chairman of Campbell County to bring all pre-file forms that were collected by and/or submitted to the Campbell unit committee per the terms of the Campbell County Mass Meeting Call (i.e., all forms submitted to the former Chairman), to the convention hall no later than 8:30 a.m. to be turned over to the Credentials Committee for use in its deliberations.  A failure to do so as ordered will be considered adversely by the Chairman and the Credentials Committee.

9:37AM Registration opened at 9:30am. Turnout will tell a lot. Best guesses by individuals are to expect around 400 delegates. Over 700 pre-filed.

05/17/14 – 12:05 AM
Check back here for news as it happens, starting early Saturday. The Bull Elephant’s own Jamie Radtke, with help from guest contributor Susan Stimpson, will be on hand to provide live coverage.