Lots of heads put together around the head table. This is reportedly because Gruber has won, and Cobb people are trying to pick it apart. Rough numbers: 52-48 for Gruber.

IMHO, he shouldn’t get in the mud…makes him look smaller. But kudos to him for engaging in the back and forth. Folks in the crowd yelling out at him. Big boos when he tries to call Brat a liberal.

This speech is going to make the papers.

Voting wrapped up except for Hanover. A quick look at raw votes suggest its close, but leaning Gruber.

Candidate speeches. Jamie Radtke brought down the house speaking for part of Gruber’s time. Speeches will wrap up and voting will start immediately thereafter. Linwood taking issue with assertions that the 7th came up short for the GOP ticket in 2013.

This is amazing…a real close race. Could go either way.

Still voting on Loupassi. Very tedious process of counting delegates row by row. Think there may be emerging consensus to re-vote if it’s close.

Votes on Loupassi still being counted.

05/10/14 – 10:36 AM
Del. Jimmie Massie nominated Del. Loupassi for temporary chairman. Lots of cheering and shouting. Another nomination for Russ Moulton. Cobb ruled motion for Moulton out of order because he is from outside the 7th. Nonsense.

Moulton had Cobb by the jugular, and could have slated him off the Henrico delegation, he didn’t. This is how Cobb repays him.

Mark Obenshain speaking on behalf of Ed Gillespie, who is at the 11th district Convention. He got louder applause, but less sustained than Shak’s.

Gavel down. Security is insane. Finally allowed guests to enter the back of the room.

Sources close to both the Cobb and Gruber campaigns are reporting their whip counts as being very, very close. They won’t really have an idea of which way things are going until registration closes in a few minutes.

We are told that under no circumstances will non-delegates be allowed into the ballroom where the Convention is being held. I asked Linwood Cobb about this, and how this satisfied the open meeting requirement under the state Party rules. He said. “The doors will be open.”

It looks like very heavy turnout. Just about 50/50 in terms of who is wearing Brat and Cantor stickers. So far, many more people wearing Linwood Cobb stickers than Fred Gruber’s.

Here’s a pic of the empty chair debate/rally held by the Brat campaign earlier this morning, featuring Brat’s politically symbiotic partner, Shak Hill. The pic is a close-up, but a wider angle would have showed up to about 100 people. 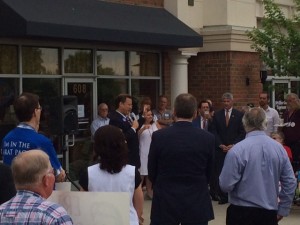 Inside the hotel, the lobby has filled quickly over the last half hour. Rep. Cantor is here, and is working the crowd. He is trailed by his security detail, but also by Henrico Sheriifs. These very surly deputies are visibly and unjustly suppressing speech around the Congressman. Case in point, the delegate pictured below, Paul Shaner from Louisa, was told he could not peacefully hold up his sign. 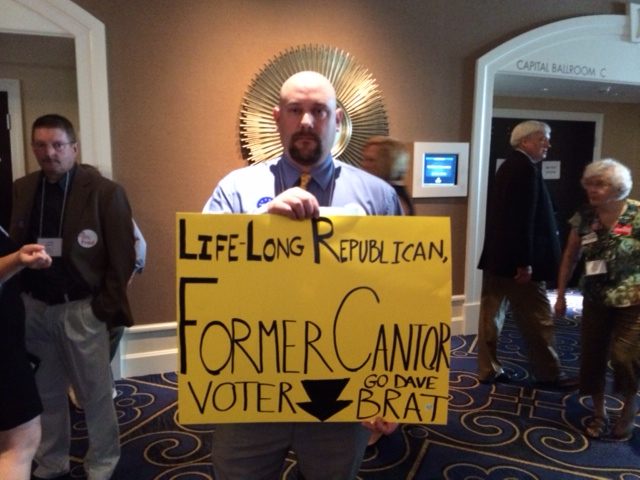 I guess it’s OK to hold it down…just not up. The police warned me not to take a picture. Real nice.

We at The Bull Elephant have been pretty tough in our coverage of Congressman Eric Cantor. For me, that’s mainly been in relation to the slating efforts around the state. For others, it also involves criticism of a lot of the legislation that has crossed his desk. But in fairness, the good stuff that comes out of the House all crosses that same desk. On that score, Rep. Cantor has had a busy week:

Credit where credit is due.

OK. This is funny, in a kind of embarrassing way. Check out the voice actors in this clip of Dave Brat’s latest radio ad: 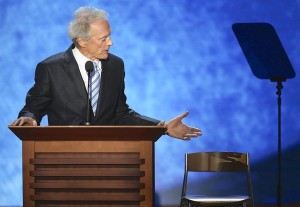 Speaking of the Dave Brat campaign, in their never-ending quest to nail down a debate with the incumbent, they intend to hold an “empty chair” debate with Brat opposing the conspicuously absent Rep. Cantor.  Because all available space has been booked, the campaign made the seemingly unfortunate decision to hold the debate at a nearby Honey Baked Ham shop.

My first thought was, “What?  A debate in the lobby of strip mall shop?”  Not exactly a choice that elevates one’s stature.

Brat critics, on the other hand, were quick to pounce on another aspect: the apparent insensitivity of scheduling a debate in a pork shop against an observant Jewish opponent on the Sabbath.  That does look pretty bad, until you consider that at the very same time Dave Brat will be speaking to his empty chair, Eric Cantor will be speaking to a ballroom full of Cobb delegates munching on bacon and pork sausage.

The contest at the Convention pits incumbent District Chairman and Eric Cantor confidante, Linwood Cobb, against challenger and Tea Party favorite, Fred Gruber. This is the first challenge Cobb has faced in his tenure as Chairman in Eric Cantor’s 7th District. One of the possible reasons no challengers have previously emerged is the very steep barrier to entry erected by Cobb’s Committee: the Committee charged a $5000 filing fee for anyone running for Chairman, which is about 10 times higher than the fees charged in other districts. [UPDATE: The other reason is that Linwood would be very, very difficult to beat, especially with full backing and support of Rep. Cantor. It would be an uphill climb for the best of candidates.]

Originally scheduled to be held in a high school gymnasium, the venue was later moved to the Hilton, both to accommodate the expected crowds and a turnout-generating breakfast with Congressman Cantor. The Bull Elephant has learned that all of the hotel’s meeting rooms have been booked for the event, though only a handful are needed.

Despite the fact that filing fees are usually charged to help defray the costs of the Convention, thus entitling any candidate equal access to and use of the facility, we are told that Cobb’s Committee is not allowing Gruber or his supporters the use of any of the facilities (including the child care room, where delegates with young children may leave them with a baby sitter). Hotel staff have confirmed that the “convention organizer” controls all the meeting rooms, and that the lack of available space is not simply a consequence of the rooms having been rented by third parties. According to a source close to Gruber, Cobb only grudgingly allowed the Gruber campaign to have a single table near the registration area, and only conceded to that yesterday.

Our sense is that Cobb and his Committee are enormously protective of Rep. Cantor, and that this lock-down of Convention facilities has more to do with keeping out any potential shenanigans from the Dave Brat campaign than it does with stifling Gruber, Cobb’s opponent. Still, this seems overboard to us, and unfair to a campaign that coughed up that large of a filing fee.