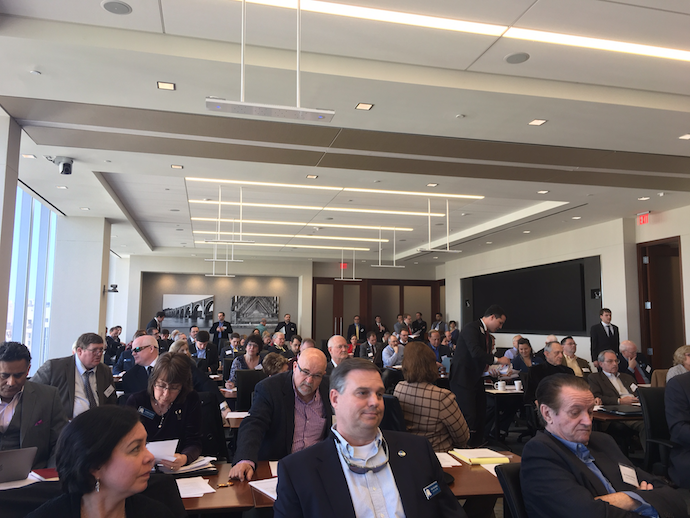 2:40 PM: Unopposed passage of a resolution in support of Donald Trump’s first 100 days. Proceeding to adjournment. Have a good afternoon!

2:27 PM: Meeting winding down with various committee reports and resolutions.

2:22 PM: Mike Thomas voluntarily withdrew his motion before any vote was taken. It will come back up at some point.

2:14 PM: National Committeewoman Cynthia Dunbar makes a powerful statement about maintaining the integrity of our creed, and not adopting excessive regulation and leaving the local units as empowered as they are today. Cynthia offers a compromise resolution that allows SCC to disclaim any litigation initiated by a unit or committee, without requiring affirmative permission (which then almost necessarily attaches liability).

2:07 PM: Silliest argument of the day: my buddy Jeff Ryer says we need to make sure we don’t litigate anything because the courts are dominated by Democrat nominees after the last 8 years.

2:05 PM: Arguments on the resolution are displaying the usual fault lines. Unsurprisingly, folks whose livelihoods are tied to the benefits of incumbency are tending to be the most strident in support. Those friendly to them raise red herrings (scary things like how big a legal bill can be in unrelated instances where the party gets sued). Most are ignoring the legal reality that these units and committees are their own separate legal entities, separately incorporated, with their own standing, their own bank accounts, their own bylaws, and their own officers. It is true that they are all chartered in accordance with the RPV Plan…which is silent on whether a legislative district committee can vindicate its First Amendment rights.

1:40 PM: First Vice Chairman Mike Thomas has introduced a resolution that would require units and committees to come to the State Central Committee for permission to initiate any legal challenges to state or federal laws or regulations. This is aimed at thwarting efforts like the 6th District Committee’s efforts to take down the Incumbent Protection Act. The proposed resolution is below: 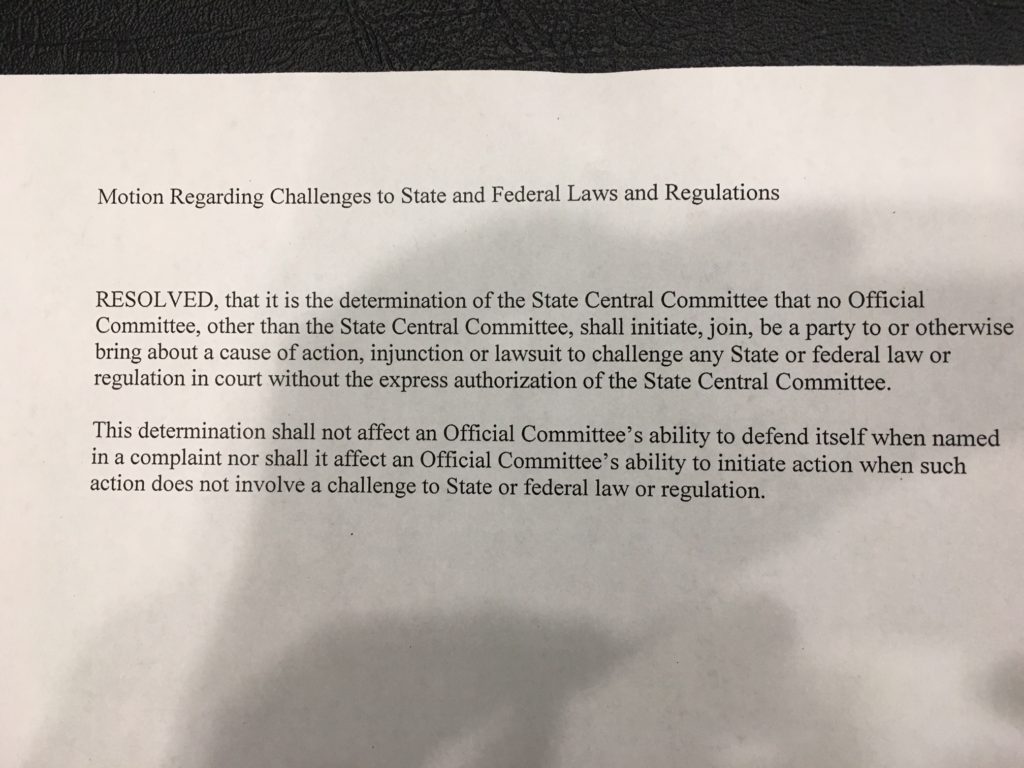 1:28 PM: After much procedural hullaballoo, Sandy has withdrawn her motion, it being understood that we’ll bring it back up next time after an ad hoc committee studies the question and presents further options reflecting input from various stakeholders.

1:13 PM: Sandy made a motion to defer consideration of any Party Plan amendment until next meeting, giving unit chairmen and the grassroots a chance to weigh in.

12:53 PM: Rexrode’s presentation was comprehensive and sound. RGA is in good hands. Back from executive session.

12:24 PM: Recently, the 6th District Republican Committee led by Chairman Scott Sayre voted by a tremendous margin (something like 27-3, I think) to initiate a lawsuit against the State Board of Elections seeking to invalidate the patently unconstitutional Incumbent Protection Act. (For those who aren’t conversant on this issue, this is the law that allows incumbents to choose the method by which their political parties re-nominate them, meaning they can always choose the method that advantages them most to the detriment of their putative opponents, and the people).

The incumbent-friendly crowd on the State Central Committee apparently don’t like this, and are planning to offer a resolution saying that units and committees shouldn’t engage in lawsuits against state or federal law unless they have the State Central Committee’s permission first. This apparently will come up in New Business. Rather than the debate over anti-slating party plan amendments, this issue is likely to be what takes the most time today.

12:11 PM: Came back from lunch and immediately went back into executive session to hear strategy and campaign prep for the 2017 governor’s race. Hearing from Republican Governor’s Association director Dave Rexrode, who is formerly executive director of RPV.

11:47 AM: Went into executive session to discuss finances. Just now came out, and broke for lunch.

11:18 AM: The Chairman had a great entertaining interlude showing the assembled crowd some unhinged Tweets aimed at him by progressives after Whitbeck Tweeted in defense of White House spokesman Sean Spicer. Here’s an example:

11:09 AM: Whitbeck continues the Chairman’s report. Says that the party has now filed the official paperwork for a statewide primary, giving effect to last summer’s razor-thin vote. Reports on Ed Gillespie and Bryce Reeves having already turned in their petition signatures. Talks about the hiring of all-around good guy Jordan Labiosa as RPV’s digital director. The Chairman, on several occasions, refers to how much better funded and organized the party apparatus is than two years ago.

10:58 AM: Chairman Whitbeck giving an overview of a good fundraising picture. Apparently Attorney General candidate Chuck Smith was here earlier, and has now returned to give a talk. Gets a few laughs when he notes wryly that he’s “the ranking African-American” in attendance.

10:48 AM: Applause for Denver Riggleman when he takes the stage. Denver gives a quick version of his stump speech. “I’m angry, and it’s personal,” he said in explaining why he’s running for Governor. “What I started to fear was my government….why am I taxed to the point where I can’t expand my business?” Denver says he feels like he needs to help people who are similarly situated…job creators and free people. “What if you had a government that erred on the side of liberty, rather than on the side of control?” He gets a great reception.

10:40 AM: Chairman John Whitbeck back at the podium and introducing new members who have recently replaced retiring or departing members. New members include staff members for Rep. Bob Goodlatte and Rep. Morgan Griffith. 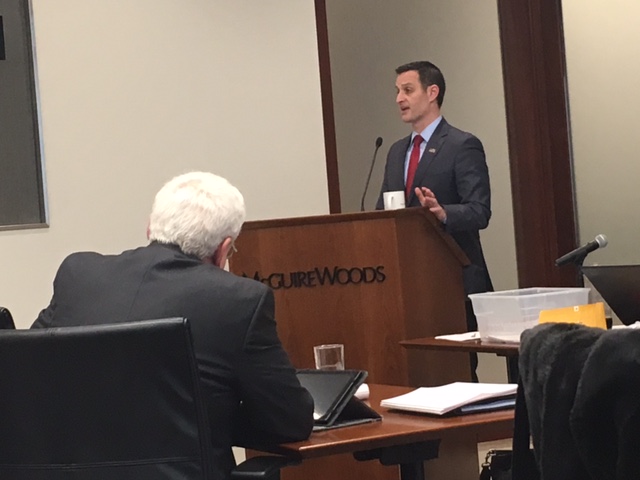 10:30 AM: As we wrote yesterday, the headline subject today is probably the effort to end the national delegate slating that has been the hallmark of Virginia Republican national delegate elections since the early 1970s.

10:15 AM: Garren Shipley, former RPV Communications Director, is now working for RNC, but has been seconded to RPV. Garren is giving a presentation to the group about the expansion and upgrading of RPV’s communications effort. Long story short: in 2017, we’ll the largest and most effective communications operation RPV has ever seen. At the same time, it is likely to be among the most efficient and smartest use of resources we’ve seen in a long time.

10:12 AM: In attendance this morning is gubernatorial candidate Denver Riggleman. Denver is visiting with SCC members, and has Washington Post reporter Laura Vozzella in tow. Stay tuned to the Post for a forthcoming story about Denver’s upstart campaign.

10:09 AM: The gavel has come down on this quarterly meeting of the Republican Party of Virginia’s State Central Committee quarterly meeting. This meeting is being held in the 18th floor conference center of Richmond-based global law firm, McGuire Woods. We’ve got a full house.