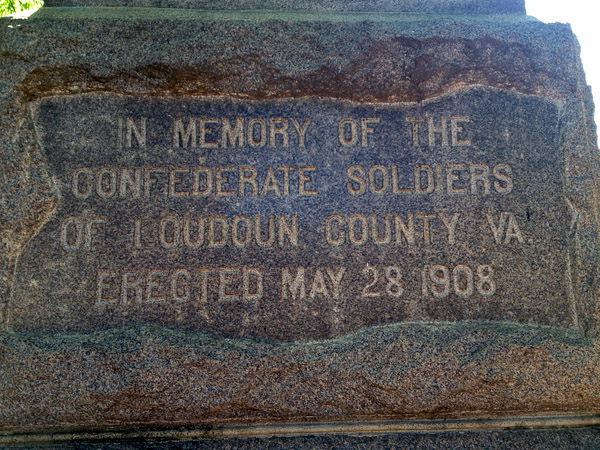 The base of the Confederate soldiers memorial Leesburg (WTOP.com)

Loudoun County Chairman of the Board of Supervisors Democrat Phyllis Randall will ask the General Assembly to allow localities more discretion in the removal of statues.  Currently, Virginia code 15.2-1812 prohibits any removal of any memorial to any war veterans in the Commonwealth. Chairman Randall would like to have the discretion to remove the Confederate soldier statue in front of the Loudoun Courthouse.  (To request this change in the law Chairman Randall will need approval from the full board of Supervisors.)

Well done Phyllis Randall. You just sent the message to every ill informed mush headed group in the country to put Loudoun County on its harass and hit list.

Charlottesville was just inundated with chuckle headed morons of every shape and political bent. Leftists loons galore, racists asshats, anarchists of every persuasion all descended on Charlottesville to beat each other with sticks, assault and kill one another.

So what does our Chairwoman do during these troubling and turbulent times? She sends up a flare to lure the cadre of ding bats that we too would like some turmoil and strife. Hey, what about us? We have people you can beat on and commerce that needs disrupting. What about us? We have plenty of stuff to light on fire. Come to Loudoun our statue is WAY worse than those others.

She is begging for attention by scoring cheap political points. This is really what she is doing. This is a political stunt in which she has put her need to solidify her leftist credentials way out in front of the interest of Loudoun’s citizens.

This is one of the dumbest things ever done by an elected official in Loudoun County.

and so it begins… https://patch.com/virginia/leesburg/confederate-statue-vandalized-outside-loudoun-county-courthouse

Disgusting lowlifes. I hope all of this sticks to the Democrat party like glue.

It’s amazing that anyone would willing to invite trouble for the sake of scoring political points – but we really shouldn’t be surprised at all. Let’s see if she’s willing to take responsibility when the idiots descend on Loudon County.

Now we will have to build a wall around Virginia. Add more wall around each county and city. Pretty soon we will look like a not so merry old England?

Assuming that this proposal garners the type of attention mentioned by Mr. Stone, think about how many state and county law enforcement resources will be involved (and no doubt injured) managing the associated white nationalist and Antifa loons that will descend into LoCo for their next steel-cage death match. This is both sad and infuriating.