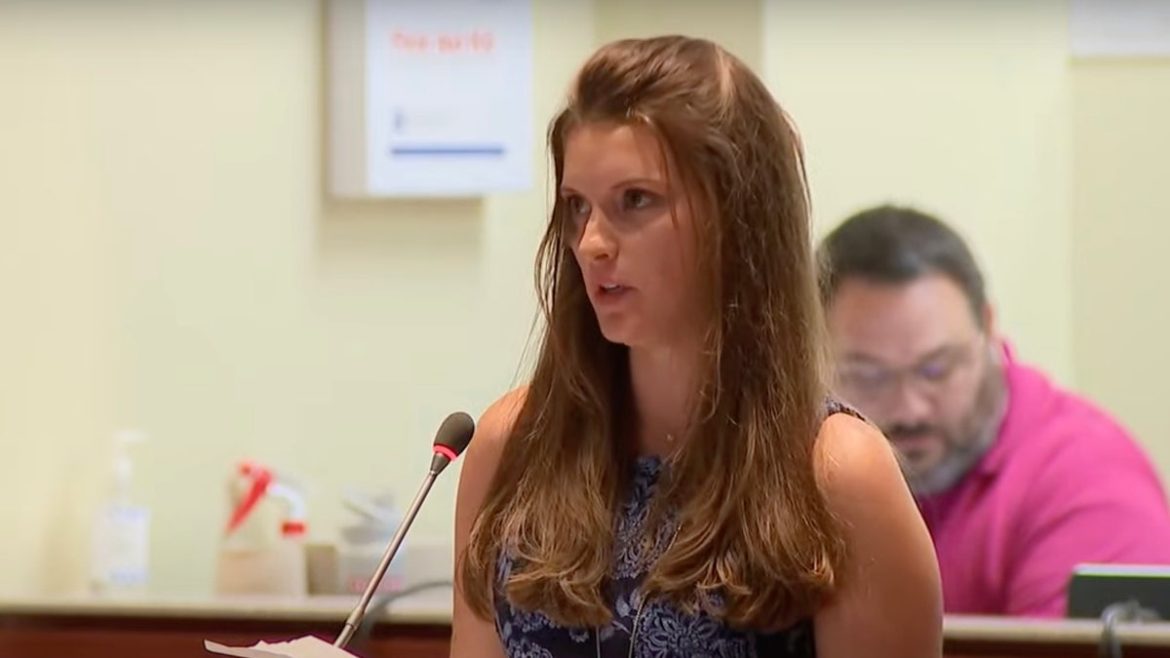 Just when you think the school board in Loudoun can’t possibly become any more arrogant and dismissive, they outdo themselves once again. During their meeting yesterday they barred the public from entering the building for any reason. It is a public building, bought and paid for by the taxpayers of Loudoun County.

The meeting, held to vote on policy 8040 that will allow transgender boys to be in girls’ restrooms and locker rooms and the teaching of Critical Race Theory, went on for well over 4 hours before the board delayed any vote until this evening. The meeting will reconvene today at 5:30.

Meanwhile, the public and those waiting to address the board on these new policies had to stand outside in heat reaching 100 degrees and were banned from entering the building to cool down or even to use the restrooms. When a thunderstorm struck the area they were not permitted to seek shelter in that public building owned by the county. Only the press and 10 people at a time, who had signed up to address the board, were allowed in that public building that our tax dollars pay for.

Ian Prior, the head of “Fight for Schools” was interviewed today on what transpired yesterday in Loudoun at the school board meeting. It can be seen here and it’s well worth watching.

Also, at last night’s meeting a 5th-grade teacher in Loudoun schools, Laura Morris, quit her job because she will not push the schools’ political agenda. She said in part,

“Within the last year, I was told in one of my so-called equity trainings that White, Christian, able-bodied females currently have the power in our schools and ‘this has to change,’” teacher Laura Morris said during the public comment period of the board meeting.

“Clearly, you’ve made your point. You no longer value me or many other teachers you’ve employed in this county. So since my contract outlines the power that you have over my employment in Loudoun County Public Schools, I thought it necessary to resign in front of you.”

“School board, I quit,” she said. Choking up, she added: “I quit your policies, I quit your training, and I quit being a cog in a machine that tells me to push highly politicized agendas to our most vulnerable constituents – children.”

Morris had been told she was not permitted to express dissenting views, in school or out of school. A film of her remarks to the school board can be viewed at the bottom of this Tweet:

Loudoun County Public School Board bars parents and taxpayers from the building and teacher resigns was last modified: August 11th, 2021 by Jeanine Martin

Why don’t you just take the damn comments down? It is nothing but a clown show for leftists like SBN, Eric, hey where’s your buddy WTF , formerly Old Redneck? He seems to be absent from the driveling dofuses you have here.
And Kevin Smith… comments about Hmong gold medalists… could that be either of your favorite old buddies at Bearing Drift?

Awwwww snowflake, you don’t like your ridiculous unsupported assertions challenged so you request censorship? How conservative of you.

I’m a little surprised I made “the list” as I would humbly consider myself way more actual conservative than your version of blowhard “conservatism”. Guess that’s what happens when you bow at the alter of the letter R instead of actual conservative principles.

Well, your comments are not worth reading asswipe. Like the response. Thus they and mine can both be left off and the blog would be better. In a quick review of your crap, I can’t see any value. Are they conservative? What is conservative about you, you little milquetoast, panty boy? Nada. So yes. Remove the comments.

Bwahahahaha, your little pseudo conservative tears. “Take it down bc I don’t like it.” Boo freaking hoo. And I’m the panty boy?

see ya, Morris. We are all better off

One thing is certain, she is better off not having to deal with anti-American socialists and communists like you.

what a silly thing to say

Many folks get into Teaching to make a profound difference in children to help them aspire to great heights.
Democrats always scream about school funding now you see what the real agenda is for Democrats when it comes to schools and it IS NOT education.
Now take notice that it was said that white people are not needed by a State Government entity overseen by Democrat Governor Ralph Northam.
I suggest voting Republican across the board this November.
As fo myself as a parent;
Try and teach my children your opinion on race and gender, my children will pass your political indoctrination classes but the teachers and Administrators will have a Conference with me and my children, at this point they will be put verbally in their place right in front of my children for a life lesson in don’t believe all the horse hockey you hear.

I stand TALL with Ms. Morris
Thank her and watch out for her.

But look what the Loudoun school board did to people like you – they locked the doors. These are the petty tyrants of the left in action. Useful idiots.

There are lots of schools that would love to have a teacher like this. I suspect she has already been contacted by a number of Christian schools in the area. Sadly, the kids she loved so much will no longer benefit from her dedication. Who knows, they might get one of those non-whites the school board wants regardless of competency.

Wow, you really are an idiot, Jeanine.

You never commented on the fact that a Hmong won Olympic gold. How do you feel about that?

Did you know there is a vaccinated only train. You will have to show your papers or get off. But, of course, you approve of tyrannical socialists. Oh, was that Hmong you mention an American citizen? I look at American. You are obviously racist.

Never did that Jeanine Martin Hmong google search then did you, Doc…?? Or are you just cool with what you found…??

The Aussies have a covid Marshall on that train who checks papers. I am sure you favor abusing your fellow subjects for the greater good. Adolph H. Would approve.

And on that train, everyone must wear a mask even though they are all vaccinated. It is such a nice, new looking train in the picture. I can just imagine a New York City subway car in such immaculate condition. Of course, the entry to the subway will still be dirty with lots of interesting smells and bums everywhere, but at least the train will be clean – well, I can dream.

“ Oh, was that Hmong you mention an American citizen?”

You know, if you weren’t so busy trying to be cute and obtuse, you could answer your own vacant questions.

“She was born in the USA, in the state of Minnesota”

American Citizen, deal with it. And mucho congrats to her.

Could go on about how the Hmong fought honorably alongside our troops in Vietnam but I wouldn’t expect you to give a shit about that.

Do you really think I didn’t know the answer? My point- do you see her as an American first or Hmong first. Most of you lefties have such an anti-American tyrannical ideology that you will do everything to distract from her Americanism. That distraction by you is racist.

“Busy trying to be cute and obtuse” was a clue. Your “point”, if there ever is one, misses the mark. Consistency is a virtue though, so kudos.

My point, not cloaked in rhetorical silliness is: American, born in Minnesota. That’s it.

“I was told in one of my so-called equity trainings that White, Christian, able-bodied females currently have the power in our schools and ‘this has to change,’”

That reminds me. If you have this “equity” training, be loud and complain before, during, and after the training. And especially during. There has been an explosion of Diversity, Equity, and Inclusion (DEI) training since Biden’s coup. Object to it at every opportunity you have.

She now has a taste of the evils of socialism in action. Let’s hope she never votes for a democrat again.