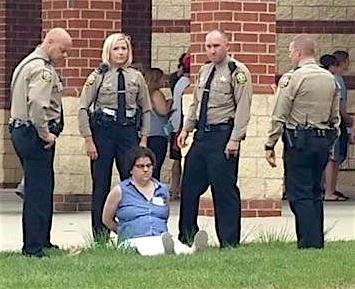 In August we reported on a Loudoun County School Board member behaving very badly. At a rally for Donald Trump in Ashburn democrat School Board member Joy Maloney tried to block the entrance to the rally, took pictures of others in line without their permission, and threw herself on the ground when police were called.  She had her own little protest. She is an elected official who tried to prevent citizens from hearing a Presidential candidate. Loudoun students are much better behaved than their school board representative.

Maloney refused to leave the premises as the deputy sheriffs requested. At that point they had little choice but to arrest her.  She was later released on $1,000 bond.  Her trial is tomorrow, Wednesday the 14th.

On Tuesday night two members of the Loudoun School board, Eric Dekenipp (Catoctin district) and Jill Turgeon (Blue Ridge district), introduced a resolution to censure and condemn the actions of fellow board member Joy Maloney but the school board refused to even consider it.  Six members of the board voted in support of not hearing the censure motion, Maloney abstained and Dekenipp and Turgeon voted against the motion to squash even debating the censure resolution.

School Board member Eric Dekenipp has issued the following statement,

I was very disappointed in the objection and then being ruled out of order in our meeting tonight. From suicide rates increasing by 500%, to overcrowding schools and preparing for budget deliberations and boundaries, Ms. Maloney’s conduct on August 2nd has served as nothing but a distraction for the School Board. Instead of allowing her colleagues on the Board to focus on these other more important issues, we have had to respond to hundreds of complaints about her actions and we have a responsibility to represent these constituents and their concerns. That’s what I was elected to do and that is exactly what my intention was today.

As I reflected on 15th anniversary of 9/11, I was reminded of how our law enforcement officers and other first responders put themselves in harm’s way on a daily basis. I was reminded of how we, as elected officials must set the example and treat law enforcement and our first responders with the utmost respect…the respect that they deserve. That is what this motion was all about.

This motion was not about blocking entrances, politics or bullying. It is about setting the right example for our children and their education and ensuring that they are learning to respect authority.

As I’ve stated to hundreds of concerned constituents over the last 5 weeks, I feel that Joy is a great representative and my first response when I saw what happened at Briar Woods was that she must have had a temporary lapse in judgement.
However, when I followed up with Joy individually I first asked if she was ok. I asked if her arrest would impact her 9-5 career and if it did, offered my services and professional network to assist her in that regard. After talking for a few more minutes about the events and her actions that day, Joy concluded that she doesn’t feel that people should have to follow instructions from law enforcement officers and her actions were intentional.

When I called Joy that day, I hoped to hear a sense of remorse but instead I received confirmation that her actions to disobey LCSO Deputies were deliberate. From an educational standpoint, Ms. Maloney set a poor example for nearly 2,000 constituents, many of which were parents, students and LCPS staff. From a professional conduct standpoint, Ms. Maloney violated several paragraphs within our Code of Conduct and policy 2010 that speaks to our authority, powers and duties as members of the School Board. From a safety standpoint, Ms. Maloney put nearly 3,000 constituent’s safety at risk. Thank god, there wasn’t a serious incident at the school that day because Ms. Maloney could have very well put lives at risk because the Deputies working that assignment were dealing with her non-sense.

It’s been said, that not all behavior that is unethical is illegal and I am not here to serve and as a judge but I was here to stand up and recommend that we as a board unite around this resolution and the ethical principal that law enforcement should be treated with respect and that Ms. Maloney’s actions did not represent the views of the LCSB.

Don’t we expect more from our colleagues on the board? Don’t we expect more from our elected officials? Don’t we expect our students to respect authority? Of course the answers to these questions are YES. Why then, couldn’t Ms. Maloney peacefully protest with the other 80+ protesters in front of school, none of them had any problems? Why did Ms. Maloney willfully refuse to follow the Deputies orders, none of the other protesters who protested legally had any problems? The public deserves to know the answers to these questions and they deserve to know that we as a board do value and respect the authority granted to our law enforcement officers and this resolution would have clearly and concisely sent that message.