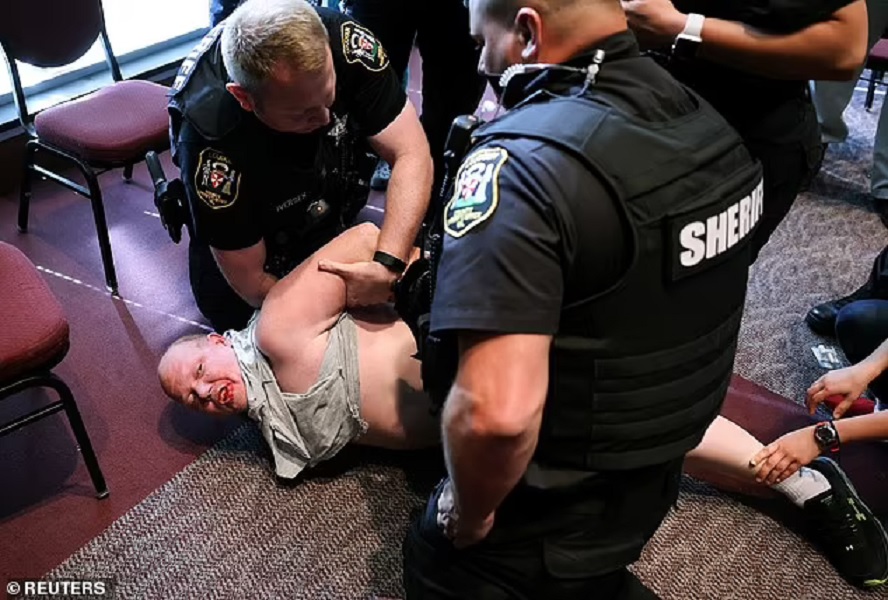 Scott Smith being arrested and dragged out of Loudoun County School Board meeting (source: Reuters)

“The Daily Wire has published an intense investigative piece that exposes a deep rot in Virginia’s public school system — one that should force parents all over the country to question whether public school officials, both elected and unelected, care about their students at all,” notes the Washington Examiner.

It chronicles the arrest of a Virginia father who tried to protest transgender bathroom policies the Loudoun County School Board was planning to adopt at a June 22 meeting. Scott Smith was waiting to tell the school board that his daughter, a ninth-grader, had been raped in a girl’s bathroom by a boy wearing a skirt. A woman at the meeting, a progressive community activist, told Smith she didn’t believe his daughter. An angry Smith responded, a police officer stepped in and grabbed his arm, “Smith yanked it away, and then he was arrested.”

“More alarming than Smith’s arrest and subsequent prosecution, however, were the county’s attempts to hide what had happened to his daughter,” says the Examiner. “At that same school board meeting, the county’s superintendent claimed concerns about transgender policies were unreasonable because the school system had no record of a sexual assault ever taking place in a school bathroom.”

School officials also “tried to avoid getting law enforcement involved…they transferred the assailant to a different school, where he went on to sexually assault another student just a few months later.”

Two girls, allegedly sexually assaulted in school, four months apart, by the same person. And so far, the only person to be convicted of a crime is the victim’s father.

A school policy passed following what appear to be false statements from the superintendent — a policy whose passage would have been politically impossible had Smith’s story seen the light of day.

As the Examiner observes, “This is truly outrageous. Loudoun County failed Smith, his daughter, and every single other parent who sends their children to its schools. School officials covered up what happened to Smith’s daughter so they could force through an unpopular and dangerous policy in the name of inclusion. When Smith tried to protest, they arrested him.”

As Rosiak points out, the local progressive prosecutor, known for usually being soft on criminals, went out of her way to seek jail time against Smith for daring to speak out about the rape of his daughter.

“How could Loudoun County parents possibly justify sending their children back to such schools as the ones these people run?,” asks the Examiner.

As Rosiak observes, “The National School Board Association included Scott Smith in its list used to deem parents ‘domestic terrorists,'” which it sent to the Attorney General. “Scott Smith became the poster parent for the National School Board Association after his arrest went viral.” In response, Attorney General Merrick Garland announced that the Justice Department will investigate “harassment, intimidation, and threats” against school officials.

The National School Boards Association asked for Justice Department intervention in response to what it called “threats and acts of violence,” in controversies about “critical race theory” and “masking requirements.”

But few of the acts it complained about actually were violent. As the Washington Examiner notes, key “examples” cited by the NSBA included “a man filming himself while calling school administrators and another man labeling a school board as ‘Marxist.’” The NSBA’s letter listed as an example of threatening or violent behavior the fact that “A resident in Alabama … has called school administrators while filming himself on Facebook Live.”

The NSBA complained about “cyberbullying,” but angry emails to public officials — such as about critical race theory or mask rules — are speech protected by the First Amendment, even when school board members get thousands of such emails, or get attacked on social media for their policies.

The NSBA letter falsely claimed that “critical race theory is not taught in public schools and remains a complex law school and graduate school subject well beyond the scope of a K–12 class.” In reality, 20% of urban school teachers have taught or discussed critical race theory with their K-12 students, along with 8% of teachers nationally, according to a survey by Education Week. These percentages are even higher in high schools, where books by critical race theorists are much more likely to be assigned to students than in elementary schools. The Loudoun County, Virginia public schools paid a contractor to train their staff in critical race theory, giving it $3,125 to conduct “Critical Race Theory Development.”

[…] Chief Judge at Virginia Juvenile and Domestic Relations District Court, Pamela Brooks, ruled today that a 14 year old boy, dressed as a girl, was guilty of sexually assaulting a girl in the bathroom at Stone Bridge high school. We previously reported on the assault and what followed here. […]

[…] has made it his top priority. Last night he announced he would launch an investigation into Loudoun Public Schools coverup of rape and sexual assaults by the same student in the bathroom at two different high schools. LCPS is not keeping our kids […]

During Mcauliffe first term as VA Governor, his Department of Education was pushing CRT for K-12. There is an existing power point presentation done at the time that show CRT being promoted.

[…] Legislative Flim-Flam On the Warren County Ballot – Who a… The Spartacus Letter (Part 3) Loudoun County schools covered up rape, and victim’s… America First vs. America […]

The family of the raped and sodomized girl has filed a lawsuit against the Loudoun School Board and System. I hope that they win and that the socialists on the school board live in the filth and with the misery they have created. Let them be shunned and condemned every day of their lives.

I hope the family wins millions of dollars. It it too much to hope that the average idiot voter in Lowdown County won’t re elect those scum? Probably so… it is a county of fools….sort of… they know the Demorats are their meal ticket to hundreds of millions of government contracts. But you would think they would cool it on the stupidity in this school system… The stupid bathrooms crap and CRT… but these are true believer liberals in this county.. who don’t have to face the consequences of NO Prosecute DAs like they have and school boards pushing crap… like use the bathroom you identify with… ugh… oh there’s not just two sexes..
Maybe they will cause Terry McRat not to win… a long shot but they have helped.

How do these victims of this sexual predator get their childhood back? The trolls are silent when it comes to victims as are most Democrats.

A vote for Democrats is a vote for evil. Don’t ever forget that.

And let’s not forget that RINOs are democrats.

I don’t believe this for a minute

The police have the facts so your belief is like a fantasy, a very evil fantasy.

yeah? I bet it turns out that this dad is full of shit

The sexual predator has been arrested and imprisoned. There is more than one girl who has been victimized.

Johnny Useful Idiot Martin.. The article above has the facts as does the article Jeanine Martin links. You need to come up with facts that counter those two sources before you make such a statement. Go ahead do so… show how the father is lying. You won’t find the story in your Washington Bird Cage Liner because they wont cover this sort of thing… screws with their narrative… Unless of course they can ;rove this wrong… but not likely. It seems the little deviant who assaulted this guy’s daughter was arrested.

Let’s Go Brandon… And this goes for his followers like you….

You don’t want to believe it because it shows the level of depravity your Democrats have sunk to. However, it is true.

In th bad old days, this mentally ill sexual predator would have been institutionalized by his parents. Now these parents dump their problems into the schools. Eventually, this mentally I’ll sexual predator will again be dumped on the community and the future involves more predation and the potential that this “boy/girl” will become a killer of women. The left owns the predator class.

More on the story from a UK newspaper, https://www.dailymail.co.uk/news/article-10083783/Loudoun-County-father-arrested-school-meeting-says-daughter-raped-boy-girls-bathroom.html?ito=amp_twitter_share-top
This is appalling. SHAME ON LCPS!

A question Jeanine… Why isn’t this story in the Washington Post? I guess they are too busy gushing over Jeffy Bezos’ rocket!!! Hoorah for our Slave Owner reports the drones that write Jeffy’s Newsletter.

What is fascinating is that the UK paper provides a very detailed accounting of the sexual predation while the US news is really quite minimal at best. Transgender mental cases have to be protected. Real girls and women not so much – they are pawns.

The future of the rest of the citizens of the former USA now USSA, sit down shutup and take it or go to jail! It’s Ghandi time!

No, it is Jefferson time.