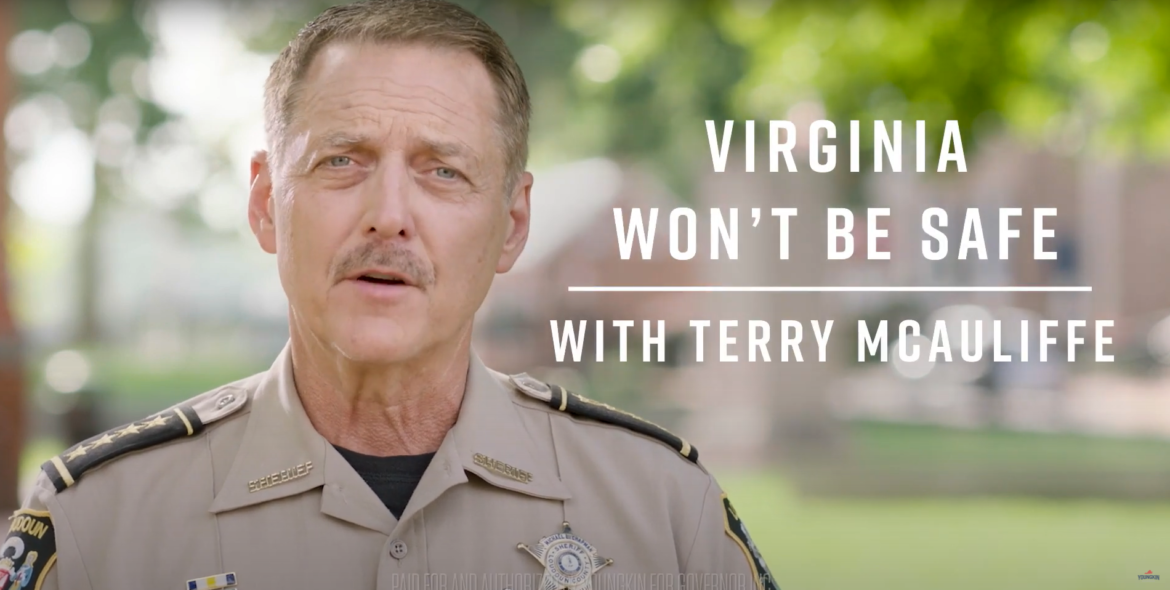 “It’s been a tough year, but it helps when elected officials have our back,” Chapman said. “Terry McAuliffe doesn’t.”

“As governor, McAuliffe’s handpicked parole board had one mission, ‘cut them loose,’ releasing violent criminals early, including a cop killer, and even making it easier for felons to get a gun,” Chapman said. I’m Mike Chapman, sheriff of Loudon County. The fact is, Virginia won’t be safe with four more years of Terry’s McAuliffe’s policies.”

An ad worth watching:

If you research Youngkin’s history with the Carlyle Group you will know there is not measurable differences between the two except one is an (R) and the other a (D). Why? both are Globalists and in Youngkin’s case he has made a career as co-CEO pursuing the economic development of China over the US. The Carlyle Group founder has a podcast still indicating that China is where American investment needs to be while J. P. Morgan did a recent interview saying, “So the US is second economically. . . it will be better for everyone.” So goes Wall Street Investor Companies. This is how Glenn was mentored since 27 before being pushed out by Lee, current CEO of the Carlyle Group. Hillary Clinton was paid quite good money-few hundred thousands plus–to speak when Glenn was CEO. Glenn’s connections to China was the route by which Trump got his China deal as he went looking for “consultants with the Middle Resolution Group” to run for public office himself. He got something in return being inexperienced in politics. Glenn gave monies to Romney and other never-Trumpers and walked the campaigns trail I am told with Greenshaw, who is going around the country saying, “Stay away from Trump.” OK, seeing the ties here, tell me this man, who really has yet to speak strongly on many conservative issues with 12 days to the start of early voting, will definitely perform conservatively. He is a businessman, yes, but he is NO TRUMP!

The liberal communists adore crime. They use crime as a way to control the sheep. Biden has paid Antifa to commit crimes to support his defund the police efforts. The goal is to remove the police altogether. They hate this country and the ability of the police to kill people and should be destroyed.

FYI… Virginia experienced a 1.9 percent decrease in violent crime offenses in 2020 compared to 2019.… the most recent data available….

You know why this commercial won’t work? Look at the average liberal or soccer Mommy in this stupid state. They have BLM signs on their yards and Hate Has No Home Here ditto…. they watch MSNBC and read the NYTs and WAPO…

Oh and they live in their gated communities… maybe not gated with guards officially but price gated. So they are insulated from their own stupidity.

So given all that, they don’t even know about crime. Wapo certainly doesn’t cover it anymore. That would ahem…. be racist….

These idiots don’t even know the world they unleashed with BLM riots which were coordinated by Soros and his minions to win the election… worked! As well as stuffing ballot boxes, but that is another story..

I would highly recommend, John and company that you don’t go wandering around in bad neighborhoods in Virginia. You stay safe and vote for Terry Mac!

“You stay safe and vote for Terry Mac!” Thanks! You do the same!!!

yeah sure. Youngkin is clueless and destroyed a lot of lives for money

Well Johnny… so what. It’s not like the Campaign finance chair for the Clintons, Bubba especially is going to be let straight into Heaven on the first ballot. No… association with that corrupt family however will get you a great job in perdition. Did Terry Mac ride on the Lolita Express with his boss, Big Bubba? Lets hope not…
I think Terry Mac would be great as a governor of… New York. Job is open. He’s the main for that cesspool.
John… move and be with him! You can write about how great things are. We’ll miss you but New York’s gain, is our gain.

Defund the police. Eliminate bail. Parole Parole Parole. Give the Felons their voting rights. Pay felons not to use guns… San Fran is experimenting with that one… Make shoplifting under 950 dollars a misdemeanor. Eliminate the death penalty… and don’t forget as above… parole parole parole… Open the prisons! Oh right COVID!!! got to let them out!!!

We’re gonna need more doughnut shops because if a person with half a brain is a cop these days… I wouldn’t try too hard. If you have to respond to a shooting… take your time. Wait for the gunfire to end. Then call the coroner or ambulance. And for God sake if there is a quarrel involving a precious black life… let it resolve itself or you’ll be up on administrative charges if you intervene!!

Oops… I forgot… You have to decriminalize ALL Drugs… Crack, Meth, Fentanyl… Don’t forget that!! *

*Um…. this one might actually be a solution to the crime… I wonder what unfettered access to fentanyl would do for crminal stats… stuff is pretty deadly…. hmmm… maybe the progressives are on to something here.