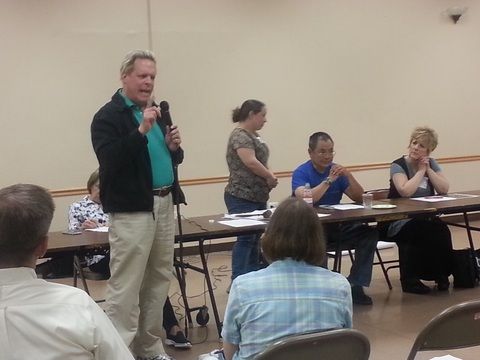 On Thursday night the democratic nominee for sheriff, Brian Allman, was asked to leave the Loudoun County Democratic Committee meeting after his membership was challenged. Following the challenge he threatened a member of the committee and was then asked to leave. [read_more]

“Brian, you’re not a member, please leave the building.”

There was no decision made at the meeting regarding Allman’s membership in the committee or his nomination for sheriff, although his name no longer appears on the LCDC committee webpage as their candidate for sheriff. (His name was on page last week.)

Brian Allman is well known for filing lawsuits, having filed 25 lawsuits since 1989 and in one case referring to the defense attorney in a term used for female anatomy 25 times. (Can we say Nutjob?) Following the LCDC meeting Allman sent an email to their chairwoman indicating legal action. No surprise.

Read more on the story, with audio from the meeting, here.

[…] The outpouring of support for a run has been huge from sheriff’s employees, as well as activists in both the Republican and Democratic parties.  More Democrats are asking me to run after the recent self destruction of the Democratic candidate.  […]

The Dems don’t have open meetings where non-members can attend?

“All meetings of the county or city committee shall be open to the public”. – Democratic Party of Virginia Party Plan September 28, 2013 Section 8.11 “Meetings”.

It begs the question: Since Brian Allman has been representing himself as a Democrat candidate or potential candidate all year, why hasn’t he applied for LCDC membership some time ago?