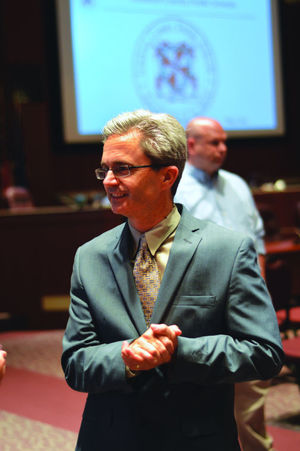 The new LCPS Superintendent, Eric Williams, has asked for a budget that will bring the school’s budget to just under a BILLION dollars, $981 million for fiscal year 2016, an increase of $68.9 million over this year. This budget includes the expansion of all day kindergarten to 1,600 students, largely low income students, ESL students, and those students with special needs. [read_more]

The budget would eliminate middle school assistant librarians and bring back the nine middle school deans. (I don’t see the need for either. Why do we have libraries in middle schools and high schools?  Students rarely get to use them and every community has a library.)

Part of the 7.6 percent budget increase comes from a projected 3.4 percent increase in student population. Next year LCPS expects to have 76,000 students.  School based staff (which does not mean only teachers) will increase by 231.

The Superintendent also proposed a cost savings by eliminating 40 positions, mostly bus drivers.  This move is guaranteed to upset parents, particularly in western Loudoun where it’s not unusual for students to be on bus rides of an hour or more.

The budget also includes a pay raise for all LCPS employees.

Concerning busses: I have personally witnessed busses pulling into Woodgrove HS many times with 5 or 6 kids on them. Perhaps this is part of the reason for cutting back.

Jeanine, what is the education cost per student? Is it inline with other counties? Thanks

Yes, they are all over priced. It’s the same bloated government model across the country. Of course DC pays way more, $18,000 per pupil while Loudoun pays about $11,000. Do the math, if Loudoun has as many teachers as they claim, the average class size would be under 11. Has anyone in Loudoun EVER seen a class that size? Some of those they claim are teachers obviously are not.

I agree. I have complained for many years to my Delegate about being held hostage by the high price of education.

I gave up. I now mostly just attempt to point out what I see regarding bigger government financed by bigger spending.

Oh, and isn’t it funny how just about everyone likes to point to $11,000 as the magic number?

Except DC that is.

Libraries are extremely important!
The author must not spend much time in the school libraries. Libraries support the curriculum and reading for ALL students. They are the HUB of our schools. No, I am not a library staff person, nor have I ever been one. However, I am a parent and grandparent as well as a 33 year veteran of teaching. I see first hand how libraries provide books that inspire and lessons that teach. It is frustrating when people not directly involved in educating our children, make these comments.

I’m confused by the comment that the budget includes a pay raise for all FCPS employees. Did you switch topics to discuss FCPS or did you mean to write LCPS.

Thanks for catching that mistake. Please tell us when middle school students can use the library. I’ve had experience in three middle schools and two high schools. I’ve never seen more than 2 or 3 students in the library, in schools with populations over 2,000. I don’t recall my sons ever visiting school libraries at Madison or TJHSST but the used the local libraries after school and on weekends. Why should the county duplicate libraries?

Get rid of libraries? That is probably the only place most children ever actually open a real book. We are dumbing America down.

Unfortunately, there is no time during the day when the students can use the library and they must board buses at the end of the day. Middle school students go the library with their class a few times a year, and often not that frequently. Perhaps the teachers use the libraries?

For those interested in the facts, only 21.9% of Loudoun’s population is over 5 and under 18. With home school and private school that means 80% of the county is paying to support schools they don’t use. Perhaps that is why these constant increases in the schools’ budgets are hard to take. http://quickfacts.census.gov/qfd/states/51/51107.html

Unfortunately, it is sad for people to take such a SELF-CENTERED approach to public education. Education is the key to our democracy and not all children have parents that can afford private education nor parents that can stay home to home school. It also must be noted that when most of that 80% were either themselves attending public school or their children were attending, many taxpayers without children in school were supporting education for their children.

Education is the thing that keeps a great country great. People who want to encourage a private education system that excludes many are encouraging America to become a class system.

Yes, that’s exactly why we need school choice. Give every parent a voucher for half what the public schools are spending per pupil and watch all schools improve. Competition makes things better. There is no bigger child advocate than I, that’s why I want every child to have the best education appropriate for them. Parents are the best judge of that, not the government.

Sadly, vouchers ONLY help those families with an income that can pay the difference between the tuition and the voucher and those that can either be available to transport their children to and from the school or pay for the extra, often expensive bus fees. Very few voucher systems help the poor family.

And the rest get stuck in inferior government schools? That’s not what happened in Cleveland and Milwaukee. ALL schools improved and something like 90% of the kids could afford any school they chose. Poor kids are off subsidized at private schools.

Google it. When did competition not make things better? When did the government do something better than the private sector?

I did and I couldn’t find anything.

Nothing at all that says schools are improving. On the contrary, Ohio was ranked #5 in the Nation 5 years ago and is now #18. How is that an improvement?

And a Milwaukee story-notice how much the owners paid themselves. http://www.jsonline.com/news/education/milwaukee-voucher-school-closes-after-dpi-bars-it-from-program-b99416973z1-287051201.html

The fact that you want to get rid of school libraries is absolutely appalling. School libraries and librarians are very important for student achievement in all subject areas. We deparately need our students to become effective connoisseurs of all the information thrown at them, and it is the school librarians who teach them to do this. Perhaps before you make anymore statements like this, you do some research of your own.

What makes you think I haven’t done the research?

Your comments about libraries not being used make it obvious. I have spent much time, including recently, in middle school libraries and they are used on a regular basis. What is your background with school libraries?

Just which class can kids skip to go the library?

So, you are NOT familiar with libraries in our schools. Students do NOT skip classes. They use the libraries during their Resource classes to research for class projects, to check out books needed to complete a myriad of assignments. In middle school they routinely go with their Language Arts classes for special instruction on use of reference materials, how to access county wide materials and many other lessons. Librarians also pull together carts of books and reference materials to support classroom lessons in specific subject matter. They are an integral resource..not to mention the connections librarians make with students often spurring them on to writing careers and a lifelong love of reading.

I don’t support getting rid of libraries, they are beehives of activity in the MSs and HSs. Kids do use them during Resource, the Librarians are part teacher/group project leader/classroom support – getting rid of this staff is a bad idea. With the block schedule kids utilize the libraries all the time for make up work and test prep. The library staff is excellent, and they do far more educational work than MS Deans. Basically the Superintendent is trying to replace staff that actually educates (Library assts) and reinstate administrators (Deans), which quite frankly are just crowd control/parent complaint managers.

Why do you hate public education?

Yup. That’s it, you nailed it. Aren’t you smart?

Of course I don’t hate our public schools but I do hate the bloated bureaucracy and I feel sorry for people who can no longer afford to live in Loudoun because of the high taxes.

Lovettsville “Educator”: Public education ain’t what it used to be. But just from reading the article and my own experience with four kids, two of whom attended public schools in Fairfax County in the 1990s, I know that a good portion of this education budget increase arises from an unprecedented amount of immigration – much of it illegal, and much of it from the third world. And all of this attempt to make us into a rainbow nation cuesta nos mucho, mucho dinero. And quite frankly, some of us taxpayers are getting sick of having to bank roll it.

And even with the best thing that the federal government does – provide for the common defense – there are rampant cost overruns, bloated budgets, cronyism, and incompetence. And I know! I am a retired Army intelligence officer with an additional 20 years as a contractor working in all sorts of endeavors. Just in the area of Models and Simulations (which I worked for five years – with JWARS and JSIMS), I saw well over ONE BILLION dollars wasted, because the government reps had no friggin’ idea what they were doing. No, my philosophy is “private is generally better than gubmint.” And that goes double for education.

Ugh…I find your deplorable. You have no idea what goes on in schools…whatsoever. Spend some time there (not when your kids were in school…SO long ago). I see you post on RHOLC too. You are ridiculous and totally wrong.

First, ‘you are’ is contracted to you’re, not your. As a teacher you should know better. You might want to expand your argument a bit more if you are to be persuasive.

The elimination of bus drivers is part of a broader scheme for the LCPS to try to shift those costs to parents as user fees. The idea is that if enough people get upset they will push their elected officials to spend more taxpayer money rather than pay fees directly.