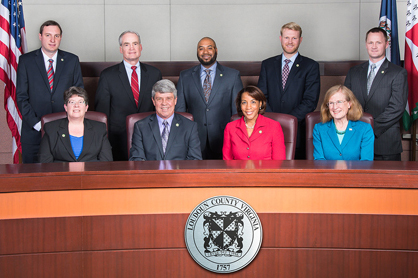 Loudoun County Board of Supervisors

Loudoun Supervisors kick the can down the road on gun issue

In a meeting that lasted until 1:20 am, the Loudoun Board of Supervisors decided to have more ‘study’ done on more gun regulation in Loudoun.  The proposal was lead by two (former?) Republicans on the board, Matt Letourneau and Ron Meyer.  From Loudounnow.com,

After a long debate Tuesday, the board’s Transportation and Land Use Committee will hear reports in February on: expanding the area of the county where shooting is prohibited, currently most of the suburban policy area to the east, to include the entire suburban policy area, which is largely covered by other shooting restrictions already; increasing the prohibited distance for firing guns from 50 yards to 100 yards from primary and secondary roads, which would match all other Virginia jurisdictions in the region; and study the possibility of requiring berms or shooting downhill for target shooting.

The county will also ask the state to consider a new law between the class one misdemeanor of reckless discharge of a firearm, which Supervisor Matthew F. Letourneau (R-Dulles) described as “a slap on the wrist,” and the class one felony of maliciously firing at an occupied building, which Supervisor Ron A. Meyer Jr. (R-Broad Run) said presents a heavy burden of proof to prosecutors.

On Facebook Greg Stone made an excellent summation of the Loudoun Board of Supervisors,

After watching the Board of Supervisors debate how many angels could dance on the head of a pin, I came to the conclusion that we have 3 distinct groups on this current board.

Kudos to Higgins and Buona for acting like rational Conservatives

Those Afraid of Soccer Moms:
Ron Meyer and Matt Letourneau.

More on the longest meeting in the history of this board here.

Aren’t you glad you weren’t there?

Loudoun Supervisors kick the can down the road on gun issue was last modified: December 5th, 2018 by Jeanine Martin

[…] meeting.  Unfortunately I had to leave early (before my slot to speak arrived).  Evidently the meeting went until well after 1am… reportedly the longest Supervisors’ deliberation in the […]