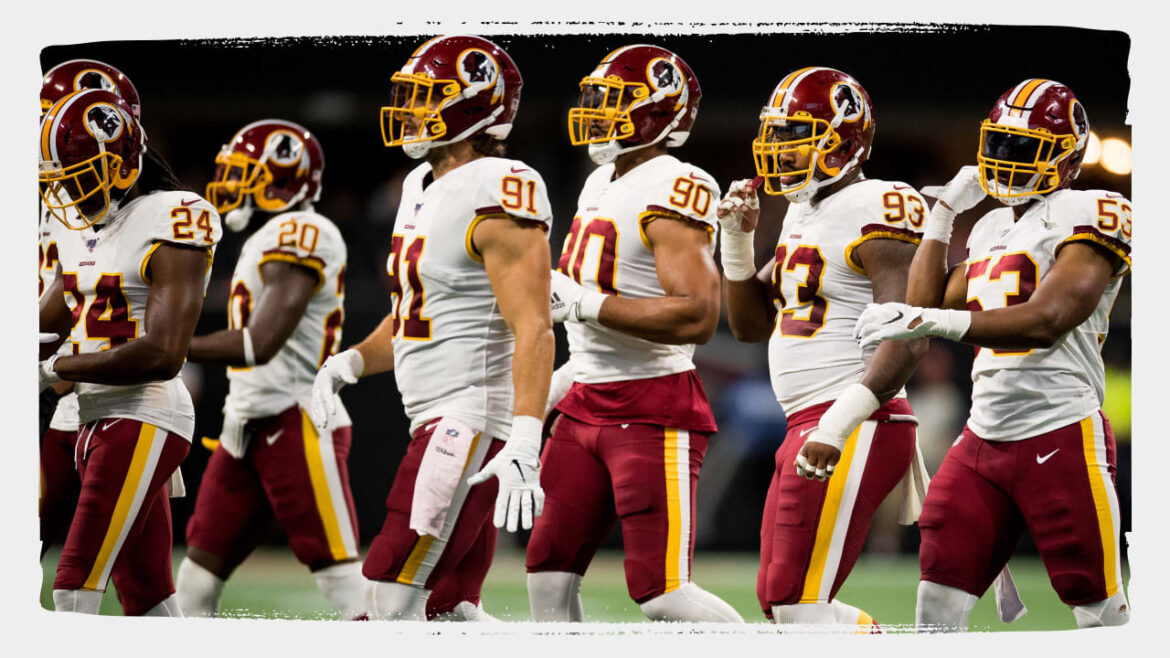 In recent weeks, national news media have reported on complaints lodged against Dan Snyder, owner of the NFL Washington Commanders (formerly the Redskins), for maintaining a “toxic workplace.” The exact nature of the “toxicity” has not been disclosed, although it’s probably safe to assume that it involves some level of what my grandma used to call “hanky-panky.” Then again, it might simply be demands that underlings do the football-equivalent of spinning straw into gold. Whatever the case, some insiders evidently consider the matter serious enough to merit a campaign to give Mr. Snyder the bums-rush, so he’ll have sell his ownership of the team – hopefully at a fire-sale price.

Like most Americans I have no idea whether the charges have merit. I do know, of course, that Mr. Snyder churlishly renamed the Redskins, after having repeatedly vowing never to do so. By my reckoning, that’s certainly enough reason to boot the rascal out. (Relax – just kidding. Well, not entirely.)

I mention Mr. Snyder’s situation because it’s another instance of the modern-day use of lynching as a business strategy. Most ordinary folks don’t know much about this because the strategy is used on business-people or government officials who operate far above our level. If the victim is some billionaire sports team-owner, the man-on-the-street just shrugs and says, “Well, he probably deserved it. They’re all crooks.”

The strategy kicks off when an insider accuses a team-owner or other business-tycoon of conduct or statements that might push some contemporary hot-button – racism, sexual harassment, transgender jokes, etc. Accusers raise hell about the charges – whether real or contrived – until media ambulance-chasers are drawn to the smell of blood. A move then develops to force the owner to sell out, with a line quickly forming of opportunists hoping to buy-in cheaply. Team owners are especially vulnerable because their continued ownership has to be approved by the league and its other owners.

The move against Mr. Snyder, still in early stages, is not unique. It resembles what happened a few years ago to Donald Sterling, owner of the NBA Los Angeles Clippers. In that instance Mr. Sterling evidently made some unguarded, racial remarks in a private conversation with his 38-year-old girlfriend, V. Stiviano, about her public associations with black players. (Miss Stiviano’s ethnic heritage was said to be black and Hispanic.) She apparently recorded Mr. Sterling’s controversial remarks while encouraging him to speak frankly.

Later, the recording came to the celebrity-gossip outlet TMZ, although Miss Stiviano claimed she did not release it. A spokesman for the LA Clippers initially was uncertain if the voice on the tape was Mr. Sterling’s, but later confirmation emerged that it was indeed the owner’s voice making racially disparaging statements. Mr. Sterling claimed he was unaware that he was being recorded.

Donald Sterling was then an 80-year-old married man. His dalliance with a girlfriend half his age – such as it might have been, at his age –had attracted not a word of commentary from national media or officials of the National Basketball Association. NBA spokesmen never commented on whether such extra-marital activity was considered acceptable by the league. (Some wags suggested that having a hot young girlfriend might even be an obligatory “proof of manhood” for superannuated NBA-team owners, but league spokesmen have not confirmed that.)

All this was passé to media hipsters: just a rich old guy pretending to fool around with a young girlfriend. Yawn… Nothing to see here – until the publicized content of the Stiviano recording hit the fan. Donald Sterling was known to hold some “eccentric” racial views, but, after all, he did donate a lot of money to various liberal causes, including the NAACP. Indeed, the latter had planned to honor Mr. Sterling’s benevolence with a Lifetime Achievement Award in the near future.

After the Stiviano tapes were publicized, though, all of Mr. Sterling’s generosity and good works – along with the Lifetime Achievement Award – went down the Memory Hole. He became the most hated man in America – denounced from every quarter, including the White House, and cast into Outer Darkness by professional race-hustlers everywhere. NBA Commissioner Adam Silver announced that Mr. Sterling would be banned from the NBA for life and assessed a fine of $2.5 million for “conduct detrimental to the league.” Mr. Silver also intimated that Mr. Sterling might be required to sell ownership of his team, depending on how the twenty-nine other NBA owners might vote on the matter. (A 75% majority was required to force Mr. Sterling to sell.)

Wow! Pretty tough punishment for a guy who thought he was discreetly telling his girlfriend not to flaunt her black boyfriends in public by sitting with them in his owner’s box at Clippers games. And all this from a possibly illegal recording that would never be admissible in court! Nevertheless, the bums-rush was on, with the odds running decidedly against Mr. Sterling keeping his team (or his girlfriend).

As the story continued to play out, a queue was quietly forming to buy the LA Clippers, should Mr. Sterling get the axe. New Zealand radio reported that various Hollywood moguls, sports stars and rappers were interested in buying the Clippers – hopefully at a “fire-sale” price – if the disgraced billionaire was forced to sell.

Rumors were also circulating that V. Stiviano had been “encouraged” – perhaps even bribed – by unknown parties to goad Mr. Sterling into making intemperate racial remarks, and record him doing so, in anticipation of the racial hurricane that might force the owner to sell his team.

Ultimately the NBA did impose the lifetime ban and the $2.5 million fine. Sterling’s wife Shelly reached an agreement for the Sterling Family Trust to sell the Clippers to Steve Ballmer for $2 billion. Mr. Sterling contested the sale in court, but the NBA Board of Governors’ approval of the sale stood. Mr. Sterling later settled his lawsuit against the NBA on undisclosed terms.

Employing a lynch-mob as a business strategy was a little unusual – but certainly creative and unquestionably effective. Not a bad month’s work, if you’re trying to make a semi-dotty octogenarian sell a valuable sports franchise. And now, here we go again, with Dan Snyder being fitted for the hemp necktie by a gang looking for a fire-sale. Mr. Snyder is only 58, but (hey!) it worked once…

Big media and (mostly) liberal politicians are on the warpath in “scalp-taking” mode. One imagines that many team owners are doing some serious soul-searching about skeletons in their own closets and the risks they might run if they string Dan Snyder up, as the slavering lynch-mob are demanding. ‘Is this a good precedent to set?’ and ‘Will I be next?’ are questions many owners must be asking themselves.

Modern technology for making secret recordings is available to most individuals, so there’s no telling who might have captured damaging “private” comments by what owner. New fortunes await faithless confidants who have recorded and stored comments that will have high value in the climate of racial frenzy now sweeping the land. Each week will bring new revelations, denunciations, and demands for resignation and/or divestiture. A child could see this coming, but there’s no telling how far it will go.

Thoughtful Americans might be asking why this is happening now. I have examined possible business motivations, but politics is also a likely factor. Democrats are especially eager to see media attention diverted away from their damaging issues: Undependable Green Energy; high gas-prices; a war on gasoline-powered engines; the staggering economy; inflation; political corruption of the DoJ and FBI; the crisis with Russia and the Ukraine; etc., etc. Of all possible news events, can anything guarantee complete media obsession like a scandal involving white men, racism, big money, and salacious sex? It’s a dream scenario for Democrats, who can be counted on to play it for all it’s worth. Stirring the stinkpot of racism also motivates Democrats’ minority base, going into the fall elections. The timing couldn’t be better.

Question: Do I care about Donald Sterling, his faithless girlfriend (a redundancy as ever was), and his racial remarks? Or about Dan Snyder’s toxic workplace – whatever that might be?

Answer: Not really. The Sterling-thing was absurd. Any 80-year-old man – even if he’s as rich as Croesus – who thinks a woman half his age might really “love” him, probably deserves the lumps he gets. This is idiocy raised to the 80th power.

What I do care about is the scurrilous idea that someone can be bums-rushed out of either a position or the ownership of a business by disclosure of something he said privately – even if those private remarks appear to be (gasp!) racist, sexist, or gender-phobic. Public statements are one thing. Had Mr. Sterling stood before a microphone and said, “I think black people are ba-deep, ba-dap, ba-doop… and I don’t want them anywhere near me,” then he would deserve the approbation of his league and his employees.

But he didn’t do that. He spoke privately about a sensitive personal matter, to someone close to him, in what he thought was confidence. She betrayed him by recording what he said, and then letting it be publicly aired. No moral person should approve of betrayal like this, and no reputable organization should honor it. It was disgusting.

When are we going to grow up about this kind of thing? If anyone mentions “race,” we slobber all over ourselves like Pavlov’s dog. We’re acting like 5-year-old boys who go crazy if someone mentions “underwear.” We are inviting big trouble if we let such disclosures legitimize future firings or divestitures without appropriate due process.

The question hanging over us like the Sword of Damocles will be: How far will this go? Will every white manager or executive or educator now have to fear that some stupid thing he said twenty years ago will come back to blindside him and produce his disgrace and dismissal? Is all privacy gone? Must all sense of personal trust be sacrificed on the altar of Political Correctness?

This has gone far enough. Mr. Sterling should have sued some people for their betrayal, and warned others that they were setting a dangerous precedent for themselves. He might have been old, stupid, and even a little cracked, but when did those things become crimes? If they are, we’ll have to lock up half of the Congress, most of the Cabinet, and the president.

“Some of the most poisonous people come disguised as friends and family.” (Gerald Sinclair)

“In everything, do to others what you would have them do to you…” (Matthew 7:12)

Lynch-mob as a Business Strategy was last modified: October 27th, 2022 by Woody Zimmerman

Ye is being lynched by the cancel culture. He predicted it and he is correct. I don’t agree with his anti-Semitic remarks but, at the same time, he is trying to point out injustices he has suffered. I saw the Carlson interview and some of what he said was basically true. It will be interesting to see if he recovers – looks like a tough road ahead.

Kanye is an asshole moron. What did he say that was true?