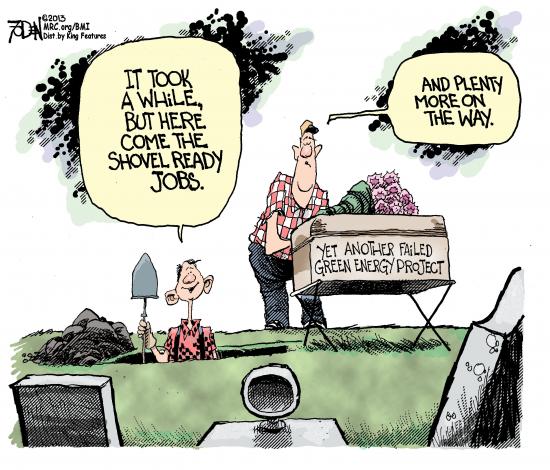 Mafia Model for Business and Government

Mario Puzo’s blockbuster book, The Godfather, on which two Academy Award-winning films were based, contained a story about a Mafia company that held a contract for building roads in New Jersey. The company used inferior cement and other materials to build roads too weak to bear heavy traffic. The same company also drove overweight trucks over those roads, causing them to break up and require more repair and rebuilding. It was a perfect, self-perpetuating business model.

That model came readily to mind in 2009 when President Obama proposed billions in federal spending on “shovel-ready jobs” to revive the anemic American economy. (Say, haven’t we heard that song before?) The “shovel-ready” moniker was pasted on a passel of crack-brained schemes that Democrats threw into a $1 trillion spending bill.

Much of that money went to prop up state and local governments – primarily ones under Democratic control – which had been spending like drunken sailors during the boom-decades of Reagan, Clinton, and the Bushes. (Those local governments were shoveling something, but you didn’t want to stand downwind from it.) Years later, Barack Obama admitted that “Heh-heh! Those shovel-ready jobs weren’t quite as ‘shovel-ready’ as we thought…” (Oh well, a trillion here and a trillion there. What the heck.)

As progressives see it, government spending to “cure” an ailing economy has two important aspects: (1) it accomplishes nothing except piling up more debt; and (2) the poor economic results always produce calls for more spending. At best, the “stimulus” has no effect; at worst, it actually does damage. Either way, more spending is needed to “get the economy moving.” But each new dose produces the same non-result. (Pols evidently think voters have a memory-span of about two weeks; and they may be right.) The cycle can continue indefinitely – no improvement of the economy, but more and more government spending demanded, with scads of new regulations thrown in.

This is the Mafia Business Model, elevated to new respectability. For pols who want more and more of the country’s economy brought under political control, it’s a dream scenario. Whether you agree with their objective or not, you have to admire their persistence. Like Lucy pulling the football away from Charlie Brown, Dems (and far too many RINOS) play this game over and over, and they keep winning with it. Somewhere in this mix of politics, media-hype and voter-expectations, something is deeply wrong. We can’t be this dumb, can we? But maybe we are. Shrinks say expecting different results from the same repeated behavior is one kind of mental illness. (Just sayin’…)

The Mafia Model originated not with President Franklin Roosevelt – as many believe – but with Herbert Hoover, soon after the stock market crash of October 1929. During the next three years of his term, President Hoover doubled government-spending and raised taxes significantly – all in an effort to jump-start a shocked economy that had lost billions in wealth on the stock-market crash and numerous bank-failures. But Mr. Hoover’s attempt to revive the economy via the Mafia Model was el-floppo. By 1932, unemployment was 25% and a quarter of the nation’s banks had failed, taking depositors’ money with them into oblivion. (“We’d like to thank you, Herbert Hoover, for really showing us the way…”1)

The bank-closures were hardly Mr. Hoover’s fault, though, since many banks had gambled depositors’ money away by buying stocks on margin2 – often as low as 10% – in the booming markets of the ‘20s. When values crashed, many banks went bust because they couldn’t answer their margin-calls. Often, depositors finished the job by making a “run” on a bank to try to retrieve their money.

All this was bad enough, but government should have learned that deficit-spending produces only demands for more spending. This is why I compare it to the Mafia’s self-perpetuating highway-business model. Unfortunately, our government “leaders” still haven’t learned that lesson. Maybe they don’t want to. After all, spending borrowed money on “recovery projects” makes it look like legislators are doing something. They really aren’t, but they’ll be long-gone before the voters realize it.

Franklin Roosevelt rode to victory in 1932 with a cigarette holder (cocked at a jaunty angle), promises of good times ahead, and a confident, patrician manner – grandly proclaiming that “the only thing we have to fear is fear itself.” FDR tossed the gold-standard so more dollars could be printed, but his spending and economic-control schemes worked no better than Mr. Hoover’s.

The Roosevelt brain-trust, however, was fully invested in Keynesian economics – not just firing random shots to see what might work. Dim-witted ideas like the National Recovery Act (NRA) – which actually ordered destruction of valuable crops to keep farm prices high, while people were literally starving – were mercifully struck down by the Supreme Court. But many New Deal programs survived for decades. Social Security and its $13.4 trillion unfunded liability is still with us. Economists predict that it will become insolvent in 2033.3

Leftists now accept as “revealed truth” the idea that raising taxes on high-income people produces more revenues. But it didn’t work for FDR, and never has since. This legend returns every few years, when another new gang of clueless young libs shows up. Those champions of high taxes never seem to realize that people wealthy enough to be subject to those high rates are smart enough to evade them.

By 1940, after his first two terms, FDR had racked up $43 billion in deficit spending – a huge sum when the annual federal budget was just $9.5 billion. The return from this unprecedented spree was a moribund economy, mired in a truly “great” depression, in which unemployment hovered near 20% until the eve of World War II. No amount of Fireside Chats, deficit-spending, and jaunty cigarette-smoking could pull the economy out of the ditch into which Hoover and FDR had driven it. Only the military aggression of Hitler, Tojo and Mussolini got America moving again with real manufacturing and production. War, not New Deal programs, ended the Great Depression.

Modern reporters and pundits – who “don’t know much about history” – proclaim the myth (now revered as holy writ) that FDR “ended” the Great Depression by spending us into unprecedented debt. This fairy tale has survived for almost a century because new generations of voters, who wouldn’t know the Great Depression from the Great Gildersleeve, keep showing up. This is the gang that elected Barack Hussein Obama because he promised to “fundamentally transform” America. He made good on that promise, but probably not in the way his gullible voters expected. One radio talk-show caller summed it up: “Sure, I voted for the guy, but I never thought he would screw up this badly…”

The Big O stayed true to FDR’s Mafia Model of stimulus-spending through his two terms, while blaming George W. Bush for the stalled economy. And since leaving office Mr. Obama has closed the loop by claiming credit for Donald Trump’s roaring economy. But Mr. Trump has ignored all that. Trusting his businessman’s gut, he has forged ahead: spurning the Mafia Model; lowering taxes; unshackling energy production; canceling burdensome regulations and blasting the economy off the launch-pad. Happy days are here again, and liberals are furious. They’ve thrown the kitchen sink at Mr. Trump, but nothing has stopped him.

In reaction to this renewed prosperity, a new generation of leftists is hawking socialism as a wonderful “new” elixir that will provide free college, free health care, open borders and a living wage (whether we’re working or not) – all paid for by stratospheric tax-rates on the “rich.” Our new saviors will “transform” our economic system and entire way of life to stabilize the climate and save the planet from blowing up (or freezing over, or flooding, etc.) in 12 years. Cost? No problemo. Although the bill for the Green New Deal would beggar the Gross Domestic Products of all the nations on earth, we’ll just print more money to pay for it. (In Tom Lehrer’s famous words: “We will all go together when we go…”)

Legions of teeny-boppers and stoned Millennials, joined by mature politicians one would have thought too smart to buy this cannabis-inspired claptrap, are running after a 29-year-old ex-bartender as though she is the next messiah with all the answers. Media hustlers love her because she’s a comely babe with a toothy smile who can talk the hind leg clean off a mule. Never, in more than six decades of following politics, have I seen a person of so little intellect get so much air-time to spout such a load of absolute nonsense as this new media-darling. (Is this a great country, or what?)

All seriousness aside – if “normal” Americans want to restore the nation’s sanity, they’ll have to start with a serious educational effort on the Mafia Business Model. No amount of deficit-spending can produce prosperity. Unless we embrace that truth, there’ll be no chance of keeping the Titanic from hitting the iceberg. When it does, many of us will wonder what happened as we go down with it.

These are desperate times. So write letters! Speak out! Vote! And (if you’re a praying person) pray! We need all the help we can get.

Mafia Model for Business and Government was last modified: May 22nd, 2019 by Woody Zimmerman