Mall Opened to Illegal Immigrants, but closed to WWII Heroes

UPDATE:  They must be expecting a huge crowd today, they have set up 100 porta potties to accommodate the crowd.  More here.   Picture from today is posted below.

While the National Mall, the monuments, and the WWII and Vietnam memorials remain closed, the Park Service has opened the Mall for a Tuesday Rally for Immigration Reform.   The event is sponsored by several immigrant groups, and the SEIU and the AFL-CIO.   Nancy Pelosi (D-CA) and Robert Menendez (D-NJ) will be in attendance.

In this picture the group is setting up their large and elaborate stage on the Mall, right in front of the Smithsonian museum.  The museum is closed to the public and so is the Mall in front of it, closed to Veterans and legal citizens of the United States but open to illegal immigrants and their liberal supporters.  Thanks President Obama! 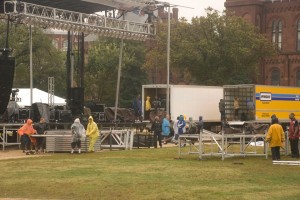 Check out this top notch security on the mall today.  Compare it to the guards and gates around the WWII Memorial. 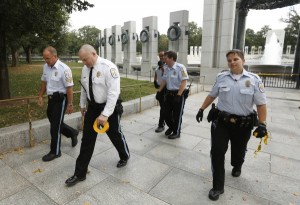