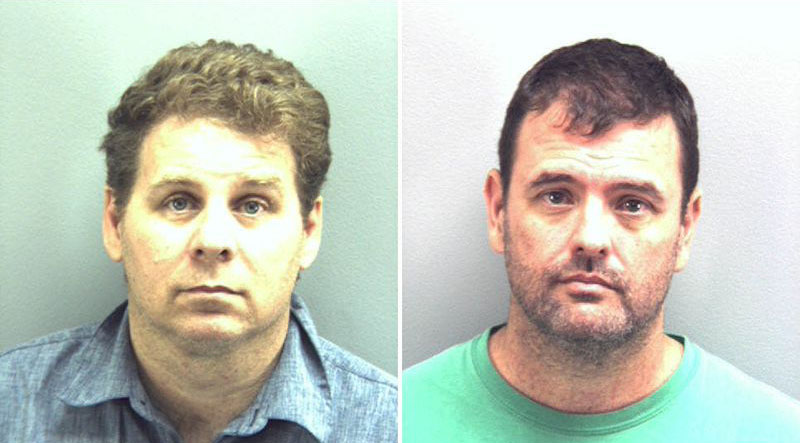 Christopher Schmidt, left, was set free despite Richard Stoner, right, admitting Schmidt hired him to kill his wife in 2004. Stoner may also go free since Democrats abolished the death penalty in Virginia.

Hitman who killed wife, son, dog, injured her brother, and set fire to a house in Va. Beach may go free, too

When Democrats who control the Virginia General Assembly abolished the death penalty in February, the liberal media was glowing.

Only three Republicans in the whole General Assembly joined the Democrats in abolishing capital punishment.

Their primary reason explained here by Gov. Blackface Northam, still seeking to help criminals in order to repent for his racist past:

“We know that this Commonwealth’s use of capital punishment has been inequitable,” Northam continued, explaining that, in the 20th century, 296 of the 377 people executed for murder in Virginia were Black. “We can’t sentence people to that ultimate punishment knowing the system does not work the same for everyone.”  [Note: there is a disproportionate of violent crimes committed by black males]

“The racism and discrimination of our past still echoes in our systems today,” Northam continued. “And as we continue to step beyond the burden of that past, it is vital that we also change the systems in which inequality continues to fester… There is no place today for the death penalty in this Commonwealth, in the South or in this nation.”

But this week, we saw the negative consequences of Democrats’ pro criminal agenda in Richmond–  a white hitman, hired by a white man to kill his wife in 2004, and who also killed their 7-year-old-son and a dog and set fire to her parents’ Virginia Beach home afterward, may go free because he is withdrawing his guilty plea, which was predicated on him avoiding the death penalty.

In addition, hitman Richard Stoner does not want to testify against the man who hired him, Christopher Schmidt.  So, without his testimony, prosecutors this week agreed to set Schmidt free!

Here is the background from The Virginian Pilot:

>>>For the past three years, Christopher Schmidt has been held without bond in the Virginia Beach city jail on charges accusing him of hiring a hitman to kill his ex-wife.

But late Tuesday afternoon, the 49-year-old Schmidt was set free. Prosecutors had asked a judge to withdraw all charges against him earlier that day.

The reason? Stoner is refusing to cooperate. Without his testimony, prosecutors don’t believe they have enough evidence to win a conviction against Schmidt.

Prosecutors, however, hope to convince Stoner to work with them, said Macie Allen, a spokeswoman for the office. If they do, they’ll bring back the charges against Schmidt, Allen said.

In 2019, Stoner entered pleas to various murder charges and agreed to testify against Schmidt after prosecutors promised not to seek the death penalty against him.

But when capital punishment was abolished in Virginia this summer, Stoner asked to withdraw his pleas.

Defense attorney Matthew Morris argued during a hearing last week the change in law invalidated the deal. Frucci agreed and allowed Stoner to withdraw his pleas.

Since then, Stoner has said he plans to invoke his Fifth Amendment rights against self-incrimination if called to testify at Schmidt’s trial, which was scheduled to start Sept. 27.

Stoner testified for hours at a 2019 preliminary hearing for Schmidt. He told the judge Schmidt hired him only to kill his ex-wife, Lois Schmidt, but he ended up killing her 7-year-old son, too, and seriously injuring her brother. Two family dogs also were shot, with one surviving.

Lewis, however, said the case law was clear that any decision on whether to allow transcripts into evidence couldn’t be made until Stoner was called to testify during the trial and then refused.

Prosecutors argued they needed a decision in advance because without Stoner’s cooperation — or the transcripts of his previous testimony — they would have to end their case in the middle of trial. The double jeopardy rule that prevents them from trying a defendant twice on the same charges would keep them from trying it again later.

The shootings happened in 2004 at a Virginia Beach home Lois Schmidt shared with her parents. The house was set on fire afterward.

The case remained cold until 2018, when investigators said they’d obtained a confession from Stoner.

While Schmidt’s charges have been withdrawn, Stoner still faces trial in the case. No date has been set, Allen said.

The confession Stoner is alleged to have given police can be presented at his trial, but it couldn’t be admitted at Schmidt’s because it would be considered hearsay evidence, Allen said.<<<

In my view, all Republican candidates, from Glenn Youngkin down, need to support restoring the death penalty.  This sad incident is yet another example of the Democrats kowtowing to criminals and turning a deaf ear to the victims.  Plus, a 2020 national poll shows 55% of respondents favor the death penalty for certain crimes.

Man who paid hitman goes free due to Democrats getting rid of the death penalty was last modified: September 23rd, 2021 by Guest Contributor Ken Reid

“Blood LUST”… I would hate to be on his blood list…

I bet Roger Coleman and Joseph O’Dell are happy the death penalty has been banned in Virginia…. oh… wait… nevermind….