Not surprisingly, the Ford F-series truck is the best selling vehicle across the country, number one in 30 states. Â Oklahoma stands out as an anomaly in the middle of the country, preferring the Nissan Altima sedan. Â  Virginia, New York, and New Jersey drivers like the Honda Accord. Â  In Florida and Maryland, it’s the Toyota Camery. Â California is the only state that prefers a Honda Civic. Â Click on the map below to enlarge. 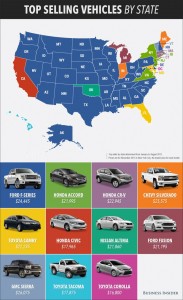