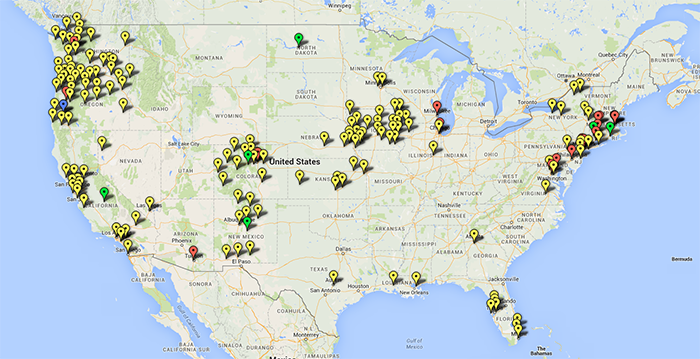 Interactive Map of Sanctuary Cities, Counties, and States, here.  Even Virginia now has a sanctuary county.

The number of jurisdictions that are obstructing immigration enforcement has grown to roughly 340, according to the Department of Homeland Security.1 This has resulted in the release by local authorities of approximately 1,000 criminal aliens per month.

According to an updated report prepared by Immigration and Customs Enforcement (ICE) for Congress, between January 1 and September 30, 2014, local sanctuaries released 9,295 alien offenders that ICE was seeking to deport. More than 600 people were released at least twice.

Out of these, 5,947 of the criminal aliens (62 percent) had significant prior criminal histories or other public safety concerns even before the arrest that led to a detainer. Fifty-eight percent of those with a prior history of concern had prior felony charges or convictions; 37 percent had serious prior misdemeanor charges, and 5 percent had multiple prior misdemeanors.

An alarming number — 2,320 — of the total number of released offenders were subsequently arrested within the time period studied for new crimes after they were released by the sanctuaries.

Read the details and see the map here.

If Loudoun goes Sanctuary I’m gone…no where in the WORLD would anyone…ANYONE…be protected from prosecution for an unlawful act…except here…THEY ARE ILLEGALLY HERE PEOPLE…I can’t go to Switzerland ILLEGALLY, and expect to be exempt from prosecution if I kill some one…nor could I go to IRAN…nor any other country IN THE WORLD!!!! Wake up people!!!!

One of the interesting things that I have discovered is that illegal aliens violate many Virginia State Laws and do not see prosecution for these violations { immunity because of poor leadership }.
When discussing this issue having state violations in hand to verify with Virginia Republican Senators and Delegates they 100% of the time blame illegal immigration problems with DC.
On Obama’s last days he will grant citizenship to illegal immigrants and Virginia will still have the existing shadows to hide MS-13 , drug dealers , child molesters , child support dodgers and murderers.
Virginia will continue to create a public safety and National Security issue as they are and have been for the last 12 years.
http://watchdog.org/202012/subcontractors-shadow-economy-
200 violations in Lynchburg area alone issued by VOSH { Commissioner Malvauex } went undetected by the VEC { Commissioner Broadway } in audits performed under the Virginia Employment Compensation Act.
Either VEC Auditors training is pre 9/11 or they are bought and paid for.
Politically appointed Commissioners only seek to impose thier elected superior’s activist political party veiwpoint.
Shame shame , who was our elected Attorney General then ?