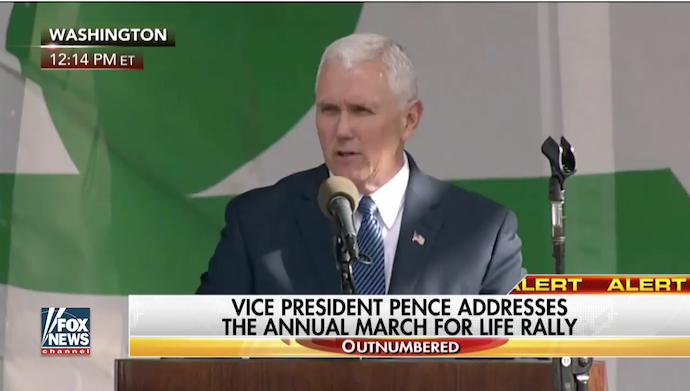 People young and old (but mostly young), women and men (but mostly women) from all over the country converged on the National Mall today for the Annual March for Life.

What has become an annual pilgrimage for many staunch pro-life activists this year took on added significance with the victory of Donald Trump over the devout pro-abortion Hillary Clinton.  Most pro-lifers, even those skeptical or distrustful of Trump, remain hopeful that the Republican administration will advance the cause of life, both through a GOP-controlled Congress and through court appointments.

This hope was underscored today by the fact that Vice President Mike Pence became the first sitting Vice President to address the annual rally in its 43 year history.  Pence’s speech, which was received to raucous applause, immediately followed an address by top presidential counselor Kellyanne Conway.

I stopped by on my lunch break to snap a few photos, and gather a few impressions.  Here’s the view from the back of the crowd while Pence was speaking: 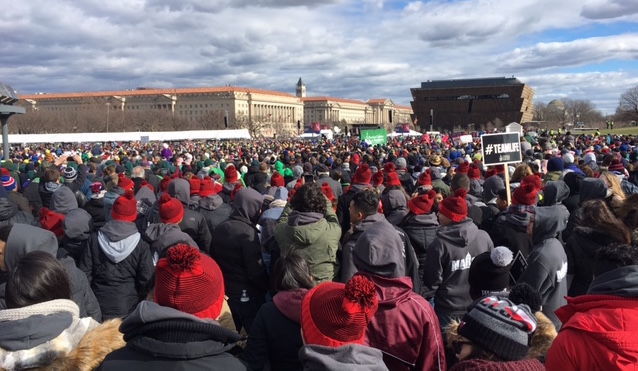 This photo shows a long white tent on the left, under which were the security checkpoints to get into the actual rally venue. The thousands of people in front of me were among those who couldn’t make it inside.

Another view, looking down from near the Washington Monument toward the intersection of 15th and Constitution: crowds to the horizon. 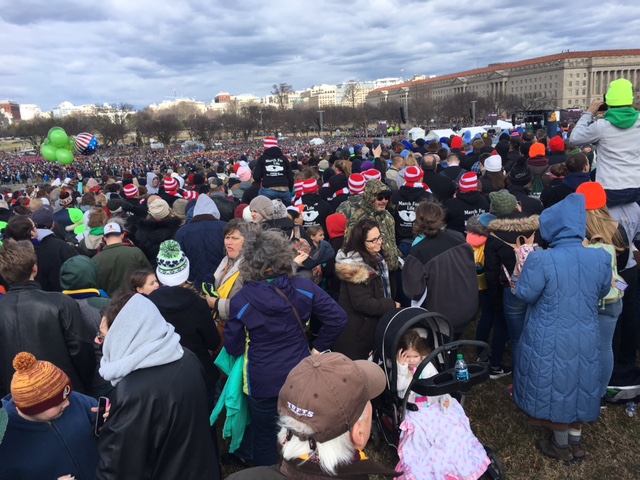 Several things struck me about this crowd.  The first and most defining characteristic of those in attendance was their youth.  At least half of the people there were under the age of 30, and many made a point of chanting that they were the “Pro Life Generation.”  A good deal of the young people involved appear to have come with church groups, or with Catholic school groups.  Apparently the University of Notre Dame and several other Catholic colleges and universities sent several thousand students as well. 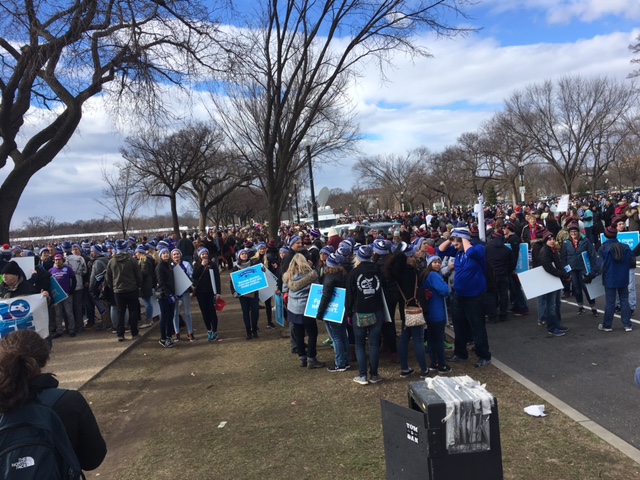 That’s another salient characteristic of the event: it’s Catholic-ness.  I don’t think I’ve ever seen so many nuns, priests, seminarians, robed monks, and Knights of Columbus types in one place at one time ever before.  Catholics do Life Proud!  Right on.

At bottom, though, the event is as much or more about politics as it is about spirituality.  Ed Gillespie, a long time pro-life warrior, was on hand to march and even met with Vice President Pence.  Here he is with The Bull Elephant‘s own Willie Deutsch and Pete Snyder, back stage at the event. 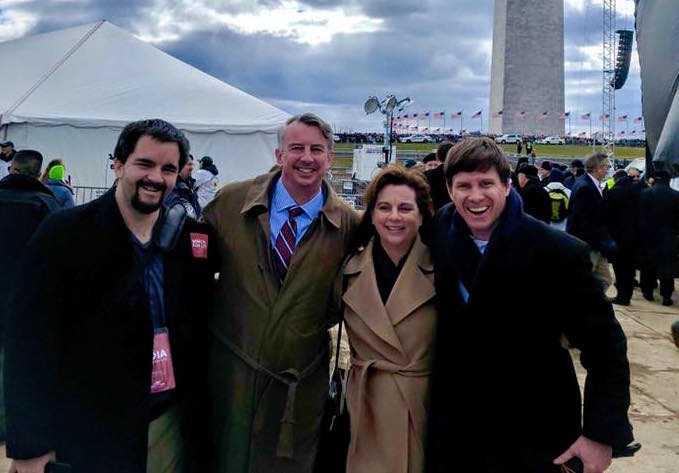 Corey Stewart, for his part, was also in attendance (though clearly not in the good graces of the Trump folks). 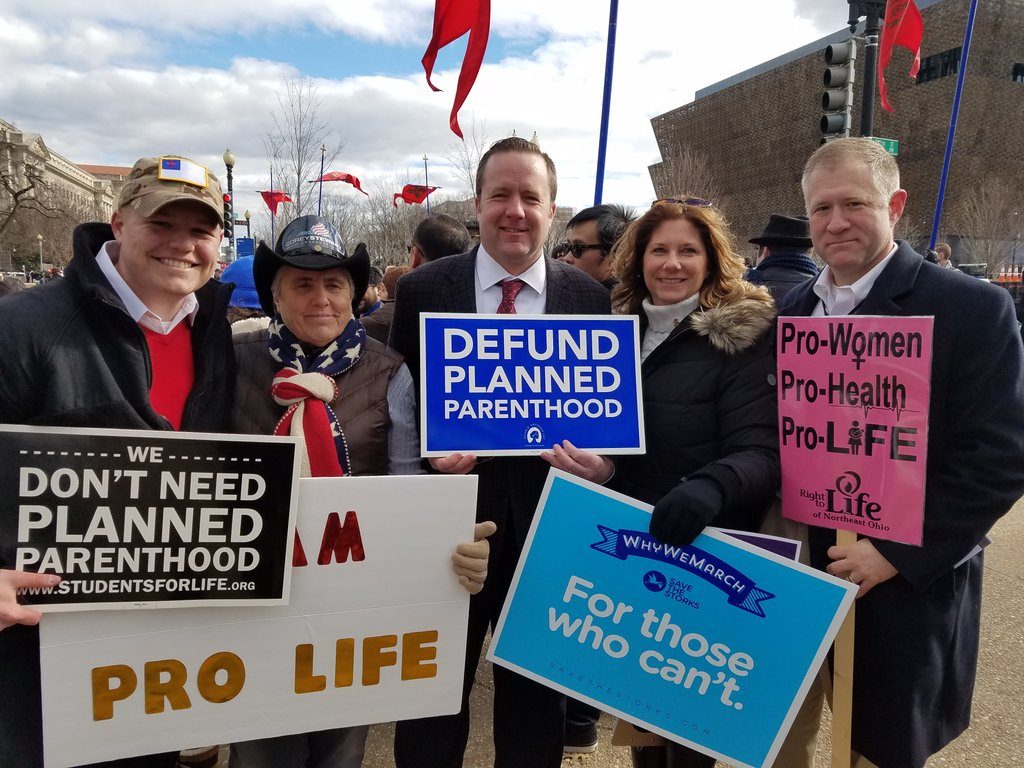 I’m told Stewart was claiming to supporters that Gillespie would not be there.  Yet, there’s this: 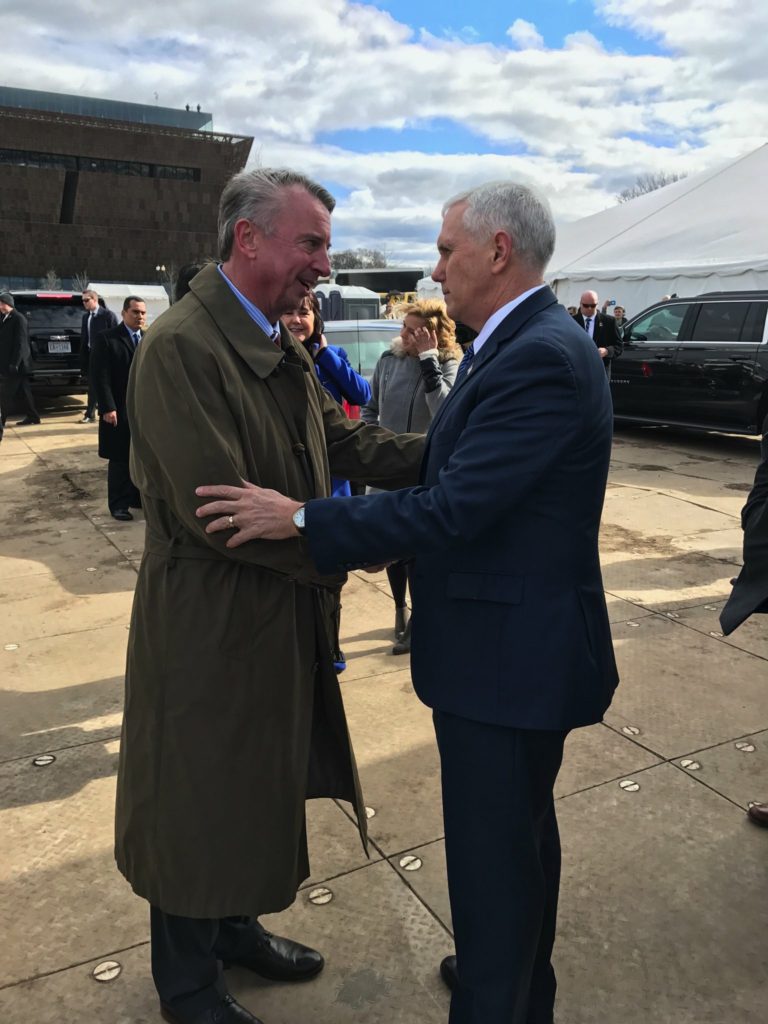 As devout TBE readers know, Stewart gave himself some credibility problems yesterday when he made the astoundingly dishonest assertion that Gillespie favors late term abortions.  Our own Steven Brodie Tucker gave him what for here. (Heck, even Bearing Drift—not exactly known for honesty or for supporting conservatives—joined in on the criticism).  Clearly this year’s March for Life is a good opportunity for Stewart to repair some of the damage, and he was smart to take advantage of it.

The big story coming out of the event, to the extent the media cover it at all, will likely be the turnout figure, which will be contrasted against that of the so-called Women’s March of last weekend as a barometer of actual grassroots support or opposition for the new administration’s policies.  This is a false comparison, of course, as I can bet that a fair portion of the people in attendance today aren’t Trump fans, but showed up out of principled conviction for Life.  By contrast, last weekend’s carnival of crudity and crass condescension was pure spite aimed at the new president.  Apples and oranges, but in any event, I suspect the numbers will compare favorably.

I’m no expert, but my guess is we’re looking at at least several hundred thousand people today, and that’s a great thing for Life in America.