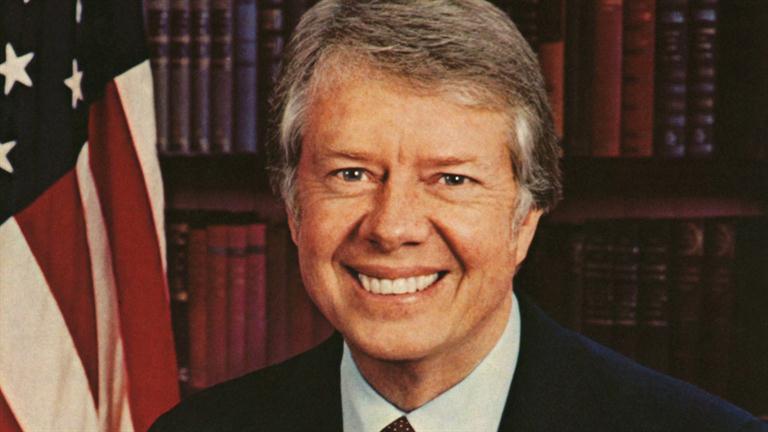 (Second in a series.)

As mentioned in the first article of this series, a mystery candidate runs on his persona, his deportment and possibly on his wardrobe – sometimes assisted by an interesting diversion – while keeping his intended policies and governing style veiled from the voters. All Democrats who have won the presidency since 1960 have done so as mystery candidates.

Previously we looked at the candidacy and presidency of John Kennedy, who ran on his good looks, charm, and New England patrician style. His beautiful wife and handsome family helped, too. He squeaked into the presidency with the help of a mild recession and known election fraud, without indicating how he would govern except to say, “We can do bettah.” His surprise attack on Southern racial segregation and his anti-crime campaign against the Mafia disquieted Democrat constituencies and the criminal element. Historians are still arguing over whether either (or both) of these controversial initiatives might have caused his death.

After JFK’s assassination, Lyndon Johnson boosted the economy by signing JFK’s intended tax-bill. It cut the top income-tax rate from 95% to 70%, and cut rates significantly across all income-strata. He also signed the 1964 Civil Rights Bill, which guaranteed voting rights to all minorities in states where those rights had been withheld for decades. Southern Democrats filibustered the bill in the Senate for 77 days, until Senator Everett Dirksen (R-IL) broke the filibuster by publicly denouncing Democrats’ opposition. It was the first time in history that a filibuster of a civil rights bill had been overcome in the U. S. Senate.

Unfortunately, LBJ also launched the Vietnam War in 1965 – calling for 500,000 troops to intervene in the war that North Vietnam and the Viet Cong were prosecuting against South Vietnam. Mr. Johnson called for war because of a much-hyped incident just before the 1964 presidential election, when North Vietnamese gunboats reportedly fired on an American destroyer in the Bay of Tonkin. Some historians believe Mr. Johnson contrived the incident in order to bolster his Commander-in-Chief image, going into the election. In later years, new evidence has suggested that the Tonkin-incident never actually occurred.

Whatever the case, LBJ was decisively elected and took us to war. But he was sensitive about not letting the war impact civilians’ lives. “We can have guns and butter,” he proclaimed, by way of assuring voters that his little war in far-off “Veet-namm” would not inconvenience them. The result was a war “on the cheap” that dragged on far too long, chewed up thousands of our young men, and failed to interdict the enemy’s territory – thus allowing North Vietnam regulars and the Cong time to rearm and refresh. Conscription was still in force, so by 1968 a full-throated anti-war movement, led by Senator Bobby Kennedy, was sweeping the political field.

Then, at the opportune moment, with the peaceniks in full cry, the North Vietnamese army and their Viet Cong allies launched their 1968 Tet offensive, which surprised our forces. The offensive was a military failure for the commies, but wildly successful, politically. Respected newsman Walter Cronkite pronounced the war “lost,” and other reporters followed his lead.

A national groundswell arose against the war. LBJ said he would not stand for re-election, and the race was on for the Democratic nomination. Mr. Kennedy was looking good to win it, but after his assassination in California on June 5th, all the cards were thrown up in the air. Riots by stoned hippies at the Democratic National Convention, opposed thuggishly by Chicago police, offended the public and hurt Democrats’ nominee, Senator Hubert Humphrey. In November, Richard Nixon carried the election after segregationist George Wallace split the Democratic vote by winning 46 electoral votes of five southern states.

Mr. Nixon had promised to end the fighting. He did, but it took him four years, by which time he owned the war. After he won re-election in 1972, his presidency was mortally wounded by a double whammy:

Left-leaning Democrats had never forgiven Mr. Nixon for his anti-communist activities on the 1940s House Un-American Activities Committee. Now they collected on their long-held grudge and swooped in for the kill. Under pressure from Senators of his own party, Mr. Nixon resigned in August 1974.

Appointed as vice-president after the resignation of Spiro Agnew, Gerald Ford became our first unelected president. He was a widely respected Michigan politician – a World War II veteran who had served 25 years in the Congress. But Mr. Ford immediately scorched his brand-new presidency by issuing a comprehensive, forward-looking pardon of Richard Nixon during his first week in office. This was unnecessary, since the Constitution protects a president from prosecution for any conduct during his presidency. But it probably spared the country the ongoing agony of attempts by Nixon-haters to do exactly that.

Democrats were enraged by the pardon, which deprived them of years of joyful Republican-bashing. Thus, for the entire two-plus years of Mr. Ford’s tenure, Dems and their media-comrades subjected him to an unending barrage of negative reporting, including a truly vile campaign to depict him as our clumsiest president ever. A fine college athlete, a 1930s pro football prospect, and an excellent golfer, Mr. Ford skied well into his 70s. But media relentlessly recorded every stumble or errant golf-shot to pin a permanent “clumsy” label on the finest athlete ever to sit in the Oval Office. The smear is still mentioned in his biographies.

In April 1975 North Vietnam broke the 1973 armistice, sent their armies sweeping into South Vietnam, and subjugated the entire country in a matter of weeks. Deprived by the Congress of any funds for military action in the region, Mr. Ford could do nothing as 50,000 American combat-deaths and the expenditure of hundreds of billions went down the drain. The debacle wasn’t Mr. Ford’s fault, but it did happen on his watch. It was a real tragedy.

Carrying all this baggage, Mr. Ford was no match for “born again” Jimmy Carter and his toothy smile in the 1976 campaign. With the smoke from the Nixon-crash still lingering in the air, voters were ready to have a “respectable” Democrat take the reins. Mr. Carter widely proclaimed his Evangelical Christian bona-fides, while less religious Democrat pooh-bahs lay low. In fact, Mr. Carter’s born-again shtick conveniently diverted attention away from his liberal political history and likely governing objectives. Millions of Evangelical voters, who might ordinarily have viewed a Democrat with skepticism, gave “Brother Jimmy” a pass because of his professed faith and genteel Southern deportment.

Several members of the church we attended then said they would vote for Mr. Carter because of his professed faith. They brushed aside my warnings that the old-time Democrat operatives who would join Jimmy in the White House would make them forget all about his “born again” persona. It was, I realized, the first time that a profession of faith was actually used to veil a Mystery Candidate’s political leanings. Later, after the “scales” fell from their eyes, some of those church members had the grace to admit that I had been entirely right about Mr. Carter.

Soon after taking office in 1977, President Carter followed through on his faith-based campaign by publicly advising members of his administration who might be “shacking up” to make it legal. I can’t recall if he mentioned “living in sin,” as we used to call “cohabiting without benefit of clergy.” Even in the Sexy ‘70s the practice was still considered scandalous by respectable society.

For his efforts to make honest women (and men) of his White House staff, Jimmy got the horselaugh from the media’s blow-dry set. (Imagine! The nerve of the guy…) There is no record of how many shacked-up Carter-administration couples actually tied the knot. My guess is that very few did. Led by our media high priests of morality, America was moving on, and POTUS was seriously out of touch. Mr. Carter got a double “E” for Evangelical Effort, but that concluded his religious campaign as president.

With the country – indeed, the world – in an uproar over oil-shortages engineered by the Organization of Petroleum Exporting Countries (OPEC), Mr. Carter made TV-appearances wearing a wool sweater. He urged Americans to turn down the thermostat and conserve as much energy as possible. But his efforts in that vein were widely mocked by Americans who had no tolerance for being horsed around by a bunch of Arabs who thought they controlled the world.

During these years, the country seemed unable to pull out of its “slough of despond,” and Mr. Carter seemed incapable of leading confidently. In one forgettable press conference he scolded us for being in a state of “malaise” – essentially telling us to snap out of it. But that didn’t go down well with voters, either. It turns out that Americans like being scolded even less than we like losing wars or being hustled by Arab oil-sheiks.

Although he kept his sympathies pretty well-hidden, Mr. Carter actually favored Muslim politics in the Middle East. This became obvious when he supported removal of the Shah of Iran and dissolution of the Peacock Throne. He was enthusiastic about formerly exiled Ayatollah Ruhollah Khomeini’s return to lead Iran’s revolution and transform the country into an Islamic state.

I don’t know if Mr. Carter thought his support of Iran’s Islamic Revolution would keep him in the good graces of the Ayatollah, but if he did, he got a rude surprise on November 4, 1979, when a gang of Iranian “students” stormed the American embassy in Tehran. They trapped fifty-two American embassy-workers there, and held them hostage through the balance of Mr. Carter’s term – a total of 444 days. It was a disaster from which the Carter presidency never recovered.

Sensing American weakness, Soviet troops invaded Afghanistan a month later and launched a nine-year war. Ultimately they failed to subdue the Afghans, but our inability to stop the Soviet-incursion inflicted another wound on the Carter presidency.

The coup de grace came in the midsummer of 1980, when Mr. Carter attempted to direct a military rescue of the Tehran hostages from the Oval Office. But a series of reverses, including the crash of one helicopter, caused the mission to fail. Subsequently, we had to watch disgusting TV footage of the bodies of dead American soldiers being paraded through the streets of Tehran past crowds of jeering spectators. After that, Mr. Carter was kaput.

An experienced veteran whom I know says Mr. Carter, a Naval Academy grad, suffered from “mid-grade officer syndrome” – an affliction which compels certain officers to show that they can direct complicated ops without any “expert” help, instead of assigning command to the toughest, most experienced warriors available. The mission’s failure sounded the gong of “doom” for Jimmy’s presidency. In November 1980 Mr. Reagan’s juggernaut rolled over Mr. Carter and shocked the whole world.

Millions of voters – particularly conservatives who thought all would be well if they put a (literal) Sunday School teacher in the presidency – learned a memorable lesson from Mr. Jimmy’s tenure. That lesson is that in a job as complex as the presidency it’s not enough to be a “good man.” You need someone who knows how to get things done at that level. Mr. Carter – good man though he might have been – was not that guy.

But realizing when a Mystery Candidate is pulling the wool over our eyes was a lesson we had not yet learned. Some harsh lessons still lay ahead.