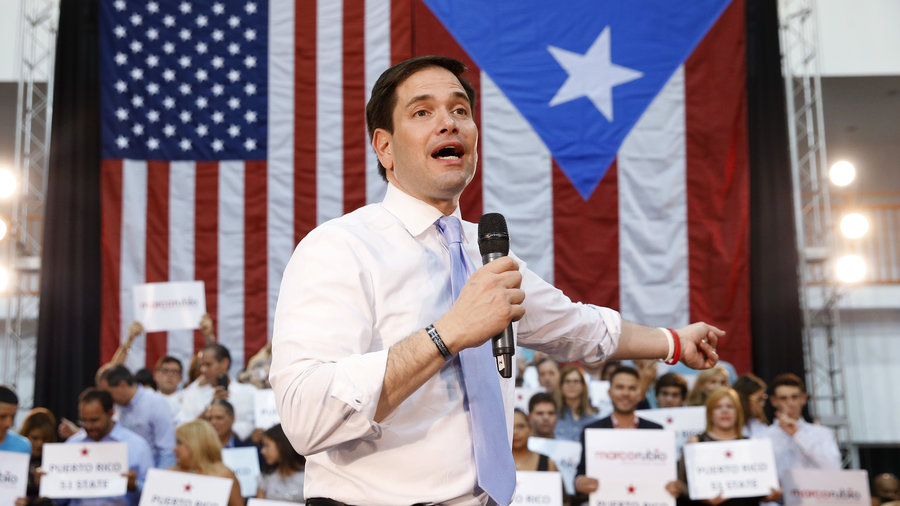 Ted Cruz won big Saturday night in Kansas and Maine, and came within a few points of beating Trump in Kentucky and Louisiana.  Where was Marco Rubio?  Third or fourth place in all these contests, making him 1 for 18 after his win in Puerto Rico on Sunday.  The delegate totals now stand at:

— The biggest story line out of last night, though, is calamity for Marco Rubio. It was his worst showing since the New Hampshire primary – and arguably more damaging. The floor appears to be falling out from underneath the Florida senator: Not only is his win-loss record now 1-18, but he took a 17 percent in Kansas despite canceling events elsewhere to campaign in the state and receiving endorsements from Gov. Sam Brownback, Sen. Pat Roberts and Bob Dole. He got 16 percent in Kentucky, 11 percent in Louisiana (with ex-Gov. Bobby Jindal’s support) and just 8 percent in Maine—where he finished fourth behind John Kasich.

Here’s a hard truth for the D.C. political class: There’s almost no appetite at the grassroots level for an establishment nominee this year, and Rubio is now undeniably the establishment candidate.

Rubio is clearly not the candidate who can unite our party.  On Sunday there were more calls for Rubio’s resignation from the race.  Joe Scarborough didn’t mince words:

Morning Joe host Joe Scarborough calls it “a Saturday night massacre for Rubio”: “If the Florida senator wants to salvage his political career, it is time that his quixotic quest for the White House comes to an end,”he writes in his new column for The Post. “The senator still has time to salvage a political career damaged by his lackluster presidential campaign. But that won’t still be the case if Rubio hangs around this race long enough to be embarrassed by Trump in his home state of Florida. If that were to be the case, the once promising senator would be forced to live out his professional life as a Beltway lobbyist…”

Erick Erickson put it this way:

“For the good of his country, not just his party, it is time for Rubio to [get out] and unite with Ted Cruz. … Team Rubio argued aggressively [over the past week] that Cruz’s best states were now behind him and Rubio would start gaining steam. Tonight proves that this was another massive strategic miscalculation.”

The other big story was the collapse of Marco Rubio, who wasn’t a factor anywhere. Something has clearly hurt him, whether the tone of his attacks on Trump, Trump’s constant belittling of him, his lackluster debate performance, or all of the above. Absent a surprise on Tuesday or a fantastic debate next week, Rubio is going to be limping into the political fight of his life in Florida a week from Tuesday.

Another primary night & more clear that there is ZERO desire or hunger for Rubio (Bush 3.0). A total fabrication of the Donor Class.

It looks like Rubio should drop out but probably won’t until after March 15 when Florida has their winner-take-all primary.  Rubio might be able to save a bit of face if he quit before the 15th since he’s down 20 points to Donald Trump.  And Cruz isn’t giving up in Florida.  Cruz is opening 10 new campaign offices in Florida over the next week.

Say goodnight Marco.  The party’s over.

Hey all you elitist, globalist, “Republicrats” and “Cuckservatives”…
Tick-Tock -Tick-Tock-Tick-Tock…