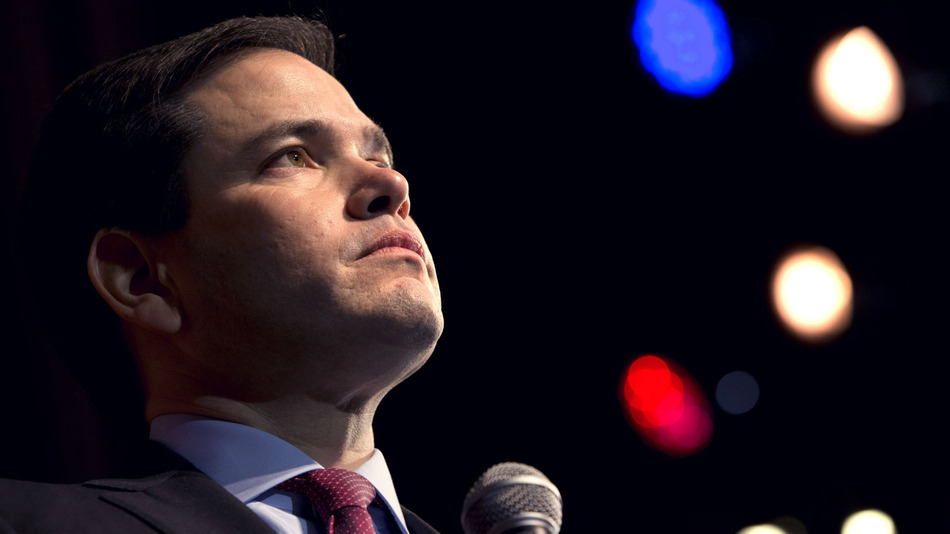 Right now I am sure you are celebrating your impressive win in Puerto Rico, picking up all 23 delegates in the US territory, but it’s not enough.  Even with those delegates you still came in third over the weekend, far behind Donald Trump and Ted Cruz.  While Cruz gained ground on Donald Trump, you lost ground to both of them.  You failed to meet the minimum threshold to share in the at-large delegates in both Maine and Louisiana.  You have half as many delegates as Ted Cruz.  Even if you won Florida, where you are losing in the polls, you still wouldn’t catch Ted.

You previously criticized Ted Cruz for not winning the south where you say his strength was, and that the map would soon shift in your favor, but we have now seen Ted Cruz win 6 states in the South (Texas), in the North (Maine), in the Midwest (Kansas, Iowa, Oklahoma), and in the West (Alaska).  The upcoming map has many more Midwestern and Western states that are far more receptive to the kind of grassroots, fed up with Washington, conservative message that Ted Cruz is offering.

But there is more going on here than just your lack of delegates.  The voting this weekend showed a distinctive shift.  Previous contests had Donald Trump in a solid first place with you and Ted Cruz essentially tied for second.  Now we are seeing Ted Cruz win some states overwhelmingly, or essentially tied with Donald Trump for first place, while you are a distant third (or even fourth).  Those results make three important points:

1.) We have a clear indication where a majority of Ben Carson’s supporters are going.  They have switched to Cruz.

2.) Your “Mini-Trump” routine was not a winning strategy.  In getting down in the mud with Trump, you have done more to tarnish your own name than to bring Trump down.

3.)  The voters are making it clear that they want a real alternative to Donald Trump, and they have decided it is not you.

Now you have a real choice to make.  Let’s call it “Marco’s Moment of Truth.”  You can stay in the race and fight it out to the bitter end, or you can leave the race now and give Ted Cruz a real chance to become the Republican nominee.

If you stay in the race, you are going to lose Florida and hand those 99 delegates to Donald Trump.  You are losing Florida in the polls, Jeb Bush still hasn’t endorsed you, and the sitting Republican Governor of Florida has said he is not endorsing anyone in the race.  What does that tell you about your chances?

If you stay in the race, you will continue to steal a portion of the conservative vote away from Ted Cruz, giving more states to Donald Trump.  You will guarantee that Trump wins the 1237 delegates he needs to win the nomination, where he will lose to Hillary Clinton in November.  Without you in the race, Ted Cruz would have won South Carolina, Arkansas, Kentucky, Louisiana, and he would have taken over 50% of the vote and all of Texas’ 155 delegates.  With you in the race, there is no real chance for the anti-Trump vote to coalesce around one candidate.

If you leave the race now, you may not hand Florida to Ted Cruz, but you will help him in many other states.  Without you in the race, Cruz could win Hawaii, Idaho, Michigan, and Mississippi on March 8th.  He could win Missouri, North Carolina, and Illinois on March 15th.  You could even help him win Ohio.  The latest polls in Ohio show Ted Cruz only down 10% to Trump, and this was before Ben Carson dropped out and before the significant shift in the electorate this weekend.  Ohio is in play and you could tip the scales, knocking out John Kasich in the process and making the race a true two-man race.

If you stay in the race, especially after you lose Florida on the 15th, it will mean only one thing.  You are hoping for the establishment to hand you the nomination in a brokered convention.  If that happened, it would spell doom for our party.  Donald Trump would immediately launch an Independent bid.  The grass-roots would abandon you as they watch the two outsider candidates who won a vast majority of the delegates between them shunted aside for the hand-picked candidate of the moneyed special-interests.  That may not be a fair characterization of your campaign, but that’s what people would see.

You would lose and lose badly.

The best chance we have as a party right now is to beat Donald Trump at the ballot box.  We need a candidate who can secure the 1237 delegates needed to win on the first ballot in Cleveland.  We need a candidate that Trump supporters could feel comfortable supporting and bring them back into the fold.

That candidate is not you, Marco.

What will you do?