The Gillespie campaign is wisely making the most of Mark Warner’s corrupt errand in service of Obamacare. [read_more]

A quick refresher for those not paying attention: 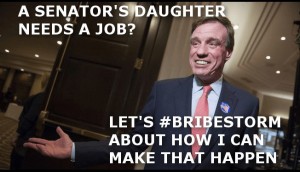 Back in June, when the leadership of the General Assembly reached agreement with the Governor to pass a so-called clean budget (i.e., one with the provision buried in it that Gov. McAuliffe was relying on to expand Medicaid on his own), thus ending the fake standoff over the budget, Mark Warner was enlisted by McAuliffe’s staff to help protect that Medicaid deal by keeping Democrat state senator Phil Puckett from resigning.

What errand did the Governor, via his chief of staff Paul Reagan, give Mark Warner?Â  Warner was tasked with scratching Sen. Puckett’s itch with respect to a judgeship for his daughter, Martha Puckett Ketron.Â  You see, because of the Virginia Senate’s anti-nepotism rules, Ketron could not be appointed to a Virginia judgeship while he served in the Senate, so he planned to resign directly ahead of when judicial appointments would have been considered, on the understanding that his daughter would get an appointment after he was no longer in the Senate.

That’s why Warner discussed with Puckett and his son a lifetime federal judicial appointment for Ketron, among other potential lucrative gigs Warner could arrange for her.Â  This was likely part of the effort of the Governor’s office, detailed in a leaked transcript of a voicemail left by them with Senator Puckett:

â€œWe just need you really, we need you for the rest of your term and beyond, but in the immediate future, we need you to help us get this Medicaid deal through and I think weâ€™ve got a way to do it.â€

Not having gotten through to Puckett on the appeal to his desire to protect the Medicaid expansion deal, the McAuliffe team dispatched Warner to do what he could to remove Puckett’s incentive to resign.

When this story broke, Warner refused to address his ethically-challenged behavior beyond saying that the discussion with the Puckett’s was merely “brainstorming” session. As we wrote at the time, that’s not brainstorming. That’s #BRIBESTORMING: laying out a buffet-table of corruption from which Puckett could choose to convince him to remain in the Senate.

Now, when the public is finally paying close attention and are demanding answers, Warner is betting that he can keep his head down long enough to squeak into re-election. He continues to refuse to take questions from the press, and to generally let his millions of dollars of TV advertising do all his talking for him. Luckily for all of us, Ed Gillespie has his own millions to make sure we hear about it:

As we enter the homestretch final week of the campaign, it’s time for the press to do their jobs and DEMAND that Mark Warner provide the voters answers about his conduct. This is what a free press is supposed to do, instead of being complicit in the cover-up. It shouldn’t be up to Ed Gillespie and his donors to expose this, and to tell the voters the details of an obvious instance of public corruption. Reporters: do your jobs, please.

[…] enmeshed in a political bribery scandal, Warner is nevertheless a clever campaigner with a massive budget for television ads to offset his […]

Steve, fast forward to next week when Sen. Warner is re-elected? Ok?

In spite of all the negatives the Liberal Republicans can muster, Sen. Warner still wins. Now, when that happens, what kind of statement does that make about Republican policy?

Just suppose everything out there that the Republican’s have created were true, and the majority of Virginia voters still prefer the Democrats? What a powerful message that should make to anyone with any common sense at all?

Just like last November, all the false accusations about McAuliffe, and in 2012, all the false poll info showing Romney ahead, we now have this “surge” of Limbaughloney against Sen. Warner.

And still, people vote for the Democrat, Still, they vote Democrat..

Steve, tell your buddies Bush 43′, Speaker HB 2313 Howell, and Safari Sen. Norment that I will be grinning while I wait in line to vote for Sen. Warner next Tuesday. Now it is my turn, “I” have the power.

Grinning, grinning just like they do when they throw the middle-class over a cliff.

This is how you get a powerful , corrupt, politician in DC. What Warner did is corrupt. If you don’t want corruption in DC then you need to vote him out of office. Look up Senators that have been punished by law enforcement. Hard to find. We need to do it at the voting booth.

More problematic for Warner is his raising the prospect of a job with CGI for Puckett’s daughter as that is a direct violation of HLOGA (The Honest Leadership and Open Government Act of 2007) passed by Democrats. In particular, that law makes it illegal for members of Congress to assist private citizens in securing employment in the private sector if there are partisan reasons involved. This grew out of Democrats anger with Tom DeLay and his K Street Project.

Can’t help wondering if there’s a roll for Jim Webb in this scenario.
http://www.washingtonpost.com/blogs/post-politics/post/jim-webb-health-care-law-represents-a-leadership-failure-for-obama/2012/04/18/gIQAIbKpQT_blog.html

Get real – do you think the reporters at the RTD are going to question Warner about this?