Mark Warner wants private sector minimum wage of $10.10, but pays his own interns $0.0

Virginia’s senior Senator, Mark Warner, favors the federal government arbitrarily determining the minimum amount of money private employers across the country must pay their hourly employees. The number that Warner and other Congressional Democrats have settled on is $10.10 per hour. Not $10 even, not $10.50, but the very precise-sounding $10.10, chosen deliberately to give the false impression that there is some sort of actual scientific basis for saying that exact amount is optimal for every labor market around the country.

But if $10.10 is good, wouldn’t $15.10 be better? Heck, why not $20.20? Because Democrats understand that drastic increases in the minimum wage actually hurt the poor and undereducated workers most—the very people they claim to want to help—by reducing employers’ ability to hire and retain low-skill labor.

The truth is there is no rational economic basis for the $10.10 number. Instead, President Obama himself justified it by calling the number “easy to remember–ten ten,” which is actually a fairly brazen admission that it is being sought as a means of giving low-information voters something to remember at the polls this November.

This is the same reason Mark Warner backs the universal $10.10 minimum wage, despite the fact that this arbitrary, politically-driven figure will cost hundreds of thousands of jobs. The Congressional Budget Office estimates over 500,000 jobs would be lost as a result of the policy favored by Warner. More rigorous independent private sector studies have found the number of jobs lost could be much higher, with one state-by-state study predicting job losses of between 731,000 and 1.9 million.

Ed Gillespie does not favor a Washington-mandated minimum wage, preferring instead to allow states and localities to set their own. This reflects the fact that economic conditions and costs of living vary widely across different parts of the country. So, while a $10.10 minimum wage might not cause much upheaval in the District of Columbia (causing as few as 197 lost jobs), it could cost 45,000 jobs across the Potomac here in Virginia. Hence, these different localities should be free to address the issue as they see fit, instead of dealing with a federally mandated, one-size-fits-all approach.

Further, as Gillespie revealed in a talk he gave to supporters in Virginia Beach, any policy on the minimum wage must take into account that the jobs implicated are often the most entry-level kind, where young people benefit from numerous intangibles, not just the wage. 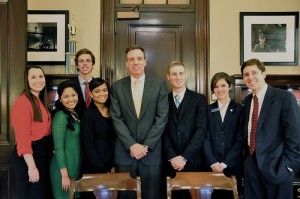 Mark Warner and his allies wasted no time in saying Gillespie’s statement of the obvious was “insensitive” and “out of touch” and “demeaning.” [As an aside, it’s interesting to note that with their first broadside of the summer, the Warner campaign completely missed the target and succeeded in riling up only the most reliable elements of the left-wing noise machine.]

This criticism is particularly rich considering that Warner himself regularly employs people for far less than the minimum wage in Washington, in the form of young, college-age interns earning $0.0 per hour. As The Atlantic detailed last year, in an article entitled “How the Senate Exploits Unpaid Interns,” Mark Warner is among those Senators (mostly Democrats) who are apparently “insensitive” to and “out of touch” with the reality that their interns have a very high cost of living in D.C. So this means that not only do these workers not receive equal pay for the work they do, it also means essentially that only those who have independent means to live (i.e., those with well-off parents) even have the luxury to apply. The article reads,

80 percent of Dems require volunteer participation — peculiar and troubling for a party that elsewhere signals its commitment to fair pay, economic inequality, and workplace welfare.

Those Senators who don’t pay their interns will undoubtedly make the entirely valid argument that if they had to pay the interns then there wouldn’t be as many opportunities for young people to learn in these kinds of roles. Yet a majority of those mostly Democrat Senators fail to see how that same logic works in the private sector, where a huge, Washington-driven increase in the minimum wage would destroy jobs. These Senators would also doubtless point to the fact that the interns are being compensated in other ways through their exposure to the job and the overall learning experience…all very true, which is exactly Ed Gillespie’s point in warning about not eliminating the kinds of jobs where young people learn about work.

The key difference between Ed Gillespie’s real world view and Mark Warner’s condescending hypocrisy? Ed Gillespie cares about Virginia and other states being able to make the decision that’s right for them. Mark Warner cares about scoring cheap political points (and some free labor to boot), while advancing President Obama’s and Harry Reid’s electoral agenda—without a second thought for the jobs of 45,000 hard working Virginians.

So, who, exactly, is out of touch here?

Bruce, that’s the wrong question. The right question is which senators, like Warner, used unpaid/underpaid staff themselves while trying to foist a different set of rules on the private sector. I’m sure there are some Republicans equally guilty of the hypocrisy.

I think I’d be relatively safe with saying 100 as an answer to your “right” question. And pretty close to 435 in the House and 1 in the White House no matter what political party. RPV had unpaid interns when Gillespie was the big cheese there, too. Oops.

Hey, what happened to the talking cat that you had here? Looks like y’all completely whitewashed it out of existence here on the website.

Warner did this, and attacked Gillespie as “out of touch” for suggesting one of the reasons for not adopting a blanket 39% increase is that there’s more to a starter job than money…the same argument employers of unpaid interns make. Care to explain how that’s a backfire?

Sure. The proposed minimum rate increase isn’t an instant jump to $10.10. It steps up to that.over multiple years. You fail to mention that in your article.

Next, Warner uses the argument of “They refuse to let it come to a vote” that Republicans are saying is so wrong of the Senate. The reason that the Republicans don’t want a vote on it in the House? It could pass.

A serious question. The last time the minimum wage was raised, I’m sure that there studies saying jobs would be lost. How good did those studies’ projections come to the true numbers?

Finally, I’ll repeat my question from above. Hey, what happened to the talking cat that you had here? Looks like y’all completely whitewashed it out of existence here on the website.

Labor, like any other commodity, is only worth what someone is willing to pay for it (so long as the worker attracted to a job is willing to voluntarily accept the wage at which he is hired).

The Minimum Wage is an inflation generator that serves to increase tax revenue. As wages go up, prices must eventually follow bringing the equalibrium back to the same economic situation. The cycle then begins again.

With his net worth he could afford to pay them out of his pocket, to be ‘fair’, that is.