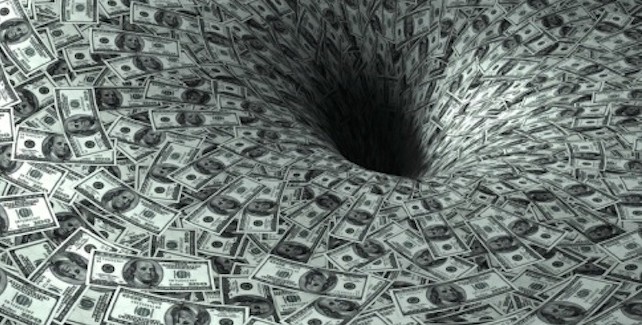 It has long been known that the Washington Metropolitan Area Transit Authority, which operates the Washington region’s commuter rail and bus systems, has unfunded retirement-benefit costs approaching $3 billion (on top of its multibillion-dollar unfunded maintenance backlog). While the Commonwealth of Virginia is not legally obligated to make good Virginia’s share WMATA’s shortfalls, as a practical matter it may have to eventually or risk — again — Metro collapsing into fiscal insolvency.

What I have not reported in past posts is the magnitude of that liability in relation to the size of the enterprise. A new Moody’s Investors Service report has the answer: Adjusted net pension liabilities plus adjusted net “other” retirement benefits (primarily health care) amount to 305% of WMATA revenues. For the uninitiated, that’s a lot. It’s the highest ratio of the nation’s ten largest mass transit agencies.

Another cause for concern. According to Moody’s, “WMATA has greater than a 10% one-year probability of experiencing pension investment losses that amount to 25% or more of its revenues, a threshold known as our “pension asset shock indicator.”

Despite the vulnerabilities, Moody’s does give WMATA an “A2 positive” investment rating.

The report, “Pensions and retiree healthcare challenge some of the largest mass transit enterprises,” covers only the nation’s ten largest transit operations. WMATA is hardly unique. The problem of unfunded liabilities appears to be endemic among big transit systems. The report does not tell us if underfunding is typical of all transit systems. We are left to guess about the condition of Virginia’s other 28 mass transit operations.

Hopefully, the smaller transit agencies have demonstrated more responsibility than WMATA about allowing massive unfunded retirement liabilities to accumulate. The data is (or should be) public information, but no one knows how exposed Virginia governments are because no one has checked.