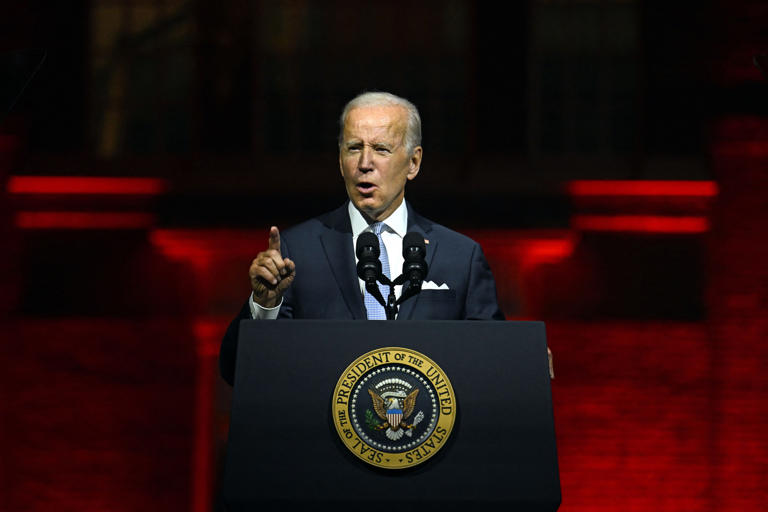 Joe Biden’s controversial, prime-time “Soul of the Nation” speech this past week has aroused much commentary from the chattering class – some praising Joe’s forthright denunciation of dangerous Republicans, and others denouncing his mean-spirited condemnation of 70+ million Americans who voted for Donald Trump in the 2020 election. For several days air-waves and print-media have been crowded with reporters and analysts declaiming about “the speech,” with little time given to much else.

Was this the “real” Joe Biden – standing before a dark-red, Hitlerian-style backdrop that included two military figures? Had he finally emerged? And did he really believe all that stuff about Donald Trump’s Make America Great Again (MAGA) followers being an existential danger to the nation?

What a wonderful time to be a reporter or political commentator. Aren’t times like this the reason they got into the business? (As Bill Murray famously proclaimed: “This is the greatest day in North Star history!”)

As usual though, when blockbuster events come out of nowhere it’s good to look behind the curtain to understand what’s really going on. In this case, what else is being reported and proclaimed while most media voices – on-air or in print – are screaming about “da speech!?” Were there any reports about tens of thousands of illegals walking across our borders every day?” What about inflation? Gas prices? Energy-grid failures in some states that have gone totally “green?” Increased crime? Failure to prosecute dangerous criminals? How about military recruitment goals not being reached? Anything? Hello….?

Nope. Not much being said about those topics, is there? Those are the real problems the country is facing today, but all we’re hearing (and reading) about is how Good Old Joe got transmogrified into Der Führer, via some radical words delivered in a movie-set designed by Dr. Goebbels for Triumph of the Will. (Where is Leni Riefenstahl1 when you really need her?)

What Americans saw last Thursday was another offering by the Masters of Diversion. Democrats have always favored diversion, but have doubled-down on it since the advent of Donald Trump. Last month they staged a super-diversion by sending the FBI in to perform an armed raid of Mr. Trump’s Mar-a-Lago home. They said it was to retrieve some documents that belonged in the National Archives. Or was it to retrieve some top-secret nuclear weapons documents that Mr. Trump had stolen? Could they have been carried out in Mrs. Trump’s underwear drawer? (Or were her drawers the real object of the raid?)

Whatever the facts behind the document-raid might have been, the result has been diversion of our attention away from all of the country’s ongoing problems (see above). It is the Mother of All Diversions that promises to last right up to the 2024 presidential election. Dems have hit pay-dirt with this one. It not only diverts the public’s attention, but also reinforces Democrats’ insistence that Donald Trump is far too dangerous to be allowed back in the White House. After all, where was he planning to peddle those nuclear secrets? (Could he actually be planning to make an A-bomb?)

But returning to the Soul of the Nation speech – what else was going on with such an angry, radical delivery? Did Joe Biden (or his inner circle) really think that kind of talk would boost his approval numbers, or “unite” the country’s people? Surely even the yellowest Yellow Dog Democrat wouldn’t be that far round the bend. Then why do it?

My theory – and I’m sticking to it – is that Joe Biden is being set up by his own party as the Real Danger to the country. Even Democrats are now saying that he shouldn’t run in ’24. If he does, they know he’ll certainly lose. So if they want to retain power, he’s got to go.

How can they make that happen? Ask Joe not to run? But half the time Good Old Joe doesn’t seem to know where he is, so that approach seems doubtful. Then how about appealing to Dr. Jill Biden? As a medical pro, she should be able to convince Joe not to run. Of course, that would mean giving up the whole First Lady gig, which certainly has its perks. From here that doesn’t look very likely.

No, it looks like the only way to get Joe out of the ring in ‘24 is to pose him as such a threat to the country that he simply must be removed before his term ends. To that end, the Soul of the Nation speech can be regarded as just the opening salvo. Other speeches and actions might follow – perhaps ordering the arrest and prosecution of Donald Trump, or the release of criminal prisoners in all 50 states.

Naturally, Joe Biden’s complete change into Radical Joe might help Republican Congressional candidates in the midterms. But that could help Democrats to achieve their removal of Joe. A GOP-controlled House of Representatives would have no problem passing Articles of Impeachment. And a Republican Senate – aided by Democrats happy to follow the GOP’s lead – might actually vote to remove Biden from office.

Of course, if that scenario actually plays out, Democrats and the entire country would be left with Kamala Harris sitting in the Oval Office – a cure that both parties might regard as worse than the disease. But Democrats would be playing the long game there. Posing themselves as the only party able to save the country, they would intend to replace President Harris with an attractive new candidate to run against Donald Trump, Mike Pence, or whoever else the GOP candidate might be.

Some analysts say Democrats’ new champion might be Michelle Obama, or even Hillary Clinton. Others think it will be a new “dark horse” whose unknown status will make him (or her) attractive to enough voters to produce a win. I lean toward the dark horse theory, but my crystal ball is busted, and it’s anyone’s guess. What I am sure about is Democrats’ need to dump Herr Biden. Doing it will be the next act of the Masters of Diversion. (“Pay no attention to that little man behind the curtain.”)

If the speech is a diversionary tactic, and we are all talking about it, then it is working.

Trafalgar did a survey which said that 80 plus percent of Republicans and 62 percent of independents said this hideous spectacle was dangerously ramping up the boiling kettle. 71 percent of Dimocraps liked it.. or rather found it acceptable. So that says that it was focus tested and designed to get out his useful idiot voters.

Democrats are not just being The Masters of Diversion but the Masters of the Plantation.
This summer it was uncovered that Biden’s and the Democrats plan of free flow labor has allowed companies like Hyundai to employ Central American Migrant Children as young as 12 to work in a Alabama manufacturing plant. I find it interesting that many Hyundai Dealers to PPP loans that were forgiven by Joe Biden even when they were able to sell all models.
Should the legal hard working American
employer & employee have to pay the college debt of American college students sitting on the employment sidelines when the Biden Administration circumnavigates the “rule of law” so that the “rich keep getting richer & the poor keep getting poorer”
Americans should stand up to these “extremist” Democrats and “push back, get in their face and let them know that they are not welcomed”
Manufacture American
Employ American
Buy American
Be American

“This summer it was uncovered that Biden’s and the Democrats plan of free flow labor has allowed companies like Hyundai to employ Central American Migrant Children as young as 12 to work in a Alabama manufacturing plant.”

It has nothing to do with Biden. It has everything to do with capitalism, corporate greed and us being unwilling to invest in the resources to stop this stuff and prosecute the violators.

It is now reported thar Biden knew of the FBI activities in Mar-a-logo in May 2020. Whether he knew of the raid is tbd but he cannot deny knowledge of what is the weaponization of federal agencies to attack Trump.

I saw the IRS attack virtually every conservative group during the Lois Lerner era. These weren’t high level politicians just normal American citizens. I would prefer that comey and McCabe serve prison time because a weaponized fbi against a sitting president.

Victor Davis Hanson wrote a good piece about a week ago with the essential theme that said… If Trump is such a fascist why was he so bad at getting the government to do his bidding? His own crappy DOJ led by Comey and Barr kept up with the Russia hoax crap… it tried to impeach him with that stupid phone call and what’s his name the little schmuck soldier who was there to protect Bribem’s interest in Ukraine.. Did he roll out the troops to suppress the Black Soros funded riots.. ?
But there you have Team Blue… using the full force of the gumment ABC spying agencies on him… attempting to prosecute him every chance they get… And now..
Dopey Joe putting on his black suit and giving a pure theater speech complete with creepy background and Marines to enforce the idea that if you get out of line well…
JOE and the CESSPOOL have F-15s where you only have AR 15s… (Well the Taliban only had AKs…and they won Joe)
Calling his enemies dangers to his Cesspool…
Using their allies in Tech to censor… deplatform.. Etc
Proud Democrat Trolls… You do know that National Socialism entailed close arrangements with the Nazi party and industry right? Krupps was indistinguishable from the government… As is Amazon Microsoft Google now.. Facebook helps the FBIden remove ‘Russian Disinformation” like the Hunter Laptop… Helped you win that election didn’t it?
So if you want to blather about fascism, Proud Democrats… Look at your own party you useful idiots…
Pelosi/Obama/Clinton/Bribem and Amazon are not your friends dumbasses.

In current legal documents posted online, Biden not only knew about the raid but authorized it.