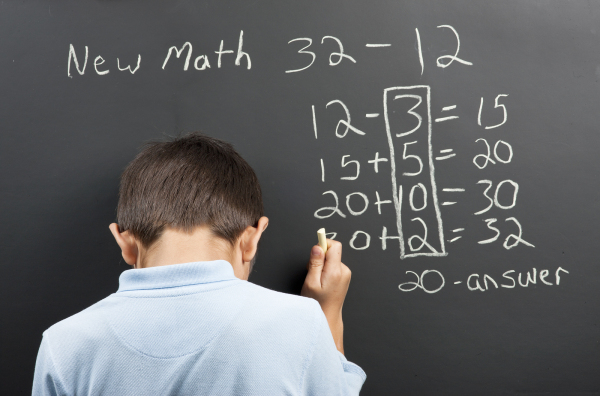 I saw a short item from a writer named Michael Howard, who related his experiences teaching junior high math in Austin, Texas. Mr. Howard taught there for a half-year, but his contract was not renewed because of “irreconcilable differences” between him and the school system. He said student self-esteem was such an obsession in Austin that students who had trouble memorizing the multiplication tables were given a small card containing those facts (through 9×9). The card could be carried and referenced at any time, including during tests.

Mr. Howard saw that this “crutch” prevented students from developing the skills needed to become mathematically functional. By always using the card they had little prospect of gaining the facility with multiplication facts one needs to master fractions, algebra, and successively higher branches of mathematics. Mr. Howard cited this misguided sensitivity as one of the reasons he lost confidence in the public school system. (No doubt they were glad to see the back of him.)

As a product of public schools in the “pre-enlightened” era, I can only say that those Austin students can thank their lucky stars that they didn’t have to endure the self-esteem-destroying horror of my own mathematics education in Allentown, PA – circa 1952. Our teacher, Miss Schenk, was, shall we say, “neo-Hitlerian” in her teaching style. A harridan of uncertain age, fierce temper, and tiger-like stealth, Fräulein Schenk might spring at any moment, with heart-stopping suddenness, upon an unsuspecting student whose attention was wandering. Without warning she would crash her ruler – carried like a Nazi swagger-stick – down upon the desk of an evil-doer. She splintered at least twenty of them during the term. (Rulers, that is – not desks.)

But the cruelest part of her modus operandi fascisti was her twisted use of mathematical material as punishment. When a student misbehaved in some way, his/her name was entered on a section of the blackboard reserved for the names of miscreants. Having one’s name posted there indicated a requirement to write and hand in the multiplication tables (through 12×12) – repeated tenfold. (Talk about cruel and unusual punishment!)

Additional infractions added tics to one’s name – each tic requiring a repetition of the full multiplication-tables assignment. (Some students had dozens of additional tics.) As students handed in their assignments, tics were erased. Truants periodically received fierce tongue-lashings to motivate completion of their assignments. Bales of paper were used up in that pre-environmental era. Today, that class would be raided by the Eco-cops.

Some kids must have written the tables 100s of times. Naturally, they could recite them in their sleep. One can only imagine the rage this must have produced in some of those 13-year-olds sitting in the back of the class, who had repeated the 5th grade several times. Luckily, we now understand that such kids should be pushed through the system and out the door without over-concern for whether they actually know anything. Too late for me, educators realized that self-esteem is far more important than mere knowledge.

Today, a teacher like Miss Schenk would surely be arrested for student-abuse. She would be frog-marched from the classroom in handcuffs by armed police to do hard time, as her liberated captives celebrated and leapt gleefully to erase their names (and tics) from the blackboard. Choruses of “Free at Last! Free at Last!” would ring through the hallways.

Sixty-five years on, I often think about her methods and reflect on the damage she must have done. True, many of her students – I among them – went on to mathematical and scientific careers. We sailed through the high-tech era well “ahead of the curve” – coping easily with complex economic and mathematical matters. We never endured making incorrect measurements, being unable to balance the checkbook, or being shortchanged at stores. Multiplication facts sprang instantly to mind when we needed them.

Even those “holdbacks” in the rear of das Fräulein’s class – guys who later ran gas stations or drove beer trucks – turned out to be “very sharp” with numbers. (No doubt, however, they still suffered from the punitive tables-writing they had to endure.)

But there was a Dark Side. In years ahead, many of us who survived Miss Schenk’s classes insensitively twitted wooly-headed clerks who – despite high self-esteem – wouldn’t be able to make change to save their lives, if the cash register didn’t calculate it. Car salesmen couldn’t confuse us, and we had no pity on them. How they must have hated a customer who could do arithmetic in his head. Ditto for mortgage brokers, investment counselors, and bankers.

Tax returns held no terrors – only boredom. We laughed at lotteries that offered 1-in-125,000,000 odds. And we refused to borrow on credit cards with 18% interest rates. Indeed, we probably undermined the economy by preventing some people from making an easy buck. I am ashamed to realize it today.

Do the positives offset the Dark Side? Who can say? But I still shudder at the tyranny, the cruelty, and the uncaring insistence that we master those math facts. There was no appeal – no sensitive official to deliver us! In those days we didn’t know enough to skip class, torch trash bins, organize marches on the school board, and demand resignations. It was a terrible ordeal. For years I had a recurring nightmare in which I found my name on the malefactors’ blackboard with scores of tics beside it.

Yet this is not the full measure of math-abuse. My entire life has been cursed with the perverse ability to recognize incorrect calculations, and an uncontrollable urge to call for their correction. (I hate myself for this.) The church treasurer groans when he sees me at congregational meetings. Business associates fumed when I critiqued the numbers in their presentations. (The guy who knows when a calculation is wrong, and says so, is never popular.) I still worry about a midnight-raid by Department of Education “math-abuse agents” who have finally caught up with me. I know it’s just a matter of time.

I sometimes wonder if I might have turned out better-adjusted, and a better citizen, if Fräulein Schenk had been stopped before she ruined me and so many others by making us mathematically capable. Wouldn’t it have been better to be stupid and fit in? Today an entire wing at the mental hospital is populated by math-adept people who finally cracked up under the strain of trying to fit into a math-ignorant society. These folks used to worry about the size of the national debt and funding for government programs. It’s not hard to see what their absence has done to the country. (Trillion-schmillion, who cares…)

Thank heavens, school systems are now run by people who stink at math but who understand the emotional and social damage that mathematical acuity can produce. Their heroic work in dumbing-down math education is a mission of mercy for millions. Many graduates today might not know what 7×9 equals, but their self-esteem is secure and their sensitivity to other ignorant people is a marvel to behold. What a blessing to society!

They have no idea how lucky they are…

The same could be said about the proper use of the English language. Just replace “the English language, grammar, punctuation, and spelling” for “Mathematics, addition and calculations.” Substitute Sister Agnes for Fraulein Schenk, and you will know how I view the haphazard use of our language.

Because of Sister Agnes, I am the only person to use complete words, along with proper punctuation and grammar in text messages. That ruler pops into my mind anytime I even contemplate writing LOL, which is what I did when I read this article.

I worked for SAIC for 9 years – at the Strategic Assessment Center then for a gentleman named Brian Sharkey in support of RDEC.

Feelings are way more important than facts right now. Math should be more about how it feels than what it is.

Ha! Ha! What a great visual of the classroom and curriculum of yore! I was there, but never experienced ruler-cracking. There were “checks” and “demerits” to be had, but no rulers. Hey, I note that you minored in German. The ghost of Fraulein Schenk, eh? Anyway … a humorous read, if the current situation weren’t so sad and troubling.