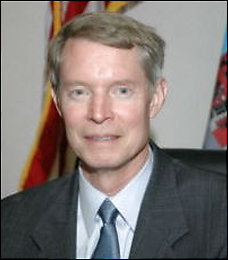 The first Republican has entered the race to replace retiring Senator Chuck Colgan (D-Prince William), Mayor of Manassas Harry J. “Hal” Parrish II.[read_more] A veteran and owner of Manassas Ice and Fuel, Parrish is 64 and a life long resident of Manassas.  His father, the late Harry J. Parrish, spent 30 years as Manassas Mayor and Councilman.

On his Senate bid Parrish said,

“Service runs deep in my family, and for whatever reason, genetics, history or otherwise, I’ve enjoyed the same thing, sort of in my blood, I guess.”

Parrish’s top priorities will be improving education and transportation.

Three democrats have entered the race, a race that could tip the balance in the Virginia senate which is currently controlled by the Republicans 21-19. The three democrats in the race are Delegate Michael Futrell (D-Prince William), Atif Qarni and Jeremy McPike.

Wh y is it that Republican hide threir affiliation on literature. you really have to dig deep to see that it is a Republican brochure filling your mailbox. are you ashamed to put Republican on your brochure? You should be.there are more poor fair minded voters than upper class Republicans. You should never win