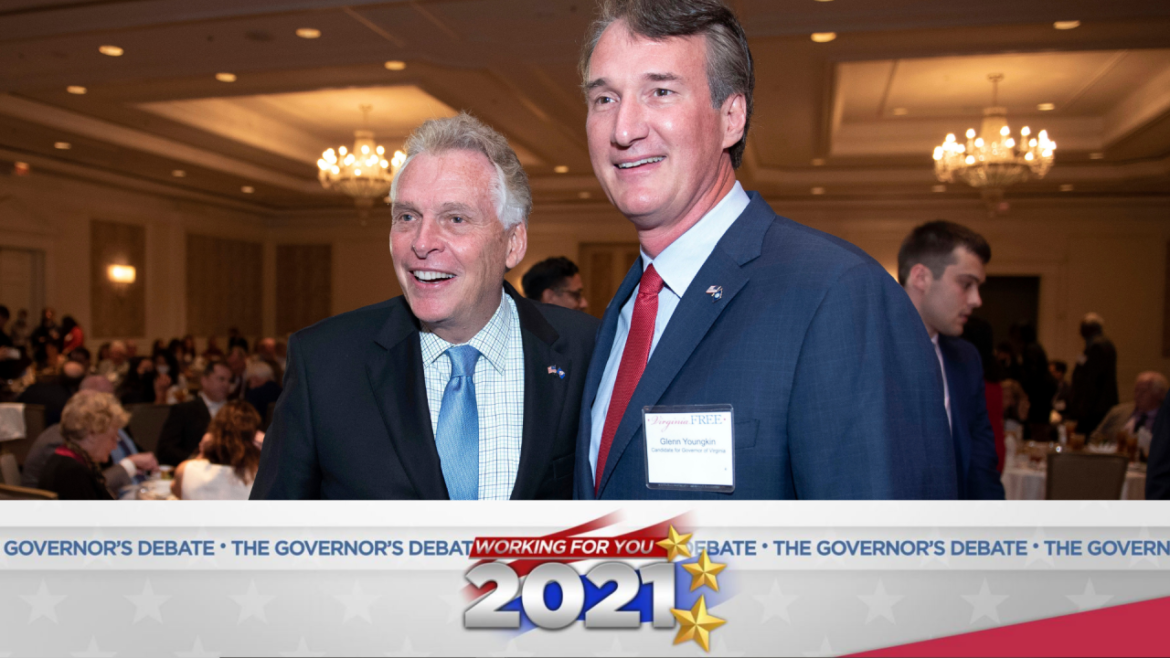 McAuliffe and Youngkin Square Off in First Debate

Tonight was the first debate between gubernatorial candidates Terry McAuliffe and Glenn Youngkin.   It was hosted by the Appalachian School of Law in Grundy, VA.

Susan Page, a fixture among Washington, DC, journalists, moderated the hour-long debate.  She was joined by panelists Candace Burns (Emmy award-winning journalist and CBS6 News anchor) and Dr. Bob Holsworth (Founding Director of the Center for Public Policy and the Wilder School of Government and Public Affairs at Virginia Commonwealth University).

Compare this rapid-fire pace with the famous debates between Abraham Lincoln and Stephen Douglas, known as the Great Debates of 1858.  There were seven debates, each of them three hours long.  One candidate spoke for 60 minutes.  His opponent had 90 minutes to respond.  Then the first candidate wrapped up for 30 minutes.  Are today’s candidates capable of such a demanding timeframe?  Is today’s audience capable of maintaining attention?

I’ll leave it to other commentators to comb through the transcript and parse dialogue, but will offer some observations that stood out to me.

Terry McAuliffe did not disappoint as a carnival barker.  He’s a glib, hyperbolic, bombastic political salesman.  He also has a dagger-like mean streak, which sets him apart from Glenn Youngkin. Several times McAuliffe declared, “three studies have shown,”  “three independent analyses show,”  “three recent reports show” without ever naming the authors; he was just trying to sound authoritative.  He ridiculed Glenn Youngkin for promoting Public Service Announcements as a way to encourage people to get the COVID-19 shot.  McAuliffe’s stance is to mandate the shots, individual choice be damned.

On the subject of abortion, McAuliffe sounds more concerned about whether or not Amazon, Google and Facebook employees will come to Virginia if a Texas-style abortion law is enacted, than he is with protecting the life of the unborn.  As for Youngkin, he seemed uncomfortable talking about the Texas law and said he would not sign such a law as Governor of Virginia.

On the topic of qualified immunity for police officers, McAuliffe backtracked from an earlier position and said he would not end qualified immunity, a position Youngkin takes.   [Nothing like an imminent election to focus a candidate.]

Glenn Youngkin has proposed a comprehensive economic plan, which Terry McAuliffe completely dismissed citing the Washington Post as his authority with this summation:  “His plan would run our economy into a ditch.”  [Terry must be thankful that he doesn’t have to abide by the format of the Lincoln-Douglas debates.]

There was a question about Confederate statues.  Glenn Youngkin reminded the audience that Terry McAuliffe, as Governor, said the Lee and Jackson statues should remain in place, a position McAuliffe since has recanted.  Youngkin believes such statues should be placed somewhere in view, like a museum or battlefield, and not erased from history, lest we be doomed to repeat the mistakes of the past.

When the subject of election integrity came up, Glenn Youngkin declared that he didn’t agree with Donald Trump that Democrats will cheat in Virginia’s gubernatorial election.  “We’re going to have a clean and fair election,” prophesied Youngkin. Several times, Terry McAuliffe called Glenn Youngkin a “Trump wanna be.”

Each candidate was asked if he would pledge to recognize his opponent as the legitimate Governor if his opponent wins the election.  Youngkin affirmed, “Yes, but I don’t expect that to happen.”  Not to be outdone, McAuliffe proclaimed, “Sure. Absolutely.  But his Day 1 plan is to unleash COVID!”

The next debate is September 28, hosted by the Northern Virginia Chamber of Commerce.

‘Glenn Youngkin has proposed a comprehensive economic plan, which Terry McAuliffe completely dismissed citing the Washington Post as his authority with this summation: “His plan would run our economy into a ditch.” [Terry must be thankful that he doesn’t have to abide by the format of the Lincoln-Douglas debates.]”

Of course, there was a bit more to it:

“Glenn Youngkin’s aspiration to eliminate the state income tax would not only drive Virginia’s economy into a ditch but would decimate funding for public schools and put Virginia’s economy squarely in the ditch Glenn loves to talk about,” said Renzo Olivari, a McAuliffe spokesperson. “His Trumpian plans would blow a massive hole in our budget and lead to drastic cuts to public education and police.”

And, of course, McCauliffe is absolutely right. Eliminating state income taxes would be insane.
‘

“but I have no faith in a free and fair election in this or any other state. The democrat fraud machinery was in full view in California last Tuesday. It will be the same here.” Oh, good God………….

So far you have posted 3 comments that mark you as a democrat. Tough to have an adult conversation with you folks but keep trying you might make an intelligent post, some day.

I am a Democrat, yes. Left the GOP a long time ago. And it is difficult to have an intelligent conversation who spew this nonsense: “but I have no faith in a free and fair election in this or any other state. The democrat fraud machinery was in full view in California last Tuesday. It will be the same here.”

OK, you keep believing that the democrats did not engage in massive vote thefts in 2020 and in California. It doesn’t change anything. The evidence is s=lowly coming to light in AZ and GA. You might look up Mollie Hemingway’s new book on the election theft. Here’s a link for you. Be warned, your whole house of cards is about to come tumbling down.

Get your head out of the hole in the ground, Ostrich. Your refusal to acknowledge what is obvious to everyone, including willfully blind Democrats, does not mean it didn’t happen. Why doesn’t the DNC call for a national forensic audit, state by state to prove, once and for all, that Democrats won?? Because YOU know they didn’t win. There is so much evidence of fraud in AZ, PA, NV, WI, MI, and GA that the world knows Trump kicked Biden’s demented butt on November 3. VIDEOS of poll workers pulling ballots out from under tables (GA) and feeding them into the Dominion machines multiple times isn’t enough? How about chasing Republican poll watchers out (MI) and taping cardboard over windows isn’t enough? How about over 100K “lost ballots in AZ? You and yours are cheaters hiding behind your “by any means necessary” motto.

Can it be that, after that debate (non) performance, even fewer people like McAulliffe than before? Is that even possible?

our next Governor. Youngkin is an idiot

Did you even watch the debate? Youngkin clearly handed Macauliffe’s Biden* to him, but at the end of the day McAuliffe has the raw numbers. Youngkin was good, but at the end of the day he won’t speak forcefully enough to fire up the base while drawing teh disaffected Democrats.
The Dems spent the last decade importing voters, between expanding DC’s reach to bringning in foregners who will cast teh votes that Americans won’t. The GOP has annual fights over primary vs. caucus that embitters half of the base.
And now I get a front row seat of watching Dems do to what they did to my home state of NJ decades ago

Youngkin killed it. Terry looked …McAwful 🙂 Even a poll of Democrats shows Youngkin won, 78 to 22% McAwful sidestepped the issue of whether he would get rid of right to work. Im sure he will if elected and then, Virginia joins the Blue states with heavy pension debt. Very bad for Virginia if McAwful wins!

right to work (for less) should go. VA is the worst state in the country for workers.

*sigh* Meet your next Governor of Virginia. The debate between McAuliffe & Youngkin summed up the two parties in The Old Dominion. Youngkin won the battle but lost the war. He outdebated McAuliffe (who avoided risking an outburst by not taking any of Youngkin’s bait and keeping his responses bland) & won the debate, but didn’t punch hard enough to move the needle. The debate felt like a microcosm of Republican politics in Virginia – Mcauliffe is running a campaign to become Governor, while Youngkin is running a campaign to put “Former Gubernatorial Candidate” on his resume.

Youngkin looked fit and ready to lead. He came across as competent and solid. McAwfull, was, well, awful. I sincerely hope that Youngkin wins but I have no faith in a free and fair election in this or any other state. The democrat fraud machinery was in full view in California last Tuesday. It will be the same here.