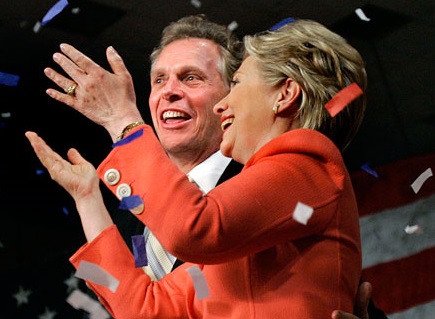 Governor Terry McAuliffe earlier today issued an executive order restoring the voting rights of roughly 206,000 convicted felons in Virginia.  This is an unprecedented move in Virginia’s long history, and despite the thin veil of rhetoric about fairness and justice (euphemistically referring to these ex-cons as “our fellow Virginians who work, raise families and pay taxes in every corner of our Commonwealth”), one need not be Larry Sabato to see the true motivation: electoral victory for Democrats.

In a statement issued shortly after the executive order was issued, House Speaker Bill Howell (R-Stafford) had this to say about the Governor’s actions:

I am stunned yet not at all surprised by the Governor’s action.  I am stunned at his broad and unprecedented view of executive power, which directly contradicts how past Governors have interpreted their clemency powers, and I am stunned at his willingness to restore the rights of the most heinous criminals without batting an eye.  Yet, I am not surprised by the lengths to which he is willing to go to deliver Virginia to Hillary Clinton in November.

It is hard to describe how transparent the Governor’s motives are. The singular purpose of Terry McAuliffe’s governorship is to elect Hillary Clinton President of the United States.  This office has always been a stepping stone to a job in Hillary Clinton’s cabinet.  The one-time nature of this action is proof positive of the Governor’s political motivations.  Instead of adopting a clear policy that can be applied equitably, he is changing the rules in the middle of the 2016 election to ensure Hillary Clinton’s victory.

Previously, Virginia Governors have all considered restoration of voting rights on a case-by-case basis, wherein the Governor and executive branch staff vet restoration candidates on the basis of whether they have paid their debt to society and their victims, and prepare to be willing to function as productive citizens of the Commonwealth entitled to all the privileges that entails.  Never before has a Virginia Governor exercised his constitutional authority to restore voting rights en masse.

Indeed, counsel to then-Governor Tim Kaine, a passionate advocate for voting rights restoration, advised Kaine that “a blanket order restoring the voting rights of everyone would be a rewrite of the law rather than a contemplated use of the executive clemency powers.”

The Governor’s policy applies to criminals who have committed even the most heinous violent crimes including murder, rape, child rape, and kidnapping.  Under this Governor’s policy, violent criminals will be treated the same as lifelong law-abiding citizens.  Not only will these criminals have the right to vote, but they will also be serving on our juries. By using no discretion in this process, the Governor is undermining the strength of the criminal justice system and the sanctity of our civil rights.

Howell and other Republican leaders are currently contemplating potential legal and/or legislative challenges to this brazen act by this most partisan, lawless Governor in the Commonwealth’s history.  Stay tuned.