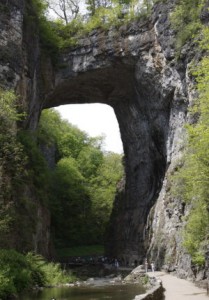 Normally when a man tries to sell you a bridge you just laugh at him and walk away. But in this case, Virginia fell for it, and in the process ensured preservation of one of the Commonwealth’s greatest treasures.

In a great example of public-private cooperation begun under the McDonnell administration, various Virginia agencies teamed with private philanthropists to trade a package of cash and tax credits to acquire Virginia’s Natural Bridge, which will now become a Virginia State Park. From the RTD:

Angelo Puglisi donated the 215-foot limestone arch, valued at $21 million, to the newly formed Virginia Conservation Legacy Fund and received conservation tax credits estimated to be worth about $7 million along with $8.6 million in cash for the balance of his Natural Bridge holdings that encompass more than 1,500 mostly forested acres.

“It is something that needs to be preserved as Mount Vernon and Monticello,” Puglisi said. I’m afraid we are losing the history of our country.”

Though it has been managed quite nicely in private hands for hundreds of years, the work of several philanthropic and preservationist private charities has ensured that the property will always remain open, available, and cherished for its unique and historic nature. The complicated deal involved 35 separate tracts of land, and involvement of numerous local and state agencies. The bulk of the 1500 acres will go to the state within a couple of years, while the co-located hotel, shops, and cottages will remain in private hands, ensuring visitors will still be able to expect private-sector amenities and service.

Well done to those involved, especially the private charities and the McDonnell and McAuliffe administrations!