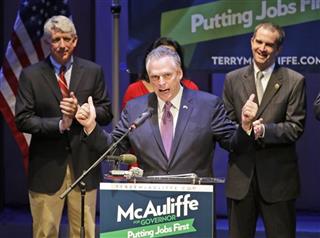 As we all know, last week Gov. Terry McAuliffe issued an executive order which purports to immediately re-enfranchise all persons convicted of felonies who have completed parole.  The order makes no mention of having to complete court-ordered restitution to the victims of crimes before voting rights will be restored and does not distinguish between violent and non-violent offenders.

However, Governor McAuliffe now has apparently run afoul of Virginia Constitution Article V, Section 12 which requires him to report to the General Assembly the particulars of every case where “political disabilities consequent upon conviction for offenses” have been removed.  http://hodcap.state.va.us/publications/Constitution-01-13.pdf

This Governor McAuliffe cannot do.  Not even AE Dick Howard, University of Virginia legal scholar and chief draftsman of the state constitution when it was revamped in 1971, would assert the Governor could satisfy this requirement by submitting the names of all felons who were having their voting rights restored without explaining why each person merited the restoration of his or her voting rights on a particularized basis.

Which brings us to the curious case of AE Dick Howard.   He supports Governor McAuliffe’s order as being lawful.  Howard also has stated that the provision regarding disenfranchising felons “is really the last prop of white supremacy.”  https://www.washingtonpost.com/news/post-nation/wp/2016/04/22/about-200000-convicted-felons-in-virginia-will-now-have-the-right-to-vote-in-november/

Did Howard forget that he included this provision in the Virginia Constitution?  Where was AE Dick Howard in 1971 stating that he was forced to include a provision that was morally repugnant and a vestige of Jim Crow laws?  I could find no mention of him making such an assertion during that time.   I have no doubt that Howard wasn’t free to completely rewrite the Virginia Constitution from scratch but one would think he would have publicly strenuously objected to the inclusion of provisions which he believed were blatantly racist.

Perhaps he can reply here and let us know what objections he made in 1971.

It helps to read the Constitution carefully and quote it in full, rather than quote it partially in misleading ways. Unlike the 3 other powers listed in Article V, section 12, the Governor is not required to report the particulars of political disabilities removed. (4 things listed in paragraph 1, only 3 in paragraph 2.) That’s the end of your argument right there.

To be clear, I think both sides can fairly be argued here. But the anti-McAuliffe side needs to do a lot better than what you’ve done.

So the Governor wants to give citizen convicted felons { who served their time } the oppurtunity to vote for someone to represent them and their issues , OK so far.
Republicans passed the voter I.D. law { as should have been } to keep illegal aliens from voting { potential Democrat } yet allowed these illegal aliens to operate illegal bussiness illegally employing others and not one time did these self proclaimed conservatives allowed Virginia Licensed Contractors to conspire with these illegal aliens to comit felonies.
If Republicans willfully chose to not prosecute felons , what the hell is all the cry baby fuss about ?
Is the little baby afaid of losing his job ? Welcome to the line that you Virginia Republicans created http//:watchdog.org/202012/subcontractors-shadow-economy- At least Democrat AG Herring and Governor McAuliffe understand how their predecessors refused to enforce Virginia law.

Nobody cares about your one-trick pony topic is a thread that’s not about it.

Bruce , One day we will be at the same event and I will proudly indroduce myself to you while you are lying on the ground , coun’t on it.
Nobody cares? McAuliffe , Northrom and Herring do check the policy changes. Now you, McDonnell, and Cuccinelli stand with the rapist child molesters and drug dealers .

A threat by an anonymous one-trick pony. Consider me not scared one damn bit.

Why are you such a ” Richard Crainium ” ?

I’m not afraid to stand up behind my real name and call you out for your one-trick pony behavior.

As I said elsewhere, you first call on the Governor to do the right thing – call on the Senate and the House to reconvene to consider this matter. Of course he won’t. Then you take the next step and ask the courts for an injunction to block the Governor until the legislature can do their duty.

And watch that injunction request go down in flames for failing to meet “likely to succeed on the merits”.

Still, don’t you think that we deserve to follow thru in court if for no other reason than to stop or rubber stamp this kind of behavior in the future?

Help yourself. But Howell & Friends won’t do that because they know that a court decision of “This action is constitutional.” will make their little temper tantrum and press conferences appear to be even more petty and pouty. That gives McAuliffe & Friends more ammunition to point at them and say “See how they are. I can’t do anything with them.”

Paragraph 3, “Not even AE Dick Howard…” That is a glorious run-on sentence! Goodness.

It is a long sentence but it does not fit the definition of a run on sentence.

It’s OK to admit that you just wanted to say “AE Dick” as much as possible.

Nah. Gotta have a little fun with it. McAuliffe beat the General Assembly over their heads with the valid law yet again. He did it with the concealed-carry issue and now this.

Let’s see how many more decades till Virginians elect a legislature that lets murderers, rapists and child molesters vote, thirsts to take away gun rights from working people and think grown men should be able to shower next to little girls in bathouses.
Maybe 2050.
Until then NO F————– Medicaid.

Even when your reply makes no sense.

McAuliffe’s team has 8.5 months to write a database query (and create the database if needed) that will output all those particulars into a report, since the Constitution says he has to present it to the legislature.

Under “why each person merited the restoration of his or her voting rights on a particularized basis”, he can pick any reason he wants. Like “Because I like this guy”, “Because Tommy Norment is a sleazeball”, “Susan Stimpson came up to me in Wegman’s and told me to do this.” or “Because I can, you bastards!”. That could be a lot of fun for comedy writers.

I don’t think he can pick any reason he wants especially if he is obviously inventing reasons.

The Virginia Constitution doesn’t allow the General Assembly any chance to void his rights restoral decisions. The power is the Governor’s and his alone.

Skipping the comedy writers, that big-ass report can just say something like “I restore the rights based on completion of sentence.” Repeat 220,000 times and Howell and Friends can’t do anything about it.

Paging @disqus_UG6M2t9B8G:disqus back to this for any rebuttal arguments.

He’s not required to give particulars. The Constitution is clear on that.

And even if he was, it’d be easy to set forth the criteria he used, along with the list of people restored. The WaPo article linked makes clear that the state elections people have a list.