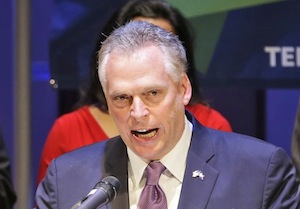 A new report reveals an even lower level of sleaze for the Democrat candidate.

According to a report from the NBC affiliate in Providence, Rhode Island, one “Terence McAuliffe, the former head of the national Democratic Party,” was a so-called investor in a scheme that involved essentially betting on people to die.

Apparently, the leader of the scam and McAuliffe friend Joseph Caramadre would arrange to steal or otherwise obtain the personal information of terminally ill patients. Then, using money from McAuliffe, he would purchase investments in the patient’s name that contained a death benefit that would be paid to himself and McAuliffe.

McAuliffe and others became owners of the investment instruments through Cranston estate planner Joseph Caramadre. Caramadre pleaded guilty to stealing the identities of terminally ill patients and using that information to falsely apply for annuities and bonds with death puts.

Prosecutors said Caramadre cost insurance companies between $37 million and $48 million from the scheme.
…

Caramadre and his partner have pleaded guilty to the investment scheme. Prosecutors said Caramadre made millions.

Is this the type of business acumen that Terry McAuliffe wants to use to lead Virginia? What a slimy huckster. No wonder he can’t wait to get his hands on billions of federal Medicaid funds…imagine the schemes he could hatch then!

The Cuccinelli campaign issued the following statement about this story:

“There is no question that this is a deeply troubling story, and what it reveals most of all is yet another glaring example of Terry McAuliffe doing business with highly dubious individuals. We’ve seen this movie before. Any minute, Terry McAuliffe will release a statement claiming ignorance of details. He will say that he was just an innocent investor, just as he was when he made millions of dollars just before Global Crossing went belly up and employees lost their jobs and life savings. He will claim no knowledge or responsibility for what happened, just like he said about critical investor documents—now the subject of a Securities and Exchange Commission investigation—when he was the chairman of GreenTech Automotive. In this case, as with all of the others, McAuliffe will say, ‘it wasn’t me.’

“Is this the kind of leader Virginians want to be their chief executive? A person who always seems to be involved with individuals, businesses and investments that are almost always tied up in wrongdoing, whether legally or ethically? A person who seems to always make excuses and avoids responsibility? It’s becoming clearer by the day why Terry McAuliffe has steadfastly refused to release his tax returns to the public. This is not the kind of behavior or judgment worthy of Virginia’s highest office.” – Chris LaCivita