Last year’s budget deal, which involved concessions on Medicaid expansion by the administration and General Assembly Republicans in exchange for Democrat votes on Gov. McDonnell’s signature tax and transportation plan, established a special legislative commission to oversee certain reforms of the Medicaid system before expansion could occur. That body is known as the Medicaid Innovation and Reform Commission, or MIRC.

As we’ve detailed previously on The Bull Elephant, the MIRC is tasked with overseeing implementation of a number of specific reforms. Once those reforms have been completed, the language in last year’s budget requires that the MIRC “shall” vote to expand Medicaid coverage in accordance with the provisions of the Obamacare act. 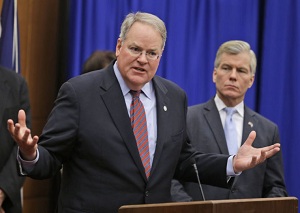 Yesterday, the MIRC met for the first time in several months and at that meeting Virginia Secretary of Health Bill Hazel outlined all of the actions taken to complete the required reforms, including those that he undertook while serving as Bob McDonnell’s Health Secretary. Importantly, Secretary Hazel declared that each of the substantive reforms required of MIRC have been completed. See below for an embedded copy of the secretary’s PowerPoint presentation to the commission, and here for the Daily Press account.

Why is this significant? Because, by the language establishing MIRC, the only thing left to be done by MIRC before they are required to vote to expand Medicaid is simply a report on the status of reforms to be made to the General Assembly.  Crucially, House Republicans argue that the MIRC is the only thing that keeps the Governor from being able to expand Medicaid unilaterally pursuant to the executive’s authority to administer the state’s Medicaid plan.

This becomes important in the context of the current showdown between the Governor and House Republicans, because if Speaker Bill Howell (R-Stafford) is successful in forcing the Governor to pass a clean budget, and the Governor then expands unilaterally based on the executive’s pre-existing authority to manage the state Medicaid plan (and with the help of the very same “sum sufficient” appropriation that would have allowed the MIRC to expand), then the only way to stop him becomes a court fight. As the Washington Times put it yesterday, “Under that scenario, Mr. McAuliffe’s office would follow through on his guarantee that expansion will happen this year. Republicans would likely take Mr. McAuliffe to court but maintain they held the line on the issue.”

1. GOP Foot Dragging. McAuliffe will argue that the MIRC has abrogated its responsibilities by not certifying that the required reforms have been completed. Not only does this underscore questions about whether the MIRC is even constitutional (see point 2 below), but it gives the Governor additional political cover to move unilaterally to get around so-called Republican “obstructionism.”  He’s already been laying the groundwork for that by talking about how MIRC needs to do its job, and how all the reform requirements have already been met.  Secretary Hazel’s report to the MIRC yesterday formalizes the administration’s stance on this point.

2. Constitutionality.  MIRC is likely unconstitutional, as it delegates too much legislative authority and discretion. Ken Cuccinelli as AG concluded this with the first iteration of the MIRC language (when asked by Bob Marshall to take a look at it). The language was revised to strip some of that discretion, but Cuccinelli opined informally afterward that he thought it still didn’t go far enough in making the MIRC duties simply ministerial with very clear, objective tasks and yardsticks. We think he’s right, and the fact that there remains disagreement among MIRC members and the administration about whether all the required reforms have been achieved (with House members of the panel suggesting more time is needed to assess whether the reforms are complete) is a testament to the fact that there is probably too much subjectivity in their mandate.  If the MIRC falls in court, so too does the GOP’s argument that only the MIRC—not the Governor—has the authority to expand Medicaid.

3. Unclear Language. The budget and statutory language conferring authority on MIRC is somewhat cloudy on the question of whether the statute grants MIRC sole authority (as opposed to parallel authority with the Governor) to expand.  House GOP leaders, as stewards of legislative privilege, understandably argue that the legislative commission has the authority.  However, as you may recall, Governor McDonnell reserved the right to direct Medicaid expansion on his own when he described the MIRC’s function in a letter to HHS Secretary Kathleen Sebelius, where he says ““the decision currently rests with me on whether or not to expand“.  Governor McAuliffe is highly unlikely to disagree with that assessment.

These arguments mean there is a very significant risk the Governor would win any court fight, and yesterday’s developments just made that more likely.

So what can be done?  Well, not much, unfortunately.  An attempt could be made to affirmatively block the administration from taking any steps to close the “coverage gap” with federal funds, but that would require a senate majority that simply does not exist.  The only thing left, in the short term, is to try to raise the political costs to the Governor for any attempt to act without explicit assent of the legislature.

Publicly, anyway, the administration currently disclaims any intention to try to circumvent the legislature and expand on its own; the Governor’s interests are clearly better served by a deal—any deal—that expands coverage without him having to take the political and legal risks of unilateral expansion.  But Howell and other Republicans have made it clear they’re not going to cave on this issue.

So the game of chicken continues.

See below for Secretary Hazel’s presentation.

[…] Stanley amendment wasn’t necessary to stop the Governor from acting on his own.  I’ve already laid out why I think that’s wrong.  But you wouldn’t have to believe me…if McAuliffe […]

[…] implement those reforms. Then, the budget language sets out what those reforms are (reforms which, according to Health Secretary Bill Hazel, have already been […]

[…] made (successfully) by governors in Ohio and Kentucky. We’ve written about this before (see here for an […]

Reply
WaPo Finally Catching on to the Medicaid Expansion Endgame - The Bull Elephant May 2, 2014 at 3:29 am

[…] Medicaid would be available to Governor McAuliffe. Our latest efforts on this subject are available here and […]

Reply
Howie Fires Back at Speaker Howell on Comstock and Medicaid - The Bull Elephant April 11, 2014 at 3:26 pm

[…] who will enable or allow Medicaid expansion (e.g., by not fighting to strip the Governor of the practical ability to expand Medicaid on his own), unlike Del. Bob Marshall (R-Prince William). In fairness, her website did have troubling language […]

So you are saying that all of the pieces are already in place for the Governor to expand? “Game of chicken” is just that–a game. If the House were really against expansion, they would have never brought it to the brink like this. I can hear Governor McAuliffe now…”Go ahead. Sue me.”

Link to Cuccinelli’s opinion letter on MIRC, which presents a basic separation of powers argument:

MIRC essentially has plenary power to expand Medicaid which is (VA) unconstitutional. If the General Assembly is relying on the authorizing legislation for MIRC to override McAuliffe, then the General Assembly is doomed. More importantly, if the G.A. Republicans rely on the shield of MIRC as their primary argument against McAuliffe’s unilateral expansion, then they are putting up a straw man so they can lose while pretending to fight Medicaid expansion.

The truth is actually quite frustrating. As far as I can tell the Governor does not have the power to unilaterally expand Medicaid. McDonnell, in his March 2013 letter claimed “the decision rests with me on whether or not to expand…” I remember reading this and simply wondering, what the heck is he thinking. McDonnell paved for the way for McAuliffe to claim unilateral authority to expand.