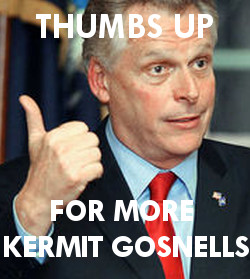 One year ago today, a monster was convicted in Philadelphia. Now, Virginia Gov. Terry McAuliffe wants to undo protections put in place in Virginia to try to stop or prevent such horrific crimes from happening here.

If you don’t know the name Kermit Gosnell, you should. The man has a place in hell waiting for him right between Josef Mengele and Pol Pot. Skip this part if you have a weak stomach. From PolicyMic:

Stepping into the room, the FBI was flummoxed by the pungent smell of urine in the air and blood spilled on the floor. Originally there to search for illegal prescription drugs, officials stumbled upon an egregiously disturbing and disgusting situation. They found unsterilized, damaged, and outdated equipment and suction tubes for abortions; fetus remains in used household cartons and containers; and unlicensed and “fake” hospital personnel.

What investigators found shocked them. Gosnell operated a “clinic” in the most squalid conditions imaginable, with body parts and dead third-trimester babies stuffed into shoe boxes, and even one found frozen in a gallon water bottle. Gosnell was responsible not only for the death of countless hundreds of viable babies, but for the death of numerous women under his “care,” as related in this excellent short documentary film. One gruesome detail that has always stood out for me: Gosnell kept a jar of severed babies’ feet in his office as trophies.

How could such a monster get away with this kind of thing? Very simple. In Pennsylvania, for example, officials decided that regulations would be a barrier to “safe” and “legal” abortions, and left abortion clinics less regulated for health and safety violations than nail salons. The radical abortion lobby fights every sensible regulation of abortion tooth and nail, regardless of the widespread evidence that crimes like Gosnell’s are all too common.

Of course, death is always the outcome for the unborn child, and increasingly for women who seek these â€œsafeâ€ and â€œlegalâ€ abortions.

Ask Tonya Reavesâ€™ family. She died from a botched abortion in a Planned Parenthood clinic as her abortionist allowed her to bleed for 5.5 hours without ever calling 911. Protecting abortion was more important than protecting, and saving, her life.

Abortionists across the country have been charged with murder, illegal drug trafficking, botched abortions, rape, and millions worth of Medicaid fraud. When your business centers around killing human life, corruption in any other area is easy.

It was in the light of the shocking news of Gosnell’s activities that a bipartisan coalition of Virginia leaders acted together in passing a law requiring regulation of abortion clinics like any other outpatient surgical clinic, a move that would prevent any Kermit Gosnells in Virginia.

Today, on the first anniversary of the day Gosnell was convicted for a fraction of his crimes, we see from numerous news outlets that Gov. Terry McAuliffe is (in an increasingly characteristic style) moving to sidestep the legislature and undo these regulations. From JR Hoeft at Bearing Drift:

Given that these regulations are Virginia law, one would expect the attorney general to uphold them. Of course, with this administration, that doesnâ€™t appear to be the case. It would appear that Attorney General Mark Herring is gearing up to find ways around the regulations…

McAuliffe has to play to his base (as does his putative successor, Mark Herring), which means kowtowing to the most extreme pro-abortion advocates (McAuliffe got over $1 million from such groups when running against Ken Cuccinelli). But most voters don’t agree that abortion clinics should be essentially unregulated, or that these “surgical” procedures should be done in facilities any less sanitary and safe than any other outpatient clinic.

If we want to serve the cause of life, then we should start where we know we can win the battles, and that means focusing on issues like this, and late-term infanticide, where vast majorities are with us. This is a winning issue.Â  We need to stop hanging words like “transvaginal” around the necks of our candidates every election season like anchor chains, and instead expose the culture on the left that facilitates the Kermit Gosnells of the world, and the callous disregard for women’s health that attend such butchers.Â  That’s the best way to actually save lives, and hasten a transformation back to a culture of life. And, I might add, it’s the perfect issue to push back on with an administration that increasingly disregards the rule of law. This is not an issue McAuliffe can win.

McAuliffe Pushing For Reduced Abortion Regulation on Anniversary of Gosnell Conviction was last modified: May 13th, 2014 by Chad Ochocinco

It’s definitely an issue that McAuliffe can win when you go off the rails saying that these regulations were designed to stop the “Kermit Gosnell” horror from happening in Virginia. You start looking like a hyperbole-spraying idiot on an issue where there will never be any sort of agreement on.

“on an issue where there will never be any sort of agreement on.”

So poorly regulated abortion clinics, where operators and employees loosely interpret laws and regulations and loosely maintain a hygienic environment is not an issue which can be discussed openly and honestly? What planet do you live on? The one where only people who disagree with you are self-righteous, hypocritical boobs?

Um. I was talking about the general issue of abortion.

Proof Or Not Real of these massive violations that were taking place in Virginia before these regulations, please?

The issue, Bruce, isn’t whether such things were happening in Virginia before. The point of the regulations McAuliffe opposes was to ensure they never happen in Virginia. A government is not required to wait for a horse to escape before shutting the stable door.
As the regs were for created for just the reason Steve Albertson gave, it is yo who comes off as an idiot, not Albertson.
The question of general agreement on abortion (or anything else) is wholly irrelevant. We don’t need such agreement for making laws — if we did there’d never be any laws at all.

It is a simple fact that Gosnell got away with his little clinic of horrors because Pennsylvania authorities didn’t want to enforce existing requirements lest they keep women from getting their precious abortions. If the current Virginia administration is playing the same game they are asking for similar results.