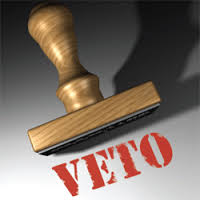 On his monthly radio show, showing his flair for the dramatic,  Governor McAuliffe vetoed six redistricting bills. These are the first vetoes of this legislative session. [read_more]The Governor said,

“First of all I don’t think these bills are constitutional,

This comes one day after SCOTUS shot down Alabama’s redistricting plan saying it discriminated against Blacks when the republican controlled state house drew the legislative districts.

McAuliffe also said he will sign, amend, or veto the remainder of the legislative bills by early on Friday, two days prior to the deadline.  The Governor will sign approximately 800 bills, including the budget bill, later today.

Why isn’t this crook in jail?