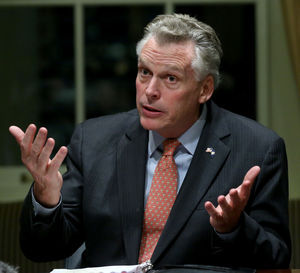 In April Governor McAuliffe traveled to Europe for a week with a team of “economic development consultants” billing the taxpayers $186,000 for the junket. No Governors in the country travel at taxpayer expense more than Virginia Governors, 31 times over the last ten years, according to Andrew Cassey an assistant economics professor at Â Washington State University who examined data from all 50 states. Cassey was unable to determine if these trips made any difference in the economic health of the state,

“It’s really hard to prove,” Cassey said in an email. “Deals could be worked out years later. The best anyone has done is to find evidence of a small uptick that we cannot be 90 percent sure is from the mission or some other event, including randomness.”

Nevertheless our Governor continued the tradition of lavish trade trips around the world. Â From DailyPress.com,Â

The state paid for professional photography, a London public relations team and a hotel dinner party highlighting the Virginia wine industry. Bills from a pair of London-based consulting firms working on the trip topped $50,000, and the cost of renting and running a booth at a trade fair in Germany cost about $29,000.

Professional photography and a public relations team? Â Really? Â Were those things necessary? McAuliffe insists such trips are ‘crucial’ although there is nothing he can point to as a result of such trips.

McAuliffe spent time in Belgium, Germany, and England where a good time was had by all.

My experience is limited to only one startup so my grasp of establishing market presence may be limited but if you are the relative new kids on the block, a group of small production winery boutiques (which this group is) don’t you establish and target saturate your brand in your local marketplace (i.e. Virginia), expand that marketing with some local reputation kudos into the national market (i.e. Southeastern US then nationally) and only then then tackle the import/export complexity and financial regulatory expense of a highly competitive and regulated EU overseas distribution marketplace?

Wouldn’t a trip to Virginia Beach, Norfolk, Williamsburg, Charlottesville, Roanoke or Fairfax with perhaps a side visit to Atlanta, Charlotte and Miami be more in order then London? But then of course you couldn’t spend any time consulting for your master Hillary Clinton with Prime Minister David Cameron’s cronies and other EU political insiders on the status and potential Clinton joint working support for curtailing the upcoming EU referendum and it’s increasingly positive withdrawal polling numbers within the UK. Of course there is also saving the campaign some cash outflow by just having the Virginia taxpayers pick up the travel, wining (pun intended) and dining bills for bottles of Virginia wine that will never see a cork popped in London town. I agree SOME salesmanship indeed.

less than $200k for a $52 billion organization – that amounts to almost nothing. Taking the stat that trips like this happens about 3 times a year for the past 10 years, this is a silly complaint about the governor.

That’s like 20 watches right? Seriously though, if you get corporate sponsors you get indicted, if you use budgeted funds you get criticized.

There are at least 50 states that can offer American advantages, Virginia has to pay the price of admission to get to the customers like the rest of them.

If you let your kids take cases of drinks out of the Executive Pantry it gets way more different quickly.

This is how economic development works. As much as I dislike a lot of things about Terry McAuliffe, he’s a damn good salesman and a fun person to be around. Those characteristics lead to things happening.

You conveniently omit the fact that expenses for these trips are in the budget that was passed with a majority of Republican votes.

Yeah, like building a car company that doesn’t sale any cars? You have to be some kind of “fun” to get away with that kind of malfeasance!

No. Not like that at all. I’m talking about the overseas trips that result in things like the Ikea plant here in Danville and its coming expansion. I’m talking about building up Virginia wine exports so that the 10 wineries in the area can move a lot more of their products.

Those kinds of things.

There’s no evidence that Governors did any of that with their overseas trips.

You’re totally clueless if you don’t believe junkets like this don’t pay off down the road. You’re a partisan hack if you don’t realize that McDonnell & Gilmore did the same thing. You’re a total idiot if you don’t see that a Republican-led budget process didn’t keep the money in for these types of trips.

So McAuliffe spent $186,000 of taxpayer money to help the Donald sell his wine. How kind. Perhaps the kind Governor will do a fund raiser for Republicans next…

More like Tomahawk Mill , Sans Souci and Rebec wineries. The ones that truly can use the help.

A guy who can do that, get away with it, AND get elected Governor must be able to do pretty well with the international film flam.