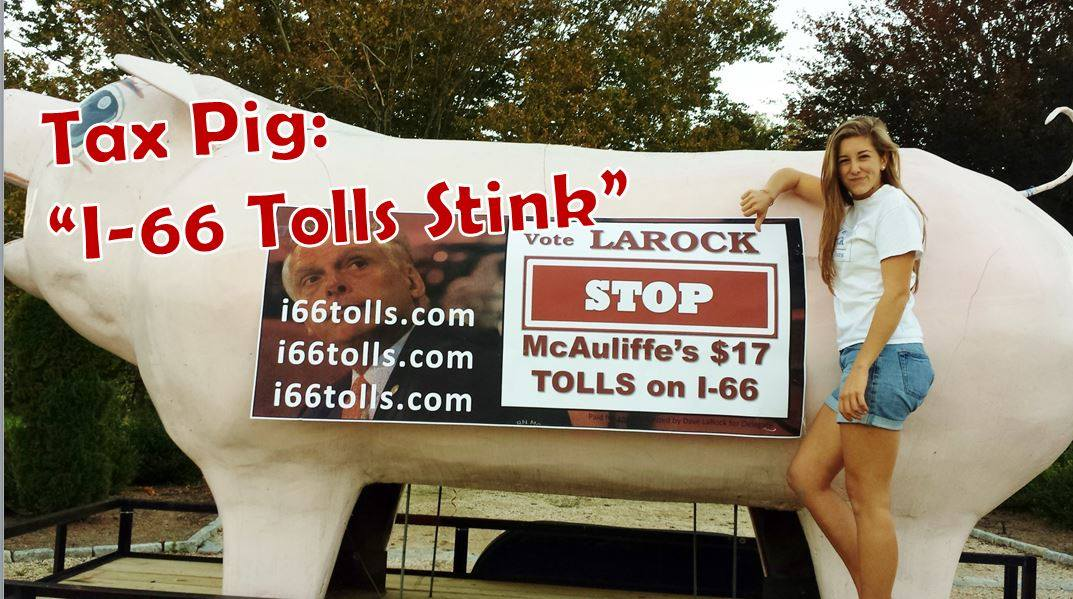 If one were to wonder what it feels like to be treated like a red-headed step child, welcome to commuting in Northern Virginia.

If you’re reading this, there is a strong chance you (as well as your friends, family and business customers or partners) are about to be asked to pay another $4,250 a year in tolls to the Commonwealth of Virginia for the option of taking the shortest route from Loudoun County to Washington D.C., starting less than two years away in 2017.

Do I have your attention? That’s the cost that Gov. Terry McAuliffe proposes to be borne by anyone who rides on I-66 inside the Beltway during peak hours when the governor’s plans to enact tolling of that road are brought to completion. That’s $17 a day, five times a week, 50 weeks a year for many drivers, in addition to the sky-high tolls of $17.40 a day just to ride on the Dulles Toll Road and Greenway. That means commuters coming from Loudoun County could be paying over $34 a day in tolls.

Maybe it would better to compare Gov. McAuliffe’s treatment of these drivers to Cinderella rather than a red-headed step child, since he’s spoken out strongly against this kind of treatment when applied to other regions.  Just a few months ago on July 10, an official press release from the governor crowed, “Governor McAuliffe Announces Deal Ensuring No Tolls on the MLK Freeway Extension in Portsmouth.”  In a Channel 3 interview McAuliffe said, “…our job is to protect taxpayers, but these tolls (speaking of the $4 MLK extension tolls) were so burdensome on the citizens of Portsmouth it would have impacted their ability to do business, their quality of life.” Well if that’s not a ridiculous double standard for two different parts of Virginia, what is?

Need to add a little more salt to the wound? Toll revenue from the new McAuliffe mega-toll,  for the most part, is not slated to improve I-66. Most of it would go toward paying Metro subsidies and building bike paths, which most drivers would never use. Adding a lane each way for that 10-mile stretch of highway is on the agenda, but with the underwhelming deadline of 2040. By that time, many of the people reading this will be retired.

Gov. McAuliffe wants to treat my hard working constituents like cash cows, and he is ready to shake them down again. It’s an utterly unrealistic demand on the hardworking families and businesses of Northern Virginia.

It’s no secret that our district has serious transportation challenges. As I’ve said for years, we can make excellent headway on these challenges without resorting to massive tax and toll increases. Last year, I passed legislation to require the evaluation of all projects based on meaningful factors like congestion relief, and there is still much to be done to make sure that our transportation spending is more efficient. Before we even THINK about going back to taxpayers and commuters and asking for more money, we need to tighten up the way Virginia does business and make sure every cent is spent as efficiently as possible. Anything short of that is unreasonable.

If you object to these outrageous mega-tolls, sign the petition against it here.

I don’t see how you lay this solely at the feet of Governor McAuliffe, the Commonwealth’s go to black hat to obfuscate Republican legislative duplicity. The $2.1 billion I-66 Outside the Beltway project in Northern Virginia is authorized under the Public-Private Transportation Act (PPTA) and is intended to transform 25 miles of I-66 into a multimodal facility with three regular lanes in each direction, two express lanes in each direction and enhanced commuter park and ride lots, the express lanes would be free at all times to HOV-3+ travelers, as well as buses. Dynamic pricing (tolls) would be applied for everyone else. If I understand the proposal correctly it is very similar to the dynamic pricing being used on the 495 and 95 Express Lanes today. Those are the facts as I understand them and the $4,250 a year in tolls assumes a single auto based commuter traveling at peak hours, who has rejected express mass transit and HOV ride share, in other words top tier commuter pricing and convenience. Expensive and difficult to understand in the post transportation tax levy pushed by the Republican legislative, without a doubt, but unexpected, NO.

In the last legislative session the Public Private Transportation Act (PPTA) (HB1886) was revised by codifying existing guidelines and passed out of the House and Senate unanimously. The PPTA is an important tool for the Commonwealth to address critical infrastructure needs in Virginia and no serious attempt was introduced to modify or better manage it’s authorization or expenditure processes and bring it move into line with direct legislative oversight by a Republican majority. The Public-Private Transportation Act HB 1886 also passed and established some requirements for the finding and ranking of public interest in the transportation area but it’s coverage was limited and I believe it will NOT be in effect until 2017, way too late for the I66 project. In addition, several pieces of legislation (HB2294, HB2296, HB2297) that would require General Assembly approval before tolls could be imposed and collected and would require legislative approval of any public-private transportation project (introduced by a Democrat by the way) never made it out of the Republican dominated committee. So the evil McAuliffe meme is an extremely leaky rationalization. The seed for this project was planted in the last session with Public Private Transportation Act (PPTA) (HB1886) under Republican leadership. Anyone expressing surprise by the recent September 17th resolution approval by The Commonwealth Transportation Board (CTB) allowing VDOT to issue a Request for Qualifications (RFQ) for interested “private sector teams” to share their resources, qualifications and experience to deliver the $2.1 billion I-66 Outside the Beltway project in Northern Virginia, under the PPTA, just doesn’t understand the phenomenon of Northern Virginia cronyism in full display. Good luck with that petition and the McAuliffe blame game.

Lawrence, the information you provide is about the Outside-the-Beltway project. Delegate LaRock’s Op-Ed here is about the Inside-the-Beltway (ITB) project. ITB is proposed by Gov. McAuliffe to be a VDOT-built-and-operated project (not PPTA), with the toll proceeds distributed to projects as directed by the transit-funding Northern Virginia Transportation Commission (NVTC).

You are correct two proposals same process and generally jointly presented at numerous public hearings, roundtable discussions and outreach events to engage the public in the plans for improvements to I-66

Lawrence, are you on planning MPO or private company, that was a mouthful. Having lived there, I 66 has been a problem for sometime, and legislative lingo aside, it bears the appearance of nimbyism of wealthy Arlington residents.

didn’t Northern Virginia carry this fool right into the Governors office?….you get what you vote for….