Terry McAuliffe appears to be placing all his eggs into the Medicaid expansion basket. That is, whenever he is asked for how he can pay for his proposals (education, energy, transportation, etc.), he relies on revenues generated by the billions of dollars that will be spent by the federal government to expand Medicaid under Obamacare. 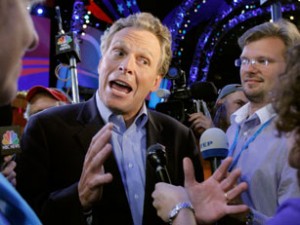 The problem? The $500 million McAuliffe relies on is pure fiction. Why? Because this includes money Virginia would “save” by reforming the implementation of Medicaid. As I’ve explained previously, Obamacare promises states 100% of the funding necessary to expand Medicaid for the first three years. After that, the feds will supposedly only cover 90%, leaving Virginia to pick up the tab for the remainder. In Virginia, the General Assembly–as part of the taxportation deal–agreed to reforms in Medicaid that would make up that 10% so that there would ostensibly be no net burden to Virginia taxpayers. McAuliffe thinks he can spend this savings on whatever he wants, despite the fact that the existing budget already puts this savings toward future shortfalls in Medicaid.

The reality? As calculated by Chmura Economics and the liberal Commonwealth Institute (a Richmond outfit that even employs a former McAuliffe staffer), Medicaid expansion would generate no more than $60 million in additional tax revenues.

Meanwhile, Terry McAuliffe’s campaign promises new spending that would total roughly $14 billion (excluding many of his proposals that are too vague to actually score for budget purposes). Terry says he’d be able to save money on “efficiencies” in state government, which is laughable coming from a guy who has on so many occasions that he really doesn’t have the foggiest idea of what the Governor’s job is, much less the rest of those in state government.

Assuming Terry is sincere about his campaign promises (!!!), one is left to conclude that he must mean to raise taxes to pay for his new spending. That tax bill would equal roughly $1,700 per year on a typical Virginia family.

Terry McAuliffe’s plan is the absolute last thing Virginia needs as we continue to deal with the effects of Obama’s lingering economic malaise and the government shutdown. Now, what we really need is for the Cuccinelli campaign to hammer home in TV ads how the almost comically inept McAuliffe will cost Virginia taxpayers, in contrast to the tax savings and job growth that will flow from the Cuccinelli plan.

Details below, provided by the Cuccinelli campaign: