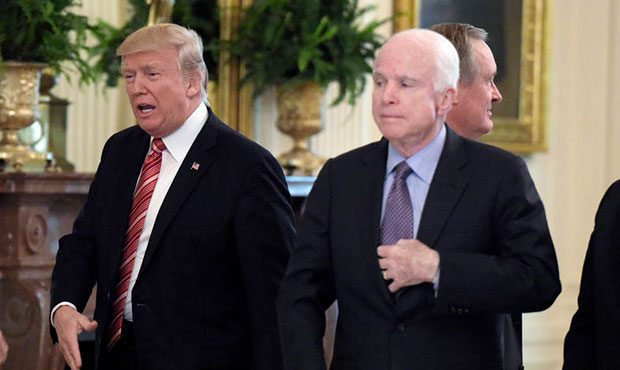 Besides President Trump, it appears that former Alaska Gov. Sarah Palin, and top 2008 campaign aides Steve Schmidt, Nicolle Wallace and John Weaver, were NOT invited to the various funeral events for Sen. John McCain, who died last Saturday after a long battle with brain cancer, just shy of his 82nd birthday.

I watched the Arizona “celebration” on Fox News Thursday, and was taken aback when McCain’s casket was taken away to be flown to the Capital, where he will lie in state today (Friday, Aug. 31), and the Frank Sinatra song, “I Did it My Way” was playing in the background.

Fox News noted this was McCain’s choice.  So, even while dying of brain cancer he was dictating his funeral, down to the music – and obviously who would be invited, and who would not.  And his “farewell” letter attacks Trump indirectly.

Former Vice President Joe Biden, a Democrat, who faced Palin in the 2008 campaign when she was McCain’s VP pick, said something prophetic: “All politics is personal.”

Is it really, Joe?  Well, I guess so given how pettiness and payback is part-and-parcel of politics.  It’s been done to me, and I have done it myself in my 10 years in local elected office in Loudoun County.

And, it does occur with funerals, too.  Here are a few examples:

President Obama declined to attend the funeral of former British Prime Minister Margaret Thatcher, though dozens of world leaders did but he didn’t flinch when invited to speak at Nelson Mandela’s funeral in South Africa.  Obama, the son of anti-colonialist parents, obviously wanted the thrill of throngs of Africans cheering him vs being just another “world leader” at the funeral of a conservative British Prime Minister.

Sen. Paul Wellstone, the Democrat who died in a plane crash during his re-election campaign, was honored at a Minnesota event, which degenerated into a rally for Walter Mondale, who was tagged to replace him on the ballot. GOP members of Congress walked out.

At Yitzhak Rabin’s funeral (he was assassinated in 1995) his widow refused to shake Benjamin Netanyahu’s hand – as if Netanyahu was responsible somehow for her husband’s death.

There was no political payback at the very bipartisan funeral and wake for Sen. Edward Kennedy in 2009.  I witnessed the motorcade go by the JFK Library as we were vacationing in Boston.

And, despite being paranoid about enemies, Richard Nixon’s funeral featured Bill Clinton, then president, as speaker.  Hillary was on the Judiciary Committee impeachment team in 1974 and she was there, too.

Indeed, when it comes to John McCain, Donald Trump did strike first with his unfortunate comment in the summer of 2015 that McCain was a war hero “only because he was captured,” and then implied that being a POW (where McCain was in solitary confinement and tortured for three years) was not heroic.

And, even while the senator was dying, Trump would always criticize him at rallies for his 2 am. “thumbs down” vote which killed the GOP effort to repeal Obamacare.  While Trump did not mention McCain by name, it was apparent whom he was bashing – and he did this up until the week McCain died. Trump did not mention the Senator’s name when he signed a bill named in his honor

Despite the wonderful statement the president issued about McCain’s death, and putting the flag back at half-staff after it was raised, Trump is sending Vice President Mike Pence to speak at the funeral.    Two men McCain lost presidential races,  George W. Bush and Barack Obama are the only ex-presidents speaking.

As such, Republicans cannot get their fill of vitriol about McCain on Facebook and social media .  Despite my criticisms of the funeral invites, we must respect John McCain’s 35-plus years of service in the House and Senate, and particularly, his five years as a prisoner of war of the North Vietnamese.  And, you all know I’m a Trumpster from the get-go.

Pettiness and payback exists and I have seen it first-hand.  Perhaps the worst was in March 2011 when I witnessed then Maryland Gov. Martin O’Malley (D) snub his predecessor, Republican Robert Ehrlich, at the ribbon cutting of the Intercounty Connector highway in Montgomery County.  Despite being instrumental in getting the long-stalled highway into construction when he was governor of Maryland, Ehrlich was not invited, nor recognized at the event when he showed up. Thanks to GOP Gov. Larry Hogan, the ICC has been named in Ehrlich’s honor.

(Former Maryland Gov. Bob Ehrlich (R) and his Secretary of State, Mary Kane, at the ribbon cutting for the ICC highway in March 2011.  Ehrlich was snubbed at the event. (Photo by Ken Reid)) 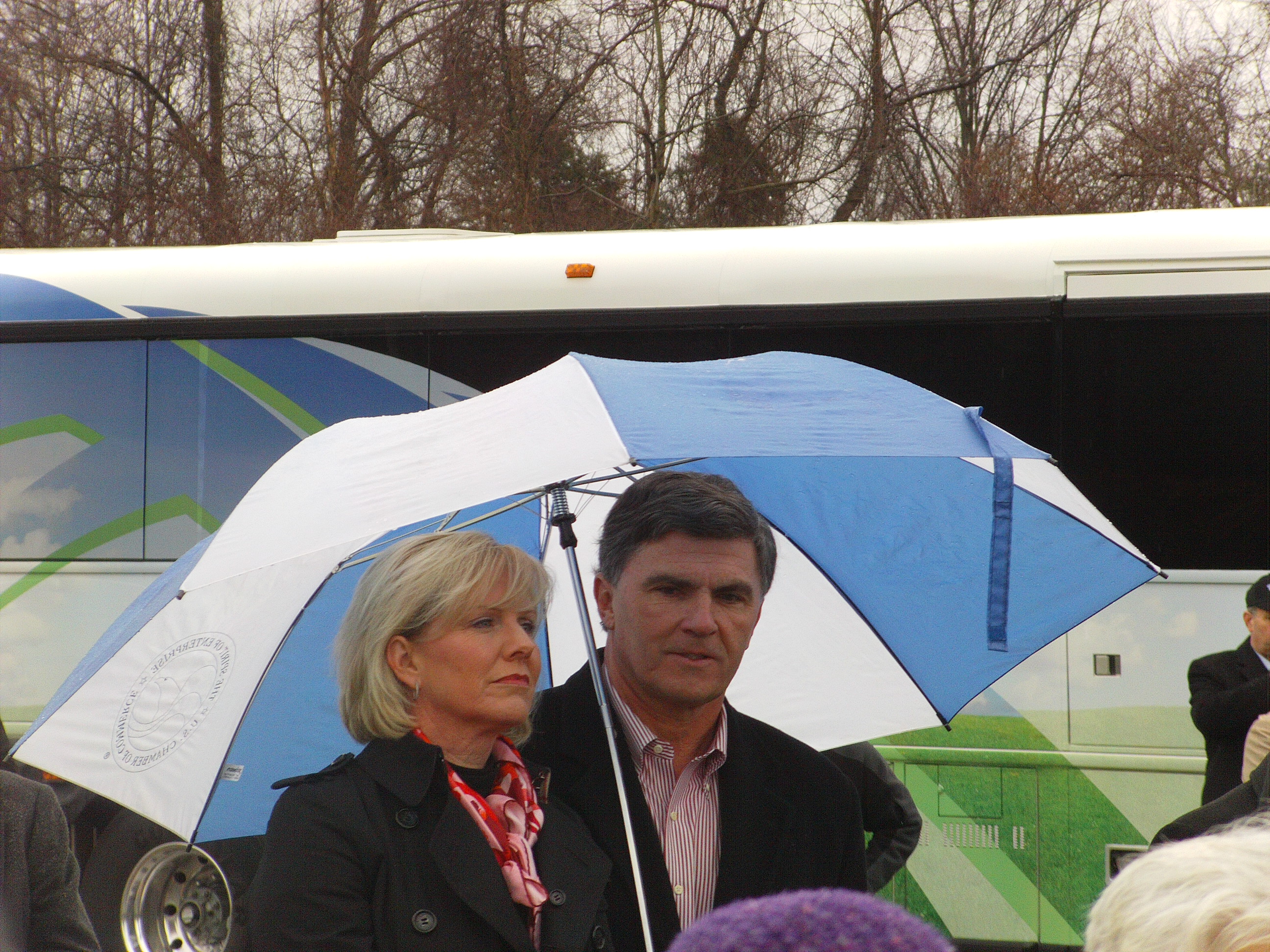 I guess the analogy here between O’Malley/Ehrlich and Trump/McCain is the hurt had not healed.  Ehrlich tried to unseat O’Malley in 2010 and of course the Trump-McCain feud continued to the last days of McCain’s life.

But, then how does one explain why McCain did not allow Palin and his own three campaign aides at his own funeral when that all occurred in 2008?

I guess that despite his heroism and leadership image, John McCain is a sensitive softie inside and could not be magnanimous and show some leadership by letting these people into his funeral.

So, I guess I will step up to the plate.

I hereby announce that for my funeral, which will probably be in Leesburg, I will ensure my heirs invite a few political opponents of mine to speak (assuming they survive me).

Given the fact they said little good about me while we served together, and I probably didn’t say much good about them either, it certainly would be interesting to watch them stand before my family, friends and supporters in the synagogue and say something nice about me – for once; one last time.   I just picked out my plot at Union Cemetery and headstone.  I have not picked the music or invitees yet.

God rest, John McCain.  And, despite your pettiness with Trump and Palin, et. Al., thanks for your service to our country.

McCain’s first wife, Carol, who was a famous beauty and a successful swimwear model when they married in 1965.. the woman who faithfully stayed at home looking after the children.

Your frantic efforts to discredit McMain aren’t convincing anyone. Apart from being a war hero, he was one of very few republicans with the balls to stand up to the sleazy con-man in the oval office.

Ken Reid, Over the years, I have worked on many political campaigns over the years. I worked on the McCain campaigns for President. McCain sent a clear not so subtle message to us that he held Sarah Palin, Steve Schmidt and the Aides responsible for his losing his 2008 bid for the President. First, let me say that I did not agree with McCain hiring Palin as his running mate. He was advised against it, but chose to do it anyway. McCain was solely responsible for disregarding all the advise and hired her anyway. Steve Schmidt was hired late in the game. Steve Schmidt got McCain’s ear and told him he could turn his campaign around for the win. McCain hired Steve Schmidt who proved to be a major disappointment. Do your research on Schmidt before hiring him. I have no clue about the 8 aides. McCain is responsible for his losses.

I worked in our local Republican Headquarters office manning the phones, talking to walk-ins, and handing out signs and literature. Until McCain selected Palin, the office was completely dead – no visitors, no calls, nothing. After he selected Palin, the office phones lite up, people came into the office to get signs and literature. People were energized – yet nobody wanted a McCain only sign or handout, they had to have Palin.

My impression after the fact was the McCain was jealous of Palin’s obvious popularity among the base, and his lack thereof. He foolishly threw her into the hands of leftist news people like Couric et al where she got blindsided. McCain made a major strategic mistake by doing this because her popularity was at meet and greet types of crowd events. Even today, Palin is more popular with the base than McCain ever was.

I do not think McCain could have rescued his campaign because he decided to keep “hands off” in confronting Obama. He was apparently afraid that any negative statements would be called “racist”. The result was he never exposed the many negatives of Obama and the rest is history.

Interesting, and somewhat shameful, that this is the first article here about Senator McCain’s death.

McCain was a very divisive figure. This article is quite accurate.

Mrs. Rabin was completely justified in not shaking the hand of the corrupt Netanyahu as he and his cronies were certainly responsible, in part, for creating the atmosphere that led to Yitzhak’s assassination. To learn the details, read Mrs. Rabin’s excellent memoir, “Rabin: Our Life, His Legacy”.

Hillary Clinton served on the staff of the House Judiciary Committee, not the Ways and Means Committee.

As for McCain, he going out the way he wanted to. Good on him.

Allow the dead to rest in peace. We’re all marching to our maker.

And, I don’t disagree with you, but someone who served this country as long as McCain should have been a big boy and put aside disagreements with Trump, Palin, and even his own aides, and not disinivted them from the funeral. So, although I;m a small time politician, I am now vowing to NOT just invite my politcal opponents to my funeral (whenever that will be), but allow them to actually SPEAK.

Good for you, but I don’t know what I will be thinking/doing when facing a certain death, I don’t think most of us know.

Great point re: O’Malley and Ehrlich. Especially since Ehrlich’s predecessor Parris Glendening all but killed the ICC, and Ehrlich brought it back.

I read his list of pall bearers and ushers. Very few Republicans. This seems to confirm concerns that he was more RINO than Republican. His vote to preserve Obamacare was a direct insult to the American people. I understand his refusal to invite President Trump, but his insult to Sarah Palin is really ugly as she always supported and honored him. It is time to let him go and be mourned by his family.

I am wondering what is going on with this never ending funeral.

I remember what was said by the left when he was running for president. I did some research on him then and wondered why republicans would even consider “Songbird” McCain.

“His vote to preserve Obamacare was a direct insult to Trump but was in support of the American people.”

Fixed it for you.

McCain ran on repealing Obamacare. His constituents voted him in as a result.

I think he ran on more of a repeal and replace thing. The vote you are referring to was neither. It would have done great harm to a large swath of Americans just so Trump could twist it to claim some sort of political victory. He did the right thing – and that’s why he did it.