On the second day of his defense, Mr. McDonnell sat impassively in United States District Court here as his lawyers painted him as bedeviled by two Maureens — one his younger sister, who made the money in the family but failed to stop him from taking a loan that could now land him in prison; and the other his wife, who badgered him and invited in the businessman who would become his undoing.

“She seemed enamored with him, infatuated,” Kathleen Scott, special assistant to the first lady, said of Ms. McDonnell’s feelings for the businessman, Jonnie R. Williams Sr., whose $160,000 in secretive loans and gifts are the crux of the corruption trial. “I think he made her feel special.”

The defense on Tuesday focused on the couple’s finances, with a smattering of personal shots against the former first lady. The idea was to show that Mr. McDonnell was in no financial jeopardy and did not need to trade his influence for Mr. Williams’s largess. Instead, it was Ms. McDonnell’s blind spot for Mr. Williams, the former executive of the dietary supplement maker Star Scientific, that caused the trouble.

Poor little Governor was simply helpless and clueless while his wife was infatuated with a snake oil salesman.

Mr. McDonnell’s sister (the other Maureen McDonnell) and Ms. Scott (special assistant to the First Lady) also reinforced the defense strategy of depicting the former first lady as a selfish bully, while celebrating the former governor, once thought to be a possible running mate for Mitt Romney, as an honest and naïvely friendly politician. Ms. Scott described scenes in the private quarters of the governor’s mansion in which the first lady would be “ranting and raving about this, that and the other” while the governor tried to read the newspaper or watch television news. “He usually just tuned her out,” Ms. Scott said.

What a guy!  His children must be so proud of their father.   It’s completely disgusting that the Governor would allow his children’s mother to be portrayed this way in court.   No child, regardless of their age, wants to hear that their mother was a shrew and their father tuned her out.  Bob McDonnell is allowing terrible things to be said about his children’s mother without any regard for the effect it will have on his adult children.  We’ve already seen Cailin McDonnell cry on the witness stand.  Obviously it’s not likely that the McDonnell’s marriage will survive this trial but we have no idea what the long term effects will be on the five McDonnell children.  It will have an impact on their lives forever.   Bob McDonnell will do whatever he has to do in an attempt to save himself, without regard for his wife and children.  I have no respect for a ‘man’ who behaves this way.  None at all.

Bacon’s Rebellion has a good post on the McDonnell trial here.  Some good comments too.

Much more here,   here and here. More details on the McDonnell’s finances here. I will be so glad when this sordid trial is over.  I’m sure the McDonnell children will be  too.

The latest from BaconsRebellion.com on “Mo Maureen and Po Maureen”.

The other Maureen McDonnell. 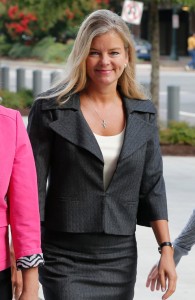 […] Bob McDonnell and his wife did unethical things, and exhibited (while in office and certainly while on trial) some horribly human weaknesses. But arranging a meeting for a donor and friend, or introducing […]

Bob needs to get a round of golf in while this is unfolding… on Johnny’s tab.

I disagree with you on this one, Jeanine. In the past 100 years women have demanded, fought for, and earned equal rights. That means equal punishment as well. I am of the opinion that in the political arena the days of first letting public women into the lifeboats, are over – especially if they caused the leak in the ship. Or, in other words, she should take the fall, if she dug the hole. I don’t know the governor, but I do remember attending a series of VA Beach Republican breakfasts back in the mid 1990s during which Bob McD often spoke. He seemed like a good guy and a dedicated public servant. However, I am very good friends with a highly placed lobbyist for a conservative organization. And my friend knows lots of people in the McDonnell inner circle, who all admitted Maureen was T-R-O-U-B-L-E. This was no secret, and lots of folks pitied the governor. Marriages do fall apart and spouses go bonkers. It happens.

This governor was so honest that he cooked up a deal in secret with the Democrats in the General Assembly to foist the largest tax increase in history on the citizens of Virginia — and in a manner that would make it impossible for fiscally prudent legislators and citizens to mount any opposition to it — they sprang it on the unsuspecting citizens in the waning hours of the General Assembly session, after the fix was in, after it was a done deal, too late for anybody to do anything to stop it. Yeah, he sounds honest. Yeah, right, he sounds like the kind of guy who wouldn’t destroy his wife’s reputation to stay out of jail. Yeah, he sounds like the kind of guy who has a thread of principles. On what planet? Whether or not he goes to jail, his legacy is that he hoodwinked the taxpayers and voters of Virginia. He ran as a conservative, and then he gave Virginians the biggest growth in government in history. And now we have both McDonnell’s tax hike AND a deficit from the budget that he left to Gov. McAwful. But it gets worse: Because North Carolina has been LOWERING taxes while Virginia was raising taxes, now all the private sector businesses are being lured to North Carolina. Jail or not, his legacy is $#!+.

You’re right. Bob should have grabbed his wife by the hair and thrown her in the dungeon. Then we wouldn’t be hearing stories about her peddling vitamins to Ann Romney for crying out loud.

Huh? Who said anything like that? We’re discussing McDonnell’s chosen line of defense.

Of course you don’t get it otherwise you wouldn’t be dumping on Bob. His line of defense is, “My wackjob wife (which she is) went around ruining my reputation and she’s not worth me taking it up the arse.” His only (unpolitically correct) hindsight solution would have been to corral his wife before the damage was done. Granted Bob brought some of this on himself. But his wife has done enough. She’s not worth defending. He needs to take custody of his kids.

His children are all young adults. Yes, Bob McDonnell should have paid more attention to what was happening in his family.

go to Bearing Drift to read more comments on this topic. these defenses are coordinated.

Of course they’re coordinated. But so what? So Maureen agreed to take the fall for the Governor. He could have stood up for his family and refused that defense. There is a link in the post to the Bearing Drift article.

Maureen is as much behind this defense as her husband.

The people who are throwing Maureen McDonnell (the wife) under the bus are people like you. You contend that she’s some kind of hapless idiot who can’t defend herself. Meanwhile, she is part and parcel of a rather clever defense.

No, she’s not a helpless idiot, she has agreed to this defense but that doesn’t excuse McDonnell for going along with it and not protecting his family from this sordid Soap Opera.

Naive commentary at best. Those who actually know the family will concur that the Governor was always a humble, honest and dedicated public servant. There is nothing he would love more than to spare his beloved family this nightmare. It is not his choice to make.

What a crock. Every man has a choice to make. He is not a slave to his lawyers. He has had lots of choices to make and he keeps making the wrong ones and leaving a legacy of self-serving cowardice for his children.

That hasn’t stopped sycophants like Lynn Mitchell from trying to let Bob think he is still honorable. If someone close to him had the courage to tell him to cut this out, we would all be spared the indignities the McDonnell wish to visit on us all in this turgid defense

I did not say his lawyers don’t work for him. Simply, he is honest and the sordid details are the only defense he CAN give because it is the truth. The truth is not negotiable.

First of all, at the core of this trial we have a former Governor who is being prosecuted largely because of behaviors that the prosecution tied back to his wife. Mrs McDonnell was not an elected public official so they can’t prosecute her for corruption. It makes a lot of sense for the McDonnell’s to show that there’s a distinction between them, after all, we don’t charge a wife for crimes that her husband committed. As far as the children are concerned, don’t assume that they’re on the side of one parent against another. You’re trying to justify your opinions here in part by blaming their father for a trial that shouldn’t even be taking place and it’s hard to take any concern you may claim to have for their well-being seriously. They’ve clearly made the decision to keep themselves out of the public eye and I know they would appreciate privacy. It’s sad to see what they’ve had to deal with in 5 short years. I met them both when we were all at ODU but I knew him better than her. Mike and Cailin got engaged on Christmas of 2009, just weeks after we elected her dad and before he was sworn in and now they have the liberals dragging her into court because of a day that is supposed to be one of the happiest of her life. If you want to be mad at someone, be mad at them.

I have not assumed that the children were on one side or the other. I am sure that they are pained when either parent is criticized. Like you, I feel for the children, I always do.

I do not agree with you.I do believe the way she has been is what the witness’s have said.Sure the Gov should have paid more attention,but she knew what she was getting into when he ran for office.as far as the kids go.I’m sure they know how there Mother is.I pray this man is found not guilty.Don’t really care about his wife she was all about the money.

This “trial” should never have been brought in the first place.