Fairfax County Board of Supervisors is considering a new meals tax to impose on anyone eating out at a restaurant in Fairfax. This is coming right before the World Police and Fire Games come to town in 2015. With Fairfax as the host city, floods of athletes from police and firefighter departments worldwide will pour in; and with them the need to dine out will be great. Most of the out-of-towners, including family and friends of the participants, will be forced to eat all of their meals out, as few will have hotel rooms that offer kitchens. So the plan is to take advantage of dedicated servicemen who have chosen a career where risking their lives for normal Joe Six-packs like you and me is a standard part of the job description at an event where many of them are attending at their own expense. This simple supply and demand move aimed at a specific crowd for a windfall of dough is an irresponsible tax increase Fairfax can do without.

There is an episode of The Simpsons’ where the filming of Radioactive Man The Movie takes place in Springfield. In that episode all the merchants increased their prices and added the word “movie” to their ordinary products. The hardware store offered “movie nails” for $10 each. Same thing here. The difference, other than the cartoon v. real life contrast, is that Springfield was trying to rip-off wealthy Hollywood d-bags and Fairfax has set their target on police and firefighters. Would Fairfax have won the distinction of hosting these games had this tax been already put into place? From the athletes viewpoint I would hope not. So why does one of the most affluent counties in the country need to do this? This is a vulnerable group because these athletes and their families are at the mercy of the local restaurants to offer them something as basic as enough food to get by.

Letâ€™s certainly hope a Breathing Fairfax Air Tax, as athletes require more oxygen than most, wonâ€™t be the substitute should the meals tax fail. That episode of The Simpsons’ had a Leaving Town Tax; maybe the Board will like that one too. Oppose the meals tax and when dining out ask for ranch dressing with your sweet potato fries. 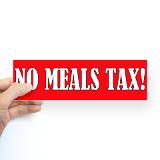 No Meals Tax was last modified: June 5th, 2014 by Taller Than Madison

This would be a double whammy for the towns in Fairfax, like Vienna, which already has a meals tax. It would be quite expensive to eat in restaurants there.