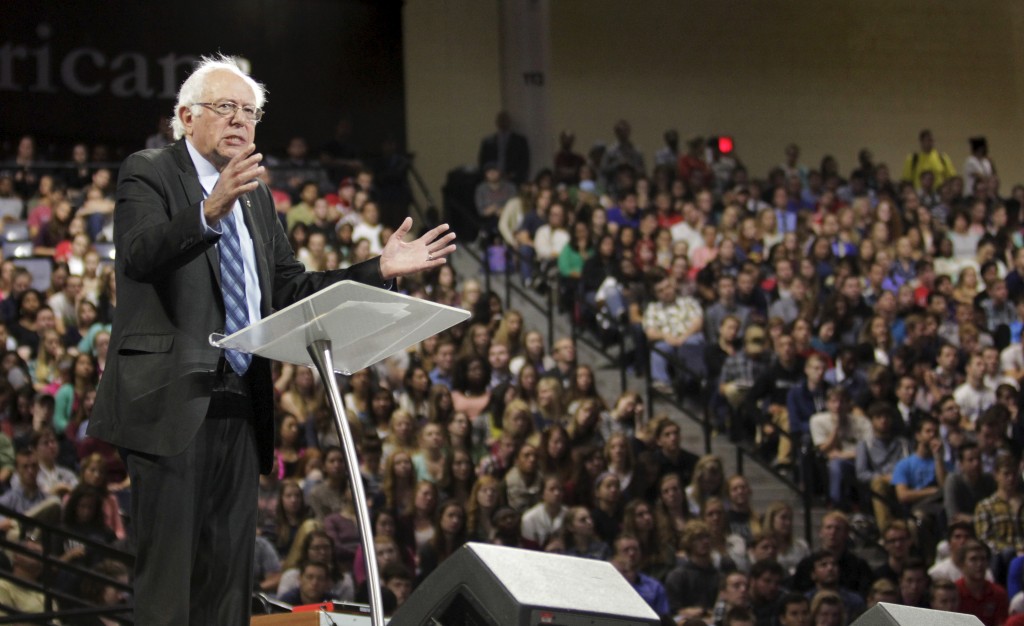 In March, Ted Cruz announced he was going to announce for president at Liberty University.  The Washington Post gave him pretty fair coverage of that pre-announcement announcement here.  Then, they gave shorter treatment here of the actual announcement, where they made sure to highlight certain aspects of the visit:

Cruz’s speech had the feel of a sermon at a megachurch, with the candidate wearing a wireless microphone and walking around a stage while delivering his remarks….

Seeing the American flags handed out left [Liberty student and non-Cruz enthusiast Luke Wittel] with bitter feelings of political exploitation. “Nothing makes you feel more like a pawn than being told to hold this and sit down,” he said. But, Wittel sees logic behind holding the announcement at Liberty. …

Democratic presidential hopeful Bernie Sanders sought Monday to reach out to a conservative Christian audience, arguing that however stark their differences on social issues, they should agree there is “massive injustice” in the country’s economy.

And then, in the 18th paragraph:

Students typically attend morning convocations at Liberty three times a week, and attendance is strongly encouraged. The university attempts to book an array of speakers, including the occasional politician. Officials said they have had Democrats speak before but never one seeking the presidential nomination.

No sense of injustice, no rushing to find students to discuss the indignity of being forced to listen to someone who is obviously a wacko, right?  And, instead of a “required” event, we find that attendance is merely “strongly encouraged.”

I think the message LU was sending its students was this — you better participate in the political process and defend your conservative values, because if you don’t, there are people like Sanders out there who are willing to take it all away!

MR. Sanders spoke at LU.
Trump spoke at LU two or three years ago.
Look at his take on clean coal.
Income redistribitution my but , a little American job protection from labor exploitation is a good thing!
American jobs Defending the American Dream
Trump in 2016

Realize that the objective of “journalists” is NOT to report what happened but to destroy those with whom they disagree and to whom they feel vastly superior.

It’s almost like there’s a conservative blackout from my Liberty sources and friends on this speech. Students & faculty that I know are not saying anything negative about Sanders and graduates seem to be pretending that this event never happened.

Exactly. I’m semi-believing it’s something like “this guy came in and invaded our sanctity” type of attitude.

when Bernie said he respected women’s rights & those of gays, the attendees fainted from shock