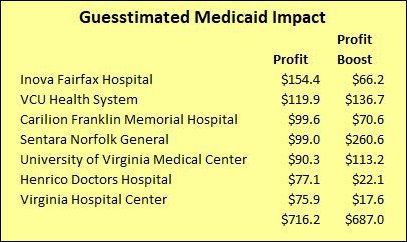 Medicaid Expansion and the Coming Gusher of Hospital Profits 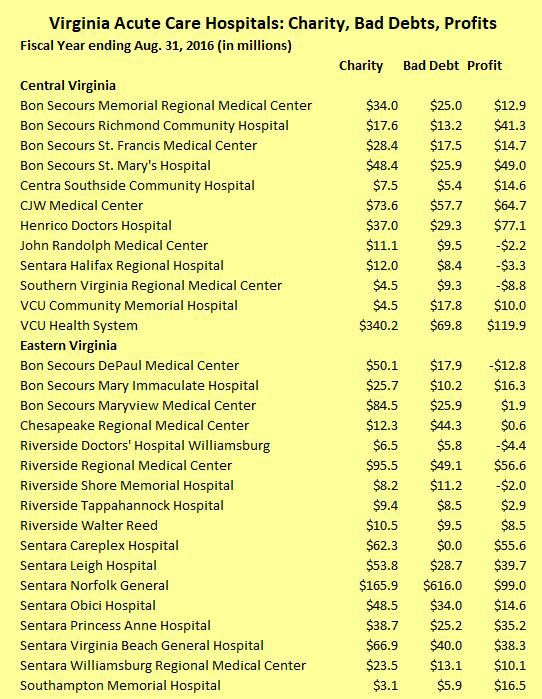 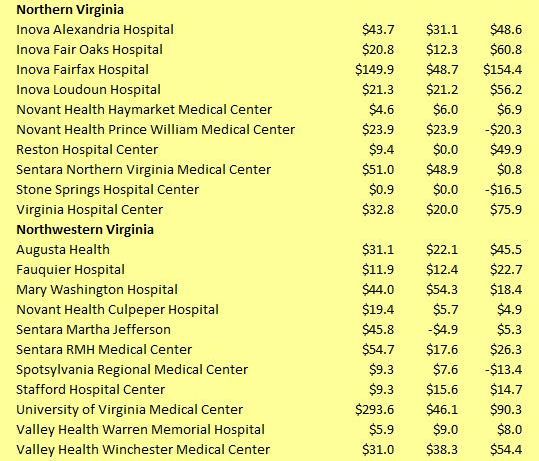 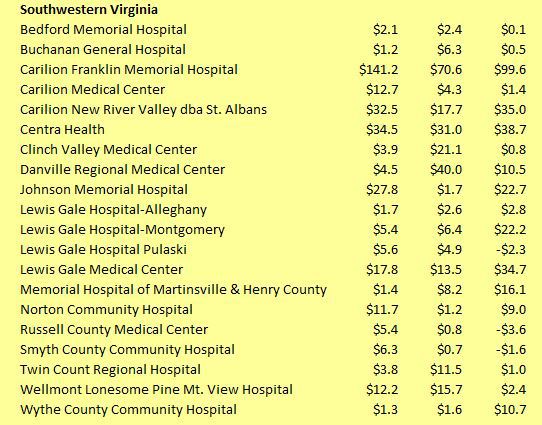 S&P Global Ratings, a big-three bond rating agency, predicts that Medicaid expansion will be “credit positive” for Virginia hospitals by reducing the level of uncompensated and charity care. Reports the Richmond Times-Dispatch:

The report does not change the current credit ratings of any Virginia health system, but S&P credit analyst Anne E. Cosgrove said the positive outlook “should help their bottom lines.”

“If you don’t have as much uncompensated care, this should help your underlying profitability,” Cosgrove said in an interview on Wednesday.

Virginia hospital officials played down the S&P announcement because they said enrollment under expanded Medical eligibility hasn’t begun and the benefits will vary among health systems depending on the mix of patients they serve.

Let’s get a sense of what the impact will be when an estimated additional 400,000 Virginians enroll in Medicaid. I have downloaded the latest financial data for Virginia acute care hospitals from the Virginia Health Information website, as displayed above. Collectively, they provided $2.6 billion in charity care and wrote off $1.9 billion in bad debts in the fiscal year 2016. They also made nearly $1.7 billion in profit (including “surplus” revenue reported by nonprofits).

Speaking in rough numbers, the federal and state budget for Medicaid expansion will inject about $3 billion annually into Virginia’s health system. I don’t know how that money is to be distributed between acute care hospitals, physicians, long-term care facilities and other medical providers. But for purposes of illustration and subject to verification, let us assume that one-third goes to acute care hospitals, thus reducing charity care and bad-debt write-offs by $1 billion. Virginia hospitals still will be providing a lot of free health care, but they could see a roughly 60% increase in profits.

So, yeah, I expect Medicaid expansion will be “credit positive” for the industry.

Now, let’s conduct another mental exercise. Let’s ask what the impact will be on Virginia’s most profitable hospitals. I totaled the charity care and bad debts for each institution and assumed that Medicaid would reduce them by one-third. Please note, these estimates represent no more than a Scientific Wild Ass Guess useful only for ascertaining order-of-magnitude effects. Here’s what the numbers look like:

As Bacon’s Rebellion readers know, I think profits are a beautiful thing. But some profits — those that arise from innovation, productivity, efficiency, and the like — are more socially beneficial than others. Profits that arise from creating monopolies and cartels, restricting competition through the exercise of political influence on government rules and regulations, and relentlessly jacking up charges to paying patients is not socially beneficial. The problem is compounded when the entities engaging in this behavior are nonprofit. Whatever else you say about the business practices of Andrew Carnegie, Henry Clay Frick and John D. Rockefeller, at least they paid taxes!

Bacon’s Rebellion will be watching hospital profitability closely. The big question: What will the highly profitable non-profits do with the gusher of money? Will they hold down charges to patients… or will they continue plowing the money into institutional expansion?

Update: Readers have pointed out that hospitals’ reports of charity care are wildly inflated because they are pegged to absurdly high nominal prices for care that almost no one pays. One implication is that hospitals are far less generous than they purport to be. Another is that my methodology for calculating the financial impact of Medicaid reform on profits is inflated by a similar amount.

Department of Social Services officials are claiming the projected LOCAL match to my county from this Medicaid expansion will only be an extra $200,000 a year starting in FY2020. That is added to the almost $1 million we are all ready funding. I have a funny feeling it will be much more with the efforts they are taking to find new applicants. Every state legislator that voted for this has to be held accountable for yet another unfunded liability being pushed onto our local governments.

Remember
“not just the terrorists themselves but those who harbor them”

The lobbies for hospitals, doctors, and pharmas pushed very hard for medicaid expansion.

Gee wiz I wonder why. I’m sure it was only from the depths of their bleeding hearts and had nothing to do with the money they will rake in.

And money from medicaid expansion is not “‘profit”. it is our personal money going directly into their pockets.

In Virginia both sides took in money and are able to use it for personal use.
When we continue to blame just one side we on combat 1/2 the problem and the money shifts.
Also I am sure Corporatist would love nothing more than to decrease Healthcare cost and shift it to the taxpayer.
Example;
Vogel took a pile from Republican Senator Newman, Delta Star , oh they ate also a Union shop.

Ah the lives of the bought and paid for.
Remember snakes just don’t live under one kind of rock.
The coin today still has two sides; one Democrat the other Republican. Flip it, no matter which side lands up we loose.

Indeed, let’s do away with for-profit healthcare!!

Sure. We’d all love to have the lousy health care that the VA has been providing our veterans for years. And if our veterans, a well-respected and deserving demographic, can’t get decent care, what are the chances that average Janes and Joes will get adequate care if the government takes over health care?

You mean like Grandma Jane and Grandpa Joe? They seem to be pretty happy with their government funded healthcare.

Yes, I hear nice things about the Cuba and Venezuela model.

Yes, because in the entire developed world with socialized medicine these are the only two potential models…!!

These are the ultimate and penultimate models. With that said, Cuba does project a great number of their doctors to underdeveloped places in Latin and SA, and elsewhere.