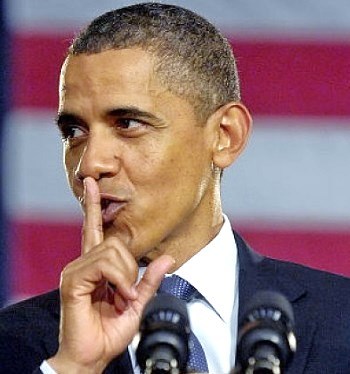 If you go to the Virginia Legislative Services website and scroll through the list of bills up for consideration this session, you would eventually come across SB 162.  In that list the bill’s title states, “Constitutional Amendment; special funds for transportation purposes.”  Unfortunately, when you click on the bill number and start reading a summary of it’s actual purpose, you find something completely different:

That sounds a lot like Medicaid expansion to me.

Now, if you are a watchdog group that is fighting for or against certain issues in Richmond, you most likely don’t have time to read through the summary of every single bill that is introduced for each session.  You are most likely going to scroll through the list of bills and their titles to flag the ones that might have something to do with an issue you are concerned about, which makes this next question a very serious one:

Was this Medicaid expansion bill given a completely inappropriate title by mistake, or on purpose?

This would not be the first time subterfuge was attempted to slip Medicaid expansion into Virginia.  The first attempt was an underhanded move to sneak it into the budget that was beaten back by Sen. Dick Black (R-13) with a hat-tip to TBE’s own Steve Albertson for the legwork and research he did on the issue.  Rumors around Richmond this year say that newly elected Governor, Ralph Northam, has made Medicaid expansion a priority, and there may be numerous quiet attempts to push it through, or at least get the Camel’s nose under the tent.

The bill is coming before the Senate Commerce and Labor Committee this Monday, Jan. 15th, but since the bill title labels it as a transportation funding bill, and not a Medicaid Expansion bill, it’s highly likely the troops have not been notified about this one.

Do the Senators on the committee a favor and let them know about this bill’s mistaken identity…and then tell them you want this bill to die a quick death.

UPDATE:  After TBE published this article, the Senate changed the title on bill SB 162.  It originally looked like this: 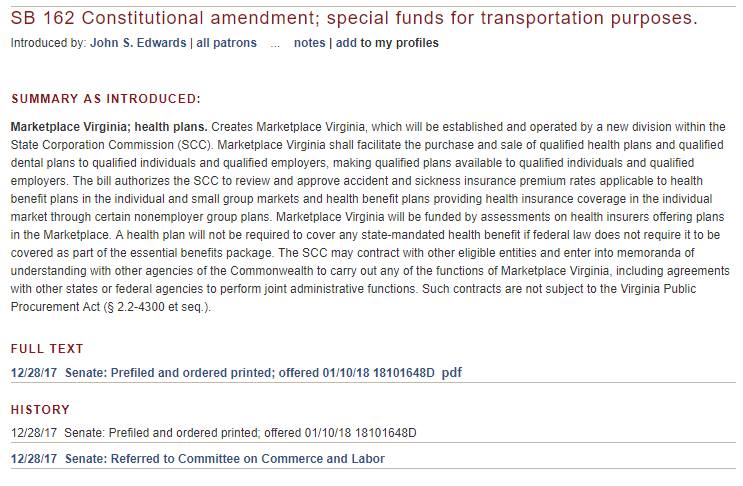 The title has been changed to reflect the content as seen here.

That doesn’t look like Medicaid expansion… it is another expensive piece of Obamacare that Virginia has thus far refused to fund: a state run and paid for “marketplace” for Obamacare plans.

The complete list of the Senators on the Commerce and Labor committee is here, http://lis.virginia.gov/cgi-bin/legp604.exe?181+com+S2 Call or email them immediately!

Short version – it was great on many different levels.

I was there to gather signatures for the primary. Now I have done this before but this weekend was the best.. Collected a huge number of signatures. We were collecting for Corey Stewart and Mary Jones.. E. W. Jackson also had a table at the show and I would guess that they gathered a bunch too .. I went over and signed and introduced myself to E W Jackson. He was there all day Saturday. Mary Jones was there both Saturday and Sunday. Mary is running against democrat Scott Taylor in the 2nd congressional district. Corey Stewart was there Saturday afternoon between other events he was attending in this area.. Corey is very popular in this area.

This show had a lot of people. And they seemed to be spending money like a bunch of drunken democrats with wheelbarrows of tax payers money. Talked to one friend who sells knives and such at these shows, He told me that this was his best show for sales. Both of us will be at the SGK Virginia Beach Gun Show on February 3-4 at the Convention Center. Wonder how that one will turn out ??

Isn’t the complete Va General Assembly a Masquerade?
4 years McDonnell and Cuccinelli and all they stood against is Medicaid growth. Then Cuccinelli looses to McAuliffe and once again all Republicans spoke out against once again is Medicaid growth.
Trump gets elected to MAGA by being pro American job growth and working toward ending illegal immigration.

If citizens wages are not growing and even worse they loose their jobs to offshore outsourcing and illegal immigration would they not naturally look for some form of medical support for their family?
Well where the hell is the E-Verify bill?
What is it disguised as?
What no E-Verify bill , it appears that Va Republicans are not focused on the idea to MAGA.
Are the Va Republicans waiting on the Fed?
One would have thought after loosing to Trump and 2 Gubernatorial elections we would see some sort of E-Verify legislation.
Well that is just a shame.

Would have Corey Stewart brought forth E-Verify legislation if he held Delegate Nick Freitas seat?