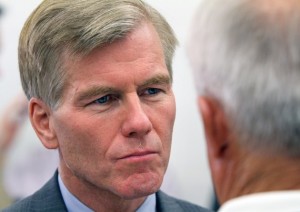 News of former senior McDonnell Administration officials now lobbying in favor of Medicaid expansion has shocked Virginia conservatives. But, unfortunately, it shouldn’t come as a surprise.

When I discuss Medicaid expansion in Virginia with people wondering what all the controversy is about, I explain (right before their eyes glaze over) that it had its roots in actions taken by Republican Governor Bob McDonnell.

“But McDonnell was against Medicaid expansion,” they’ll say, “he said so himself.” And so he did…but he also said something else, something that is central to the way the Medicaid debate continues to unfold.

“Without significant reformâ€¦it would not be responsible to expand Medicaid,” McDonnell told WTOP radio just weeks after the Supreme Court ruled Medicaid expansion was an issue for each state to decide.Â

[Interesting note: McDonnell was so motivated to continue to say expansion was mandatory (which gave him cover to do what he wanted to do), that he earned a PolitiFact “Pants on Fire” rating on the issue.]

The “reform then expand” mantra is just spin intended to make it seem like McDonnell and certain other Republican leaders are against Medicaid expansion, while leaving a back door open for expansion to happen (i.e., “reforms” that would either let them call the expansion by another name, or that would save enough money to cover the eventual drop in federal support for the expanded coverage). Examine the public statements carefully, and when you see comments about the need for reforms first, right after it you’ll almost invariably see an indirect commitment to expansion—or at least the absence of principled opposition to it. Call it the AMINO approach: Anti-Medicaid In Name Only.

Think I’m being too hard on former Gov. McDonnell? Think again. Starting as early as mid-2012, McDonnell’s administration worked feverishly, hand-in-glove with the Obama administration, to see to it that Virginia would be ready to take on this massive new entitlement as soon as funding was available in January 2014. This effort included a number of modest reforms, and seeking all the necessary waivers and approvals from the Center for Medicare and Medicaid Studies. This led the Obama administration to even describe Virginia as “committed to expanding Medicaid coverage” as late as November of last year. 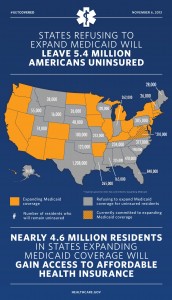 Put simply, the only reason we’re even having this conversation about Medicaid expansion is because the McDonnell administration already paved the way for it. Put another way, a REPUBLICAN administration—aided and abetted by the taxportation deal last year that included budget language authorizing the McDonnell’s team to complete all the necessary work to get ready for expansion—is responsible for helping Terry McAuliffe fulfill his number one campaign promise. Virginia would be nowhere near being able to expand if McDonnell’s people had not been laying the necessary groundwork for most of the last two years. (If you want to see what a principled opponent of Obamacare’s Medicaid expansion, look at Bobby Jindal in Louisiana). 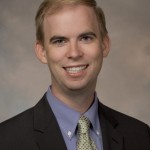 Who did all this work for McDonnell? His primary Medicaid expansion architect was Health Secretary Bill Hazel, who Governor McAuliffe reappointed to the position as the guy best positioned to continue the McDonnell administration’s good work in this area. Among Hazel’s team was his chief deputy, Matt Cobb.

It seems that the guy who was just a couple of months ago the number two McDonnell administration official in charge of preparing for Medicaid expansion is now being employed as a lobbyist to do the same thing. From Julian Walker:

They are Janet Vestal Kelly, a past secretary of the commonwealth who attended Regent University, and her husband, Ryan; former U.S. Rep. Thelma Drake of Norfolk, who was McDonnell’s public transit director; and Matt Cobb, a deputy health secretary under McDonnell.

So, this really should not come as a surprise.

Here’s a few other things that shouldn’t be a surprise as we near the open of the special session of the General Assembly to deal with the budget and Medicaid expansion:

Unfortunately, very little is surprising on this issue. However, one thing that is surprising, and downright vexing, is just how successful the “reform then expand” sleight of hand has been in convincing Republicans that the people using it are somehow actually opposed to Medicaid expansion. Surprise, surprise! They’re not.

[…] some sort of kabuki theater. And that may be true for some Republicans. It was, after all, the Republican administration of Bob McDonnell that got Virginia to a place where expansion was even possible, and it was the Republican-passed […]

Reply
WaPo Finally Catching on to the Medicaid Expansion Endgame - The Bull Elephant May 27, 2014 at 3:31 pm

[…] done entirely by the Governor’s own hands. Hopefully, soon, she’ll also catch on to the real the roots of our current […]

[…] MostÂ Republicans oppose Medicaid expansion and want to pass a clean budget to keep all the monopoly trains running, utilities on, and salaries paid. Â Although we can’t let our guard down with Republicans, because of what is reportedÂ hereÂ andÂ here, they are at least holding the line now. […]

[…] Why is the state of Virginia even in a position to have to discuss expansion? It is because former Governor Bob McDonnellâ€™s administration paved the way for it by the taxportation deal last year that included budget language authorizing Governor McDonnellâ€™s team to complete all the necessary work to get ready for expansion. Virginia would be nowhere near being able to expand if Governor McDonnellâ€™s people had not laid t… […]

Blah, blah, blah.. It’s all transportations fault. Keep it up Steve. Really tired of hearing this. What was your solution to the transportation problems in Virginia, Steve? Oh, that’s right, you haven’t been elected to anything or ever had to make the hard decisions. Easier to throw stones that way? Hope you are happy with your new delegate, which is what this kind of divisive rhetoric has brought about.

C’mon, K. This isn’t divisive rhetoric, and I’m not rehashing the transportation debate. I’m just pointing out how this happened. And I’m very happy to have had the delegate I did.

Aren’t we allowed to disagree with our brethren sometimes? I’m against Obamacare expansion. Some people aren’t. Why is it not OK to point that out?

[…] proposal is getting some traction, with Bearing Drift blogger Shaun Kenney endorsing the plan and former aides to Governor Bob McDonnell doing a hefty share of the […]

Anyone wonder why I have zero mercy for or tolerance of fake conservatives, there you go.

Your reporting on this is very detailed and helpful. I guess it isn’t expansion if it’s reformed? (sarcasm) Will there be any consequences for Virginia Republicans?

[…] Steve Albertson over at The Bull Elephant takes the bait on the talking point that have been circulated to Virginia conservative bloggers this week, and the target? Â Well… McDonnell staffers: […]

[…] The Bull Elephant today voices concern about the commitment of the House in standing fast, however. We must keep up the pressure! […]

It’s hard for people to admit they were fooled by someone they believed in. I saw this sleight-of-hand right away when McDonnell used this language. Sadly, he is not the man I thought he was. When observing him and Jindal together at a 2012 campaign stop, I would tell which governor was the fake – ours.

â€œReform then expandâ€ they’ve been doing that for a while now.