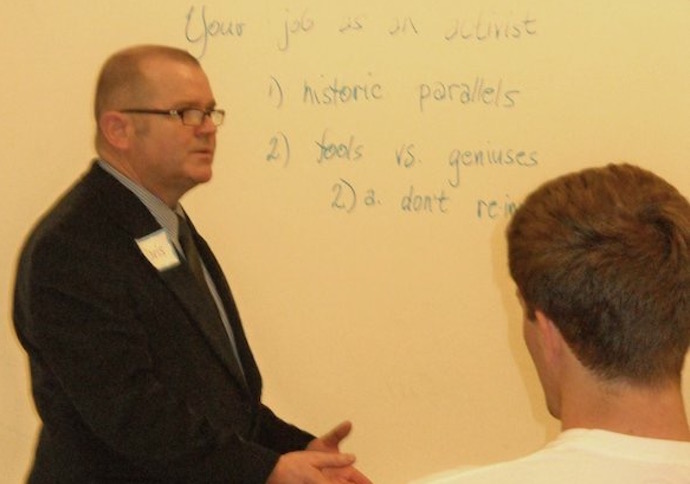 UPDATE: Memo to Michael Del Rosso: Deceiving Voters is Not the Right Way to Win

This past Friday, an anonymous email addressed to “5th District Convention Delegates” made the rounds. The email purported to be an endorsement of a particular candidate for the Republican Party of Virginia’s State Central Committee who will be on the ballot at the district’s May 14 convention. It came from an alleged organization calling itself “Fifth District Republicans United.”

The entire email is mostly repeated in a flyer that was attached to it, which we’ve embedded below.  Smart observers of the current race to replace retiring GOP Congressman Robert Hurt can deduce the motivation from this line of the original email:

Right-wing elements viciously attacked Rep. Robert Hurt in 2014 when he was involved in “slating” in the 5th District. Does anyone need to be reminded that “slating” was a perfectly legal and legitimate tactic in the Virginia GOP? When hard-right and Tea Party extremists savagely criticized Rep. Hurt for his involvement, Sandra Warren bravely stood by our Congressman. Her loyalty is total, complete, and absolute. Likewise, Sandra will steadfastly stand by either Joe Whited or Tom Garrett, whichever is our nominee for Congress.

(Emphasis mine).  See what they did there? (1) Pick a divisive and unpopular issue tied to the unpopular candidate; (2) celebrate that the candidate wholeheartedly embraces the wrong side of the issue; and then (3) achieve the real aim of the piece, which is to make it seem that people who hold that odious position will only support Joe Whited (the most moderate candidate in the race) and the author’s real target, Tom Garrett.

Why Tom Garrett?  Well, you can tell who is in the lead in a multi-candidate race to be decided at a convention just by looking at who is taking the most incoming fire from his rivals.  As we like to say from time to time, an elephant doesn’t swat flies.  Conversely, those who are at most risk of losing tend to take the risk of alienating supporters of the other candidates (whose support they’ll need on second and third ballots) by publicly attacking them.  To minimize that risk, one can mask the attack to make it look like it didn’t come from your candidate, so none of the fallout comes back in your candidate’s direction.

This is why the email is sent from an address at a privately registered domain that was set up shortly before the email was sent.  It’s also why it was attempted to be sent anonymously.

Note that I said, “attempted to be sent anonymously.”  Unfortunately for Tom Garrett’s chief rival for the nomination, Michael Del Rosso, his team is not very good at the black bag stuff.  His consultant left his name in the metadata of the attachment. 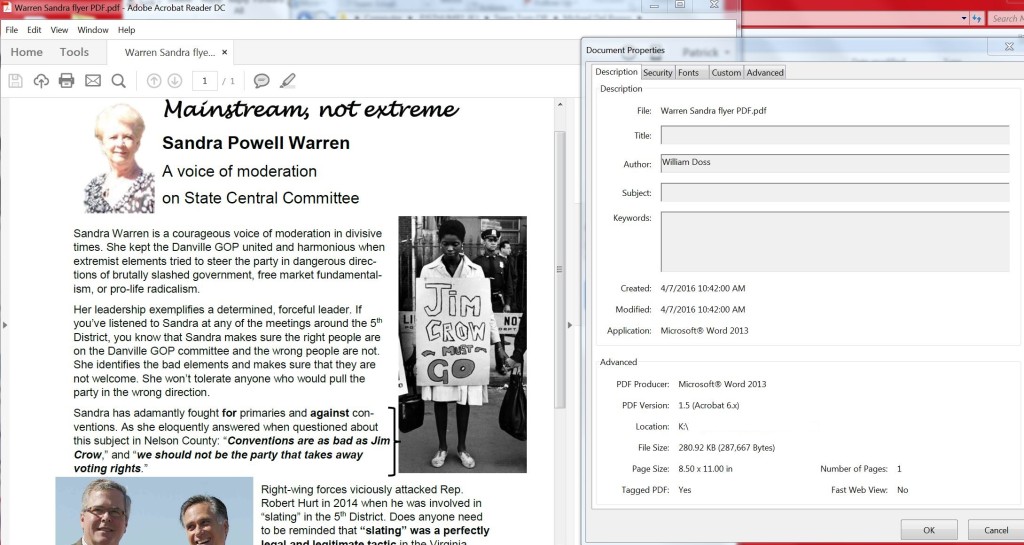 William Doss, aka William Christopher Doss, is better known simply as Chris Doss.  Doss formerly worked for Speaker Bill Howell‘s think tank, had a long tenure at the Leadership Institute, and has worked on a “gazillion” campaigns.  (Someone thought so highly of him that they tried to enter a fawning bio of him on Wikipedia that appears to have been removed because the subject did not meet the “notability” threshold to have his own Wikipedia page).  This year, he’s worked for a candidate in Virginia’s 2nd Congressional District, and for Del Rosso.

Below is partial audio of Doss acting as a surrogate for Michael Del Rosso in Danville earlier this year. (You may need to turn your sound volume way up).

My friends, this is not the way conservatives should conduct themselves, particularly when such dishonesty is aimed at a conservative audience to deceive them about a conservative candidate.  If one wants to attack Tom Garrett, do it honestly.

Don’t intimate that he supported slating (he was the only elected official in the 5th District who came out strongly against it, and endorsed the conservative, anti-slating candidate for 5th District chairman).  And don’t imply that he sides with those standing against “severely reduced government, free market fundamentalism, and pro-life absolutism,” when he’s got a legislative record that makes him a target of those kinds of moderates.

Candidates typically make up false narratives about their opponents when they don’t have much of a record of their own to run on, and they pull dirty tricks like this when the conventional attacks aren’t working.  I doubt that’s the message Michael Del Rosso wants to be sending.  So, did he know about and approve of the false flag operation by Doss?  Does he condone his team’s tactics in this instance?  A supposed graduate of NYU should know better.

We’re happy to post in this space any response from the Del Rosso campaign.

Post Script: I have to admit, the email from Doss would have been hilarious parody, if he hadn’t attempted to pass it off as genuine.  Kudos to Doss for his creativity, at least.