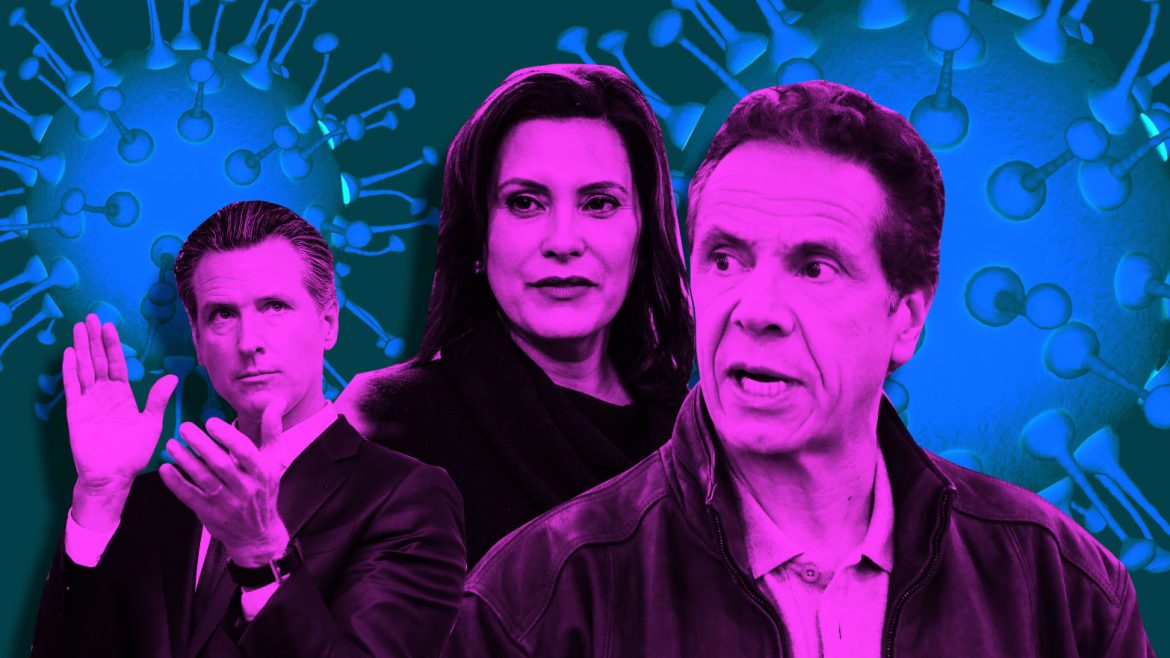 Democrat governors, not Trump, destroyed businesses for good through their reading of the guidelines and "the Science." (Photo: The Daily Beast)

Memo to Trump: Governors wrecked our economy, not you

President’s guidelines were taken to extremes, mostly by Democrat governors

The first televised debate between President Trump and Democrat opponent Joe Biden is scheduled for Sept. 29 at 9 pm EST, and viewers can be assured there will be questions about the economy and the COVID 19 pandemic.

Undoubtedly, Biden will blame the 10% unemployment rate and massive layoffs on Trump’s “mishandling” of the coronavirus outbreak, and cite statements in Bob Woodward’s new book, that he didn’t want to “panic the country.”

The president’s COVID actions belie those words.  The World Health Organization, relying on China’s “assurances,” did not declare COVID 19 a pandemic until March 11, 2020.  But in early February, Trump stopped air travel from China, the EU in mid-March, and created the COVID 19 task force in early February.  NIH a month before approved a grant to the firm Moderna to develop a vaccine.

As for the economic fallout, it is important for the president and his supporters to stress this – governors, not the president, diminished the great economy that existed prior to March when lockdowns and stay at home orders were issued.

It was the governors using their absolute powers to handle “emergencies” without any review by their respective state legislatures that sought to “out Newsome” Gavin Newsome, the liberal governor of California, who led the way on lockdowns in early March.  I also believe a number of these governors instituted draconian closures to hurt Trump and GOP chances at the polls – and make the people more dependent on government.

Indeed, Trump’s bans on air and cruise travel seriously hurt those carriers, plus hotels and tourism.

However, it was the governors – not Trump – who mandated no gatherings beyond 10 people, thus killing hotel meeting and convention revenue.  The governors, not Trump, decided which businesses were “essential” and which were not.  It was the governors who closed the restaurants, retail stores, theaters, bars, beaches and historic sites and museums.

Recently, “The Virginian Pilot” published a list of businesses that are closing PERMANENTLY in Hampton Roads.   A large number are retail stores, some of which were on the edge before the pandemic due to the growth of online shopping, but also a huge number of restaurants, including chains like I-HOP, McCormick & Schmicks and Ruby Tuesday.

This wasn’t Trump that did that;  but Gov. “Blackface” Northam.

Trump’s March 16 “ Coronavirus Guidelines:  30 days to slow the spread” say nothing about closing businesses, but to “avoid” indoor dining, plus “avoid”  social gatherings of 10 or more.  In other words, the guidelines sought voluntary compliance, not compulsory closures.

So, it was the governors like Blackface who stretched the guidelines to kill businesses for good, while allowing state liquor stores and lottery centers to remain open and abortions to proceed.   Many states also failed to keep infection out of nursing homes – an area the guidelines do address.  Some 45% of COVID deaths were elderly congregate-care residents.

The impact to the nation’s wellbeing has been dreadful.  About 56% of U.S. Gross Domestic Product (GDP) is in 10 states, six of which have Democrat governors, according to Wikipedia.

How can we recover if two of the top 3 states for GDP are still locked down? What helps a recovery more — people working or more federal stimulus debt?

But according to a detailed article in “The Wall Street Journal,”   no nation has done lockdowns for a pandemic, even during the 1918-19 Spanish flu, which killed nearly 50 million worldwide  The Journal cites Taiwan, South Korea and Hong Kong as “early examples of how to stop Covid-19 without lockdowns.”  Sweden is praised for not locking down, but imposing only “modest restrictions… Sweden has suffered more deaths per capita than neighboring Denmark but fewer than Britain, and it has paid less of an economic price than either…”

But in the U.S., it was the governors and each state that carried out lockdowns and stay-at-home orders in 50 different ways.  This is why they, not Trump, deserve the heat.

However, so far, I do not see the Trump campaign focusing on the governors, perhaps because a number of GOP governors used their emergency powers to mete out draconian lockdown measures, too.

And, the governors can argue they were just following the president’s own  reopening guidelines  , issued in April.  But the evidence shows arbitrary and capricious actions by the governors in this regard.

For example, Blackface  allowed parts of Virginia into Phase 3, and then pushed back on reopening in Hampton Roads when he saw the numbers go up (probably due to more testing being done).  Obviously, nobody bothered to ask if these cases were truly serious.   Virginia ranks 29th in deaths per thousand among the states.

Hawaii’s Democrat governor in late August imposed a 14-day quarantine for anyone arriving by air in Honolulu – thus closing hotels and ruining travel plans for many – even though Hawaii ranks 50th in COVID 19 deaths per 1,000 residents!

By late March, based on New York data, and data oversees, it was clear 90% of deaths were due to age and underlying health conditions, and that 95% of COVID cases were not serious.  Hence, for most states, these broad-based lockdowns were unwarranted.

These broad-based distancing and Stay-at-home measures were concocted by Anthony Fauci, Deborah Birx, the CDC’s Robert Redfield and other public health bureaucrats who are taking a cue from the AIDS epidemic in the 1980s and 1990s and telling us we are “all at risk” when the “mitigation” measures could have been targeted on the people most at risk.  The governors, not Trump, became their emissaries.

I also believe the federal guidelines also are about C.Y.A., as the NIH, CDC, FDA and the WHO failed miserably to see COVID 19 as a threat early on .

Meanwhile, the governors have failed to protect the groups at most risk (i.e. the elderly).  We now cannot “fully reopen” until there is a vaccine – I remain skeptical one workable one will get out there soon.

So, I hope Trump and his campaign will “get the memo” and start turning up the heat on the governors and note that the Democrat “solution” includes job-killing higher taxes, “living wage” minimums of $15 an hour and defunding or defanging the police.

Trump is tough for voters to swallow but he’s our only hope to avoid a dark socialist future.

Memo to Trump: Governors wrecked our economy, not you was last modified: September 21st, 2020 by Guest Contributor Ken Reid