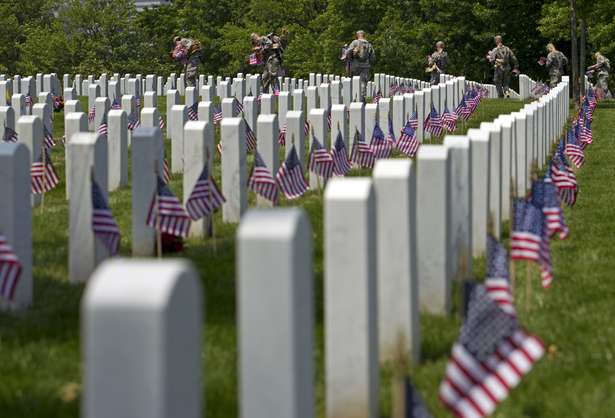 On previous Memorial Day’s, I’ve written about my high school buddies, Greg Conant and Jimmy Plumlee, both of whom fell in combat, one at Hau Nghia and the other at Phuoc Long, Vietnam, 9,000 miles away from the high desert of West Texas; and my own father who died unrecorded in that war.

I’ve also attempted to honor the warriors of this new century by detailing my interviews at Walter Reed National Military Medical Center in Bethesda, Maryland, with the most extraordinary men and women that our nation produces – whose bodies are broken and shattered and yet whose spirits are as hard and as brilliant as diamonds. They don’t consider themselves heroes; they’re quick to tell you that the real heroes did not come home from the mountains of Afghanistan, or the desert and uplands of Iraq.

Visiting the various memorials around Washington, D.C. you are reminded time and again of the great cost of freedom; and that duty, honor and sacrifice aren’t merely words etched in granite – they are truths that are stenciled into history with blood.

Perhaps every generation thinks it’s asking those questions for the first time. But, it’s not obvious that the nation has ever been so divided since the Civil War on who we are as a nation; so separated by those who want and those who produce; so torn about what America is at its core; so fearful of what is slipping away – having nothing to do with race or background – but about the nation’s Judeo-Christian founding ethos being hollowed out by materialism and determinism.

This Memorial Day finds the nation roiling in real and imagined controversy, fake news, hype and propaganda. What America has always been as a nation is at war with what some want it to become.

A new President wants to preserve and build upon what the last President wanted to dismantle and replace. Behind that battle line, an insular Capital City largely ignores those it is charged with serving, while the nation’s other institutions become increasingly detached and self-serving.

In the tug-of-war freedom still prevails, but every day there are new voices and powerful forces demanding its diminution so that the state might grow – claiming that restricting freedoms that we have always known as inalienable natural rights is the only way to integrate ourselves into a new world order that does not share, nor care about those individual rights. Only some deserve unfettered access to liberty, according to the new elites.

Our schools have failed to teach even the basics about the origins of those rights and the battles to secure and keep them. Worse, more often than not, they strip that national heritage from the history they teach as though it’s shameful, instead of heroic. Even the churches have largely ignored the battle, hoping to be left untouched, a position history suggests can come to nothing but a bad end.

Does this Memorial Day in 2017 find half the nation grateful and half the nation ambivalent, at best? Perhaps that’s too broad, but not by much. With every passing day the “greatest” generation passes on and the baby boomers and their children take up the task of carrying the heritage forward. It is not at all clear they collectively are willing or able to do so.

This Memorial Day is a stark reminder of the real cost of freedom. It carries with it a warning that those freedoms are not inherited generation to generation – they are fought for.

Thanks guys you put your life on hold to defend us , our way of life , our freedom never to return.
The most Nobel profession is that American warrior.
I am not as tech savy as you all here at TBE but this is
a perfect place to copy a poem;
Flanders Fields.