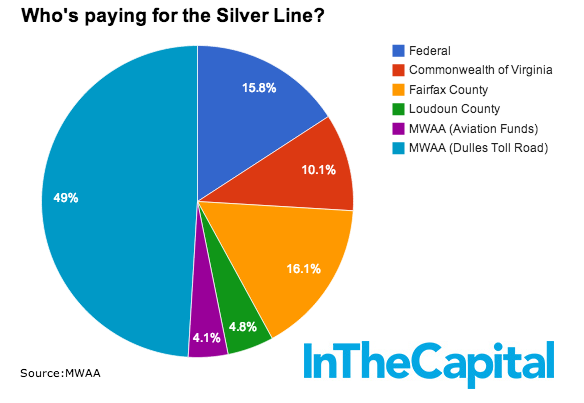 Metro Board Member Suggests Killing Metro to Loudoun, McAuliffe calls it a ‘joke’

If Northern Virginia wants to finish the project, Price said, it should be willing to pay for its operations by approving a tax or other dedicated funding source for Metro. He said he will propose that Metro discuss the proposal as early as Thursday’s board meeting.

“Based on my analysis, we ought to look at forgoing the Silver Line,” Price said. “How can you continue to expand when you’re currently in a deficit situation and the expansion project is going to put you further into deficit?”

People in Northern Virginia and Tidewater already pay 20% more in sales tax than the rest of the state for transportation projects. We pay 5% on everything we buy while the rest of the state pays 4%. That increase was supposed to cover the costs of metro but now they want another ‘dedicated funding source’ in the form of another increase in sales tax. Metro is a bottomless pit where we continue to throw money while the system continues to fail.

When the Governor was asked about the stopping phase II of the Silver Line to Loudoun, he called the Metro board a “joke”.  From the Washington Post:

McAuliffe described the idea as “goofy, naive political theater,” then added, “if the board had that thought process, maybe they should have done this five years ago, or 10 years ago?”

Yes!  Exactly! Why didn’t they halt the Silver Line expansion 5 years ago? Surely the Metro board saw this disaster coming.  In 2012 we tried to tell the Loudoun County Board of Supervisors that the Silver Line expansion was mistake.  The board, lead by Chairman Scott York, pushed ahead anyway and approved the expansion with a 5 to 4 vote.  Supervisors voting for this mess were Scott York, Shawn Williams, Matt Letourneau, Ralph Buona, and Ken Reid.  Only two remain on the board, Latourneau and Buona. Rumors continue in Loudoun that one of them will run for Chairman in coming years. Good luck with that. Taxpayers in Loudoun have loooong memories.

Meanwhile the current Silver Line continues to be overcrowded and to suffer more delays.

This boondoggle will continue to cost Loudoun taxpayers dearly.  Only 1-2% of Loudoun citizens are expected to EVER ride the metro but all of us will pay and pay and pay.  Let’s support Corbett Price’s proposal and stop this disaster from coming to Loudoun now!

I’d be willing to bet that the Silver Line will get shut down. The logic behind that is that WMATA (i.e. the operating arm of Metro) is running short hundreds of millions of dollars annually and they have been doing it for years. You can only dig the hole so deep before people stop lending you money and their frantic cries indicate that they are at that point. WMATA has no investment in the building of the Silver Line. Another entity, MWAA, with a consortium of others actually fund the construction. So, WMATA doesn’t loose a dime shutting down the Silver Line and actually saves money because they lose money on all operations. In WMATA’s words, they would save $50M/year by shutting down the Silver Line. Regarding the repercussions of shutting it down, Price said plainly, “That’s Virginia’s responsibility. That’s not Metro’s.” He is right. WMATA loses nothing from a shutdown and has much to gain.
Furthermore, we see the future tactics for subsequent revenue shakedowns: gives us more money or we will cut off your service. If we continue, we will see this tactic deployed over and over again.

shoot … that’s fine with me. Metro is a boondoggle and I’m not sure what the point of the Silver Line is other than making sure rich white liberals in Reston can get to Nats games.

In reality, McAulliffe IS the joke!